Hisense South Africa has announced the Infinity H30 - a smartphone with a 6.5-inch FHD+ display and a 4530 mAh battery. The display has a small notch that houses the 20MP selfie camera with an f/2.0 aperture, while on the back there's a 16MP+2MP AI camera combo with a fingerprint sensor. The model features a physical Smart Button that offers 8 different scenarios for more intuitive interaction with the device, which is available in Ice Blue and Violet Ocean colours. Under the hood, a Helio P70 chipset ticks paired with 4GB of RAM and 128GB of storage. The Infinity H30 runs on Android 9 Pie, has a single-SIM and a microSD card tray, USB Type-C port, 3.5 mm jack. Pricing and availability are TBA. 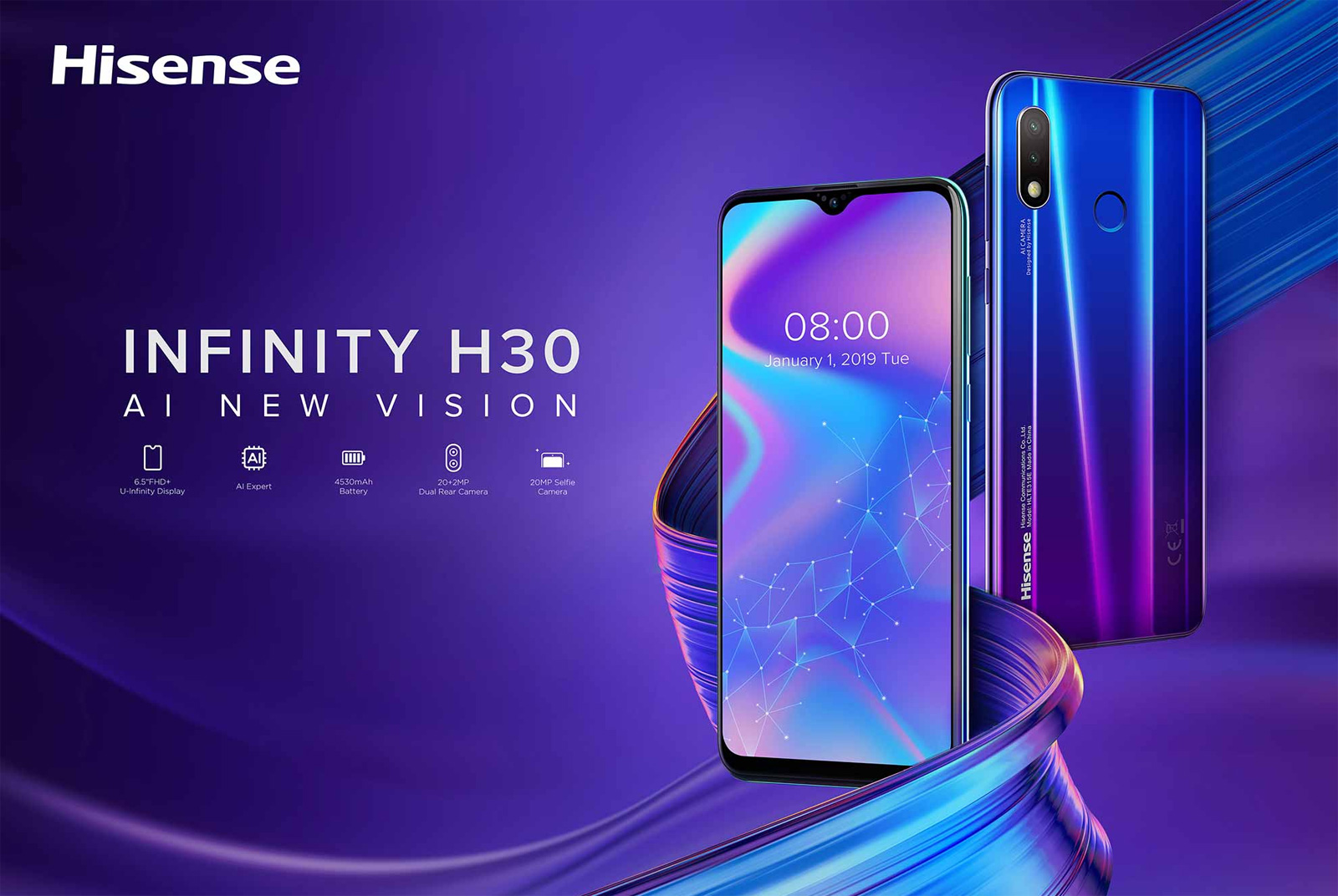 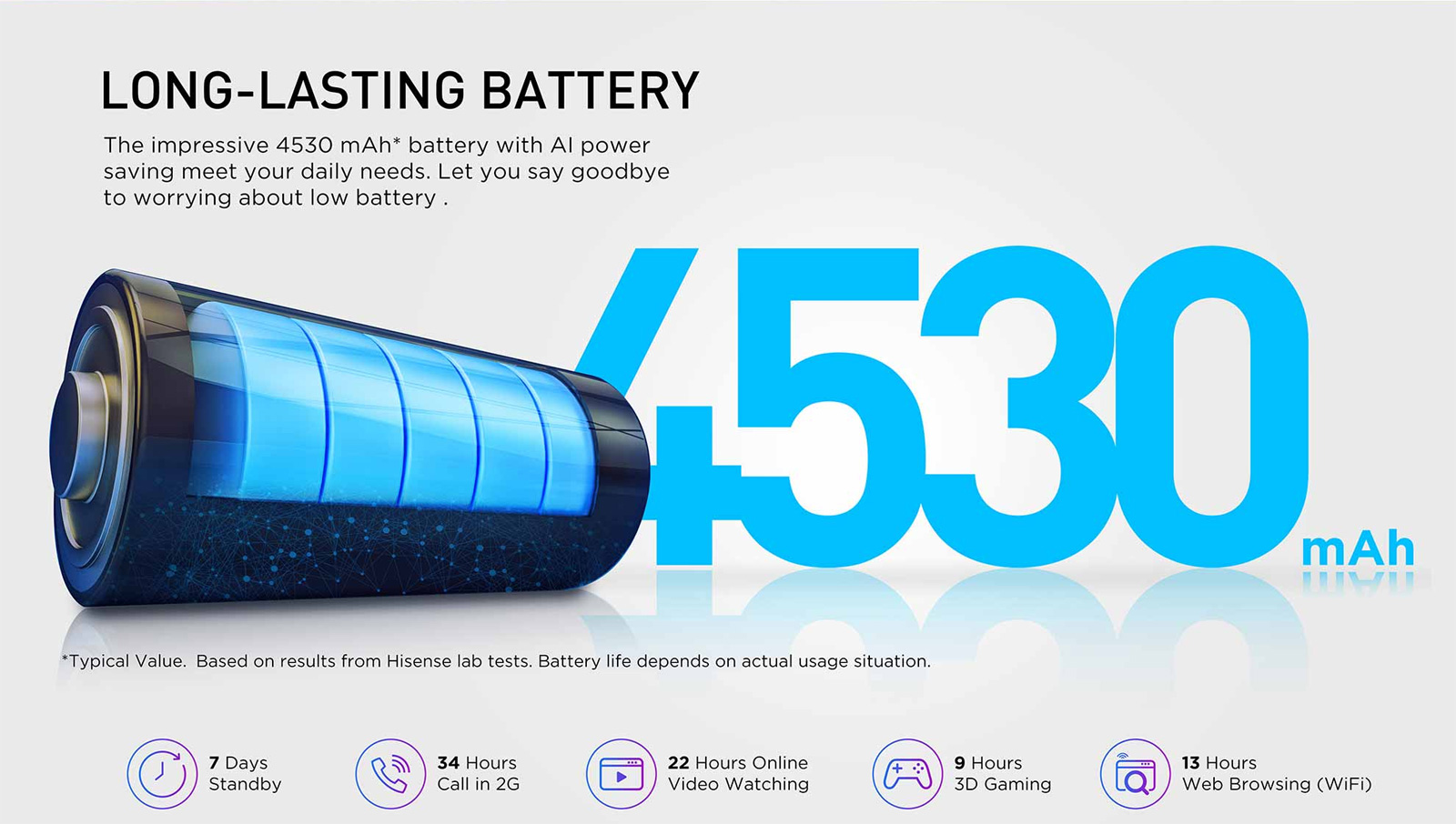 Hisense announced the King Kong 6 with a 10,010 mAh battery and the Hisense F40

At a dedicated press conference, Hisense has announced the King Kong 6 and Hisense F40 smartphones. The first model has a built-in 5510 mAh battery and a charging "armour" with a 4500 mAh capacity, so the total capacity is 10,010 mAh. When you need a thin and handy smartphone on the go, you can use it without the charging armour. When you need battery stamina for days without a charge, then you can use the charging...

Hisense has announced two smartphones that are exclusive to China. Building upon its experience in offering smartphones with e-ink display, the company has just announced the dual-screen Hisense A6L. On the front, there's a 6.5-inch LTPS display with an FHD+ resolution and a notch for the 20MP selfie camera. On the back, there's a 5.84 e-ink HD+ display. The rear cameras and LED flash are placed above it and include...

HiSense A6 with two displays is official

HiSense A6 which was showcased at the IFA 2018 in Berlin in September has received a reservation page on JD.com and is now listed on the HiSense website. This smartphone features two screens. On the front, there's a 6.01-inch FHD+ oncell AMOLED unit, while on the back, a 5.61-inch HD+ GFF e-ink display is provided. While the first display is used for watching videos, games and other content that requires full-colour...

After being teased at the Asia CES, HISense H20 has been officially presented at the at the Qingdao International Convention Center. The new smartphone is equipped with a brand new Hisense Harley intelligent assistant, featuring one-button AI and hundreds of filters. The model features a 20MP front camera with AI smart beauty features, providing over 100 kinds of filters. The two rear cameras 12MP+5MP are aided by...

HiSense and China Telecom launch the Hali - a smartphone with an 18:9 display

A few hours ago, during a press conference in Qingdao, HiSense has presented the Hali - its first smartphone with an 18:9 display. The product is created jointly with China Telecom and it is expected that it is the first of a series of future smartphones from the two companies. The model packs a 5.99-inch IPS display with an HD+ resolution (720 x 1440 pixels) covered with a 2.5D curved top glass layer. The...

HiSense Vidaa Mirror is actually with an 8.4" display as presented at the IFA in Berlin

Probably the most interesting mobile device of HiSense at the IFA 2015 in Berlin is the Magic Mirror (F6281) a.k.a. Vidaa Mirror tablet. It has been already announced earlier in August and back then it was announced that the tablet has a 7-inch IPS display with a 431ppi pixel density. However, the model is already listed on HiSense's official website and is presented at the IFA with an 8.4-inch display. Actually...

HiSense is better known as a big TV manufacturer, but it is already well established in the smartphone market. At the IFA 2015 in Berlin the company exhibits two models. The first is the HiSense Pure Shot L671, which arrives with a 5-inch IPS display with an FHD resolution, while the second - HiSense Pure Shot Plus L695 - has a larger 5.5-inch IPS display with the same 1080p resolution. The two smartphones share...

Hisense unveiled an almost frameless tablet with a QHD display

Hisense presented an interesting tablet called Vidaa Mirror, which has a display taking up 90% of its total surface area. The 7-inch slate has very thin bezels and look more like a big smartphone. The screen resolution is 2560 x 1600 pixels and the pixel density is 431ppi. The slate is based on a RockChip RK3288 chipset with a 1.8GHz quad-core Cortex-A17 CPU and a Mali-T764 GPU. There are also 2GB of RAM and 16GB of...

Mira 6 is HiSense's first Windows Phone 8.1 smartphone. It sports a pretty good set of mid-level characteristics and though pricing is not announced, yet, it is expected that the phone will be quite affordable. It will be available for the Chinese market only. The HiSense Mira 6 has a 5-inch HD display, a Qualcomm Snapdragon 8612 quad-core CPU clocked at 1.2GHz, 1GB of RAM, and 4GB of storage (expandable). The...

HiSense Sero 8 is now available for purchase for only $129

HiSense is a Chinese manufacturer of tablets aimed mainly at the US market. Its latest device is the HiSense Sero 8 tablet, which sports a pretty decent set of specifications for the affordable price of $129. Announced back in April, it is now available for purchasing through Walmart. Logically, the tablet has an 8-inch IPS display and its resolution is 1280 x 800 pixels. It features a Rockchip RK3188T quad-core CPU...