Max Weinbach shared in two separate posts on Twitter the Sony Xperia 1 II and Xperia 10 II specifications and images. So here they are without further ado.

According to the leaked specifications, the Xperia 1 II is 166 mm high, 72 mm wide and 7.9 mm thin. It weighs 181 g. It is built around a 6.5-inch 4K OLED display with HDR support and Motion Blur Reduction. The poster specifies that this blur reduction is a "90Hz equivalent benefit" whatever that means. The smartphone is based on a Snapdragon 865 chipset and supports 5G. It arrives with 8GB of RAM and 256GB of storage.

When we go through the Xperia 10 II specifications, it seems it is like the compact version of the previous model. It weighs only 151 grams and is 69 mm wide. The handset is also 157 mm tall and 8.2 mm thin. It has a 6-inch FHD+ OLED display with video image optimization and is based on a Snapdragon 665 chipset with 4G 3CA support. There are 4GB of RAM and 128GB of storage onboard. A 3600 mAh battery keeps the lights on. A 3.5 mm jack is provided on this model as well along with LDAC, DSEE HX, and Hi-Res audio support. The front camera is an 8MP unit and on the back, there's a 12MP main shooter with PDAF and 26 mm focal length equivalent. It is adjoined by an 8MP telephoto snapper with a 52 mm focal length equivalent and an 8MP ultra-wide unit with a 16 mm focal length equivalent. The handset has an IP65/IP68 rating for water and dust resistance and is available in black and white. 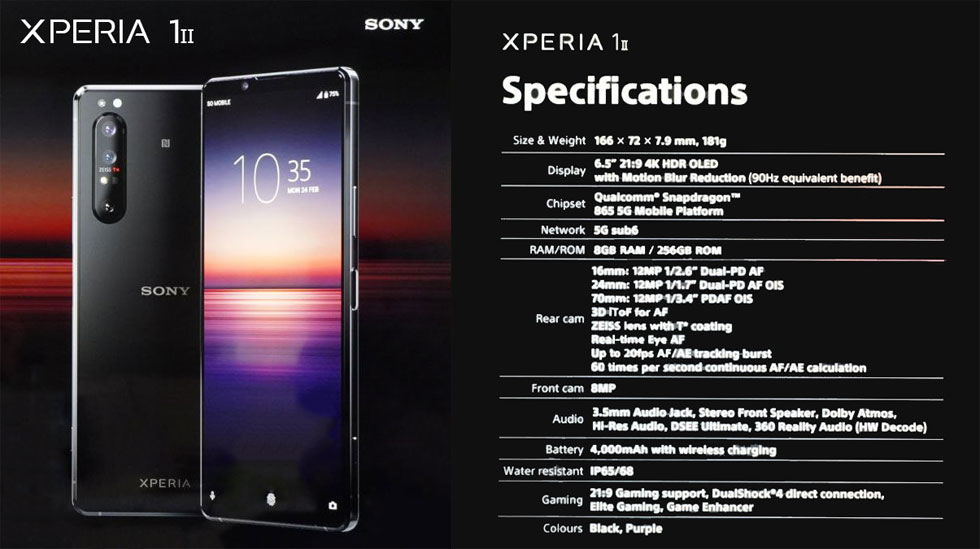 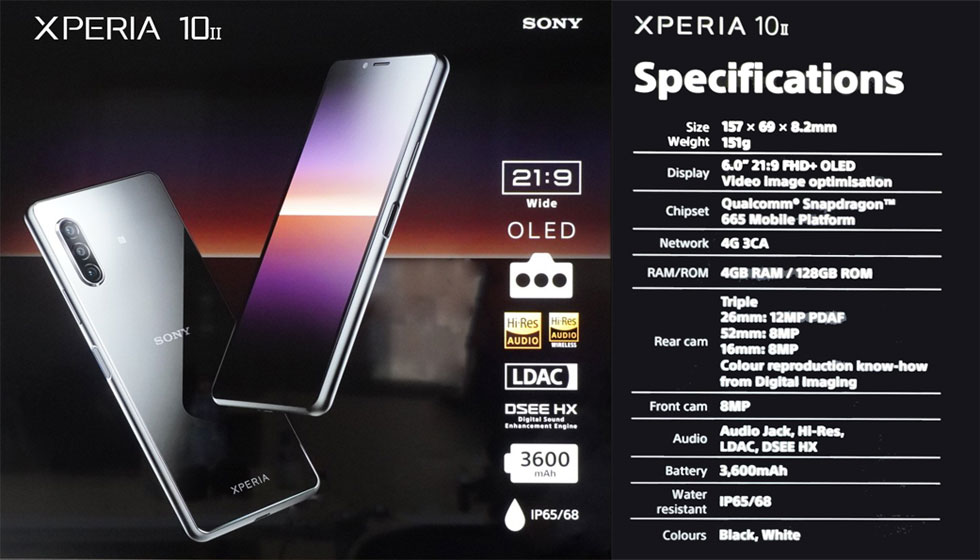 The leaker with тхе IceUniverse pseudonym has shared on Weibo the main specs of the upcoming Xperia XZ4. Sony's future flagship is expected to be unveiled at the MWC 2019 in Barcelona at the end of February next year. According to the leak, the smartphone will pack an LG display with a 6.55-inch FHD+ resolution and 21:9 aspect ratio. It will be powered by a 3900 mAh battery and, logically, will be based on a...