According to the Strategy Abalytics latest research, Samsung has caught up with Xiaomi in India's smartphone market during Q2 of 2019. Xiaomi remains first with 10.2 million smartphones shipped in India in the April-June period for a 28.7% market share. Samsung remains second but with increased units shipped and increased market share - 9.4 million units and 26.3%, respectively. Xiaomi's number one spot is due mainly to the attractive prices and strong retail presence in the country. Still, the brand's growth remained flat, while Samsung added 3.1% to its market share compared to Q2 of 2018. That's due mainly to the strong performance of its A and M series with the refreshed model lineup, good pricing and Samsung's "India first" strategy. Woody Oh, Director at Strategy Analytics, said, "We expect Samsung to build further momentum and it is on track to reclaim the top position in the world's second-largest smartphone market during the second half of 2019."

Neil Mawston, Executive Director at Strategy Analytics, said, "India smartphone shipments grew 3 percent annually from 34.5 million in Q2 2018 to 35.6 million in Q2 2019. Growth was driven by generous discount schemes promoted by online retailers such as Flipkart. India today remains one of only a handful of growth markets among the global smartphone industry." 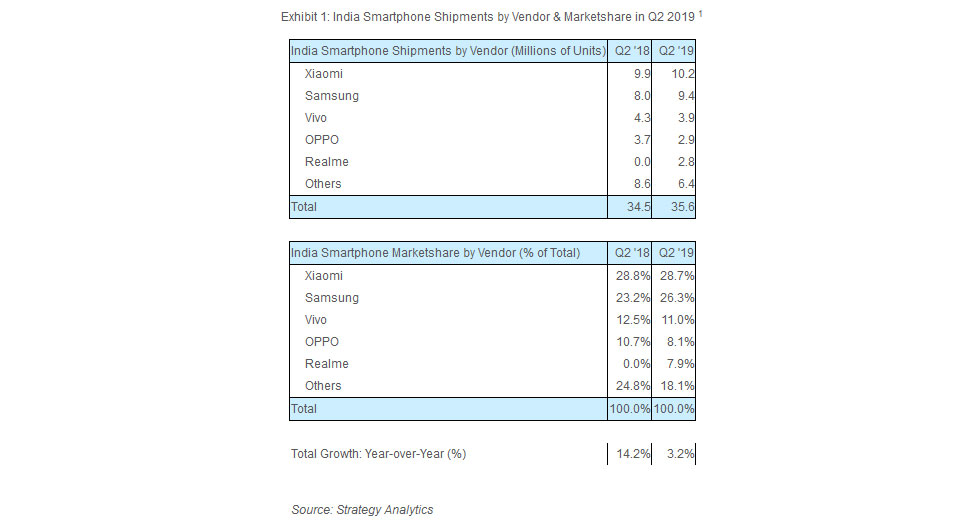 Vivo will enter the European market in 2020

A Vivo invitation for the MWC 2020 leaked on Weibo, unveiling that the company is all set to unveil its APEX 2020 concept smartphone. This will be the third concept smartphone from Vivo. The first was the APEX 2018 which had an OLED display with an in-display fingerprint sensor, Screen SoundCasting Technology that turns the whole display into a speaker - all firsts for the time being. The following year, the APEX...