OmniVision has announced its first 64MP image sensor for mobile devices - the OmniVision OV64C. It has a 1/7" optical format and a 0.8-micron pixel size. It is built on OmniVision's PureCel Plus stacked die technology and integrates an on-chip 4-cell color filter array and hardware re-mosaic, which provides high quality, 64MP Bayer output in real-time. In addition, the OV64C offers type-2, 2x2 microlens phase detection autofocus (ML-PDAF) for improved autofocus in low light conditions. The sensor can record 8K video at 30 fps, 4K video at 60 fps, 4K video at 30 fps with EIS, etc. Additionally, the OV64C supports 3-exposure, staggered HDR timing for up to 16MP video modes. Samples of the OV64C image sensor are available now. 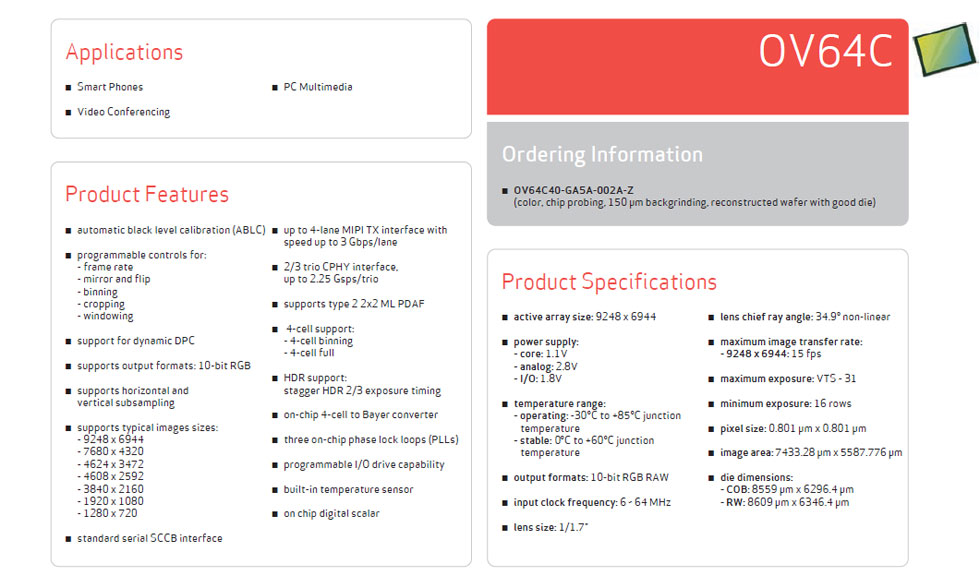 At CES 2020, OmniVision presented the 48MP OmniVision OV48C image sensor for mobile devices. This is the industry's first image sensor for high resolution mobile cameras with on-chip dual conversion gain HDR, which eliminates motion artefacts and produces an excellent signal-to-noise ratio (SNR). Based on OmniVision's PureCel Plus stacked die technology, this sensor has a 1/1.3" optical format and 1.2-micron pixels...

The OmniVIsion OV48B is the company's first 49MP image sensor for smartphones. It has a 1/2" optical format and a 0.8 µm pixel size. Built on OmniVision's PureCel Plus stacked die technology, it offers digital crop zoom and a CPHY interface. The sensor integrates an on-chip 4-cell colour filter array and hardware re-mosaic, which provides high quality, 48MP Bayer output in real time. In low light conditions, this...

The latest camera sensor for high-end mobile devices comes from OmniVision. The OV12890 is a 12-megapixel PureCel®Plus-S image sensor with a large, 1.55 micron pixel and an optical size of 1/2.3". It provides seriously improved sensitivity to light and sensitivity and signal-to-noise (SNR) ratio with faster 12-bit readout architecture. It produces images with a resolution of 4096 x 3072 (active pixels) and supports...

OmniVision unveiled the 13.2-megapixel OV13870 sensor for mobile devices, which is the industry's first with a big pixel size, which is capable of recording 1080p videos at 240 fps. Obviously, it is intended for mid-range to high-end devices as it supports phase detection AH, dual-camera setups, and has an integrated 12-bit analog to digital converter (ADC), which provides better low light signal to noise ratio...

OmniVision has announced its newest sensor for notebooks and mobile devices. The OV2744 is a 1/6-inch, 1.4-micron PureCel image sensor, which is equipped with the second generation of OmniVision's RGB-IR tech. On one hand, it enables the sensor to provide high quality RGB imaging, and on the other - to support various IR applications, including biometric apps such as facial recognition. This combination of the two...

Usually, with the approach of the year's end manufacturers announce new hardware achievements that will be found in mobile devices in the years to follow. After Huawei, Qualcomm and Samsung announced their high-end chipsets, it was expected that image sensor manufacturers would take their turn. OmniVision is the first to announce its latest high-end image sensor. The OV16860 is a 16-megapixel PureCel Plus-S image...

Obviously today is a camera sensors' day as after Sony announced its newest 21-megapixel sensor, OmniVision has announced a new sensor of its own. This is the 23.8-megapixel OV23850 PureCel-S sensor, which similar to the Sony Exmor RS IMX230 uses phase detection AF. It also provides advanced HDR imaging, which, however, works only for video capturing (4k at 30 fps) and not for still images. The 23.8-megapixel sensor...