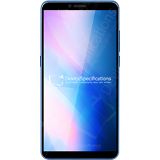 Vargo is a Chinese manufacturer of TVs and smartphones, which also has its own operating system that powers the devices it makes. It has entered the smartphone market in 2014 and since then has released only three models. A distinctive feature of all three is the high-level of data security. The devices employ a three-level encryption - on the mobile itself, signal transmission, and server side encryption. They also...