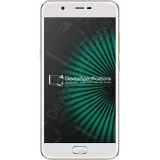 imoo has launched its second smartphone - the C1

imoo is the fourth smartphone brand of BBK Electronics - the owner of OnePlus, Oppo, and Vivo. It has just launched its second smartphone - the imoo C1. The first one was called Get and was announced in the summer of 2016. It was focused on pupils and students, and marketed as an educational tool. The C1 does pack a plethora of educational features, too (resources, learning applications, time control learning...