It's been quite some time since Blackview released a smartphone from its BL series and quite some time it released a serious smartphone for that matter. To compensate for that, the brand releases two models - the Blackview BL8800 5G and the Blackview BVL8800 Pro 5G. The models are very much alike with the Pro version boasting a better set of cameras. Both models are based on a MediaTek Dimensity 700 chipset with 5G connectivity and a 2.2GHz octa-core CPU paired with 8GB of LPDDR4X RAM and 128GB of built-in UFS 2.1 storage that can be expanded. The chipset is cooled down by a 3D copper VC liquid cooling system with a 9400 sq.mm. of graphene layer and 2300 sq.m.. VC area. Each model has a 6.58-inch IPS display with an FHD+ resolution and is powered by an 8380 mAh battery with 33W charging support. Both models run on Android 11 with Blackview's Doke OS 3.0 on top. Finally, these are rugged smartphones with IP68, IP69K, and MIL-STD-810H certification for resistance to extreme environmental conditions.

The Blackview BL8800 5G has a 16MP Samsung 3P9 selfie camera and a quad-camera module on its back. The latter includes a 50MP Samsung JN1 main shooter capable of recording 2K videos at 30 fps. It is adjoined by a 20MP Sony IMX350 Night Vision camera with dual IR lights, an 8MP ultra-wide camera with a 117-degree FoV, and a 2MP depth sensor. Blackview also touts underwater shooting capabilities as the device is IP68 rated. In general, this model is very similar to the Blackview BV8800 which has a 90Hz display and a Helio G95 chipset comprising the main differences with the BL version. The Blackview BVL8800 Pro 5G has the same front camera, main rear camera, and depth sensor. The Night Vision camera is replaced by a thermal FLIR Lepton camera aided by a secondary 5MP shooter. 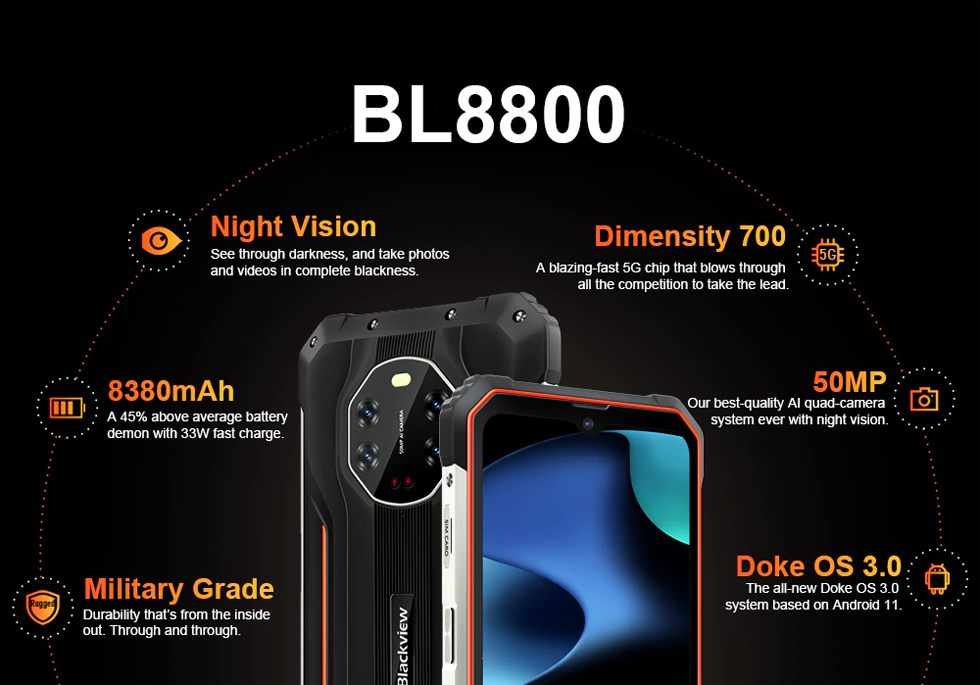 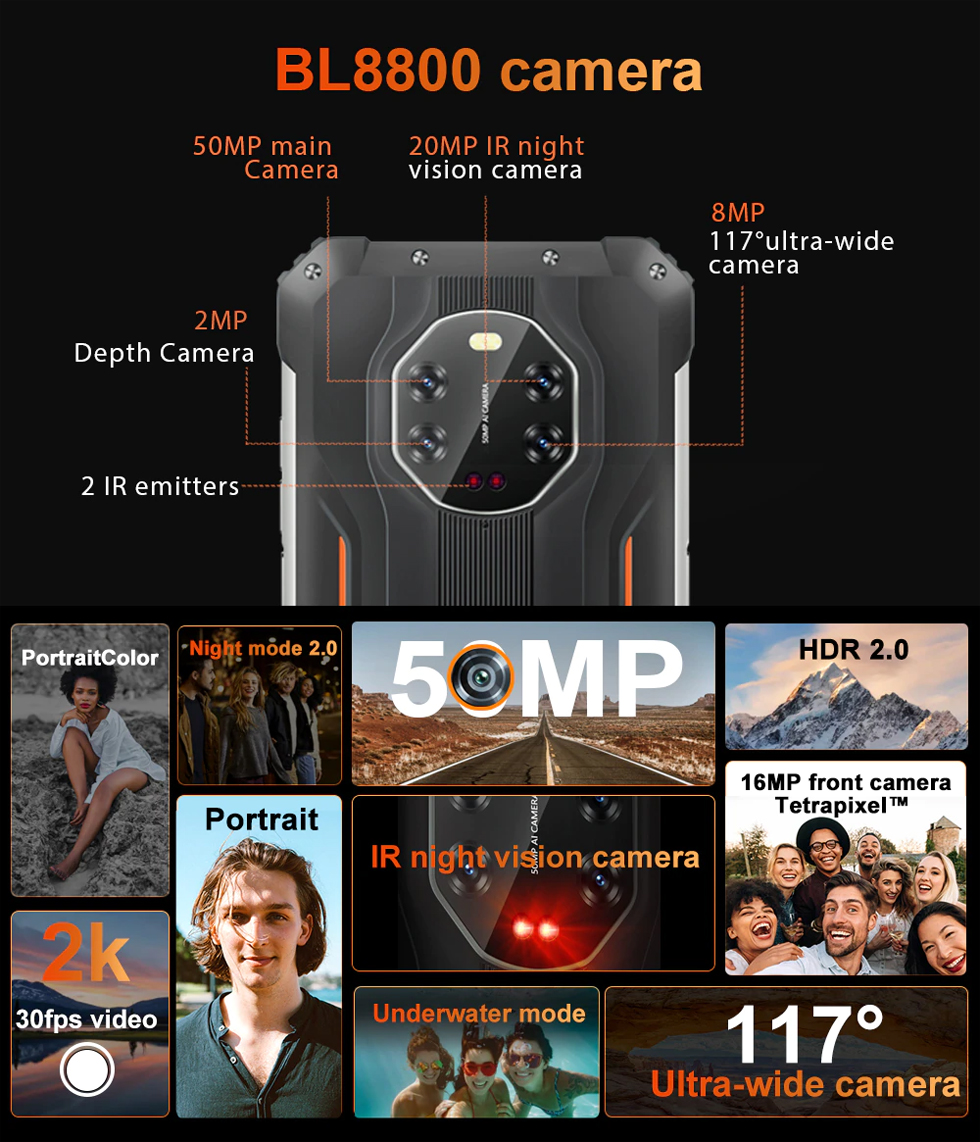 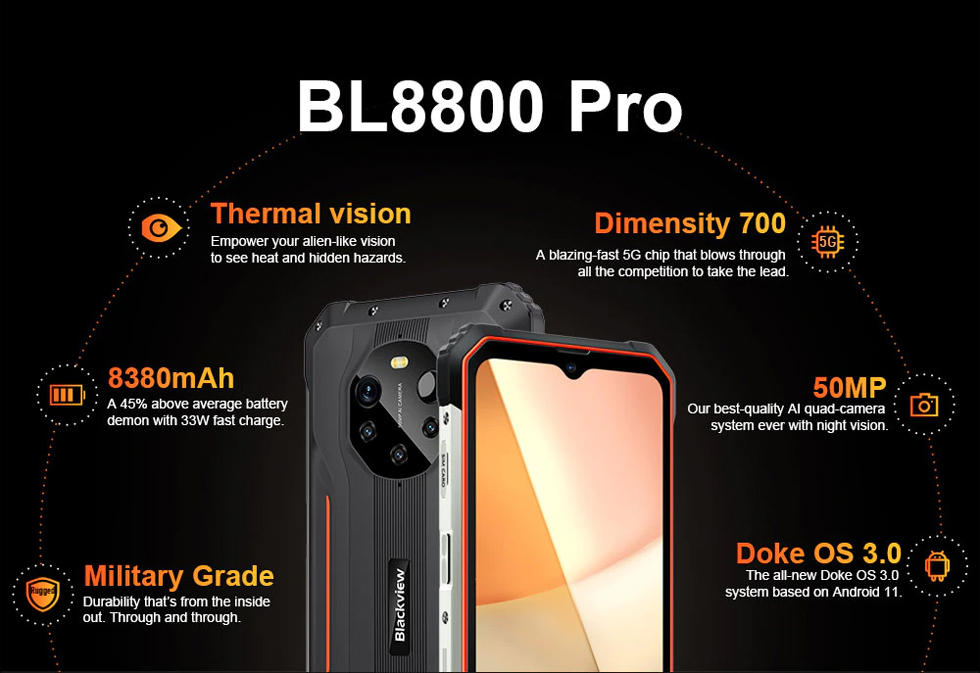 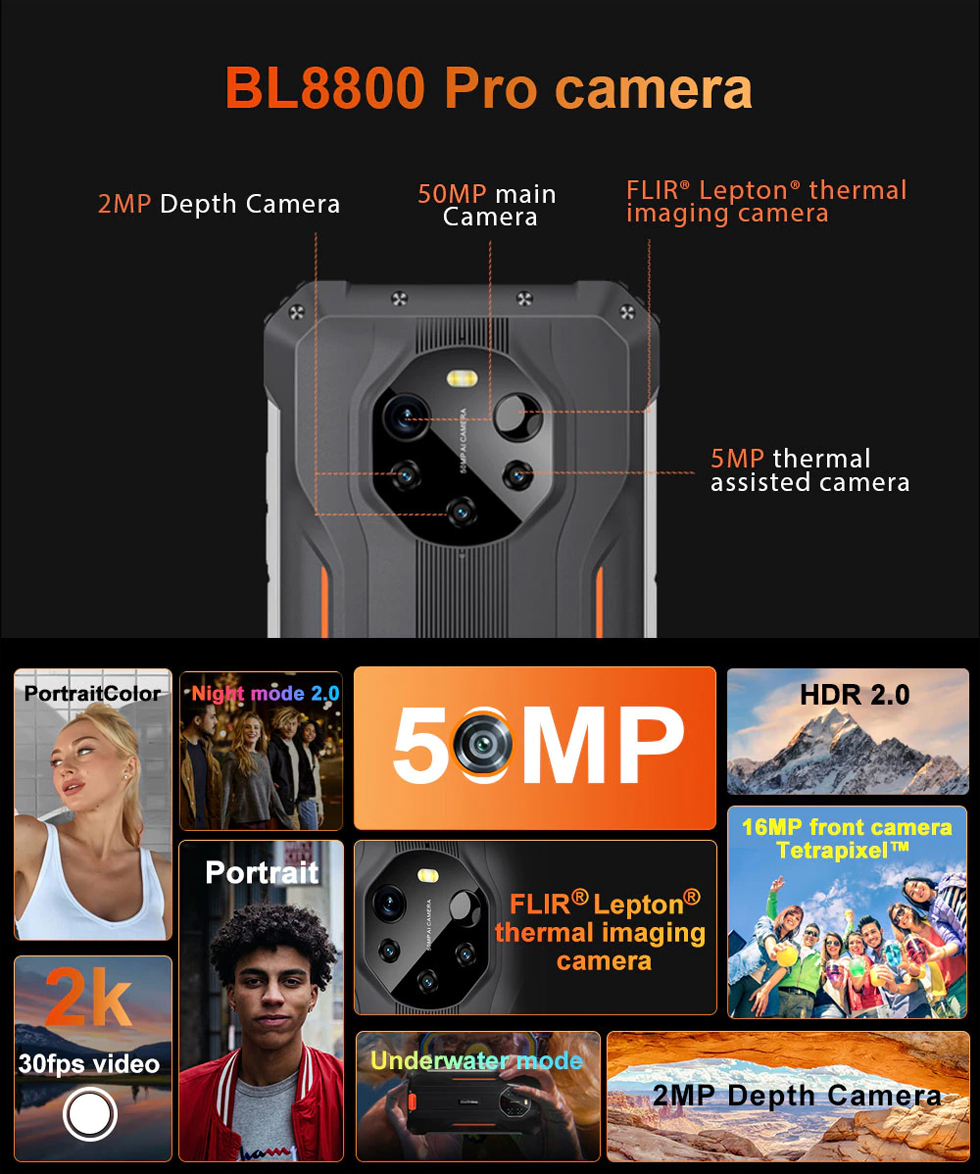 The Blackview BV8800 has made its worldwide debut sporting a 6.58-inch in-cell IPS display with an FHD+ resolution and a 90Hz refresh rate. It has a brightness of 480 nits. The device is based on a MediaTek Helio G96 chipset with 8GB of LPDDR4X RAM and 128GB of UFS 2.1 storage. The chipset's work under heavy loads is added by a liquid cooling system adopting a 3D copper pipe. An 8380 mAh battery with 33W fast...