The Samsung Galaxy Tab A8 has been announced with a 10.5-inch IPS display with a resolution of 1920 x 1200 pixels. The tablet is powered by a 7040 mAh battery with 15W adaptive fast charging support but there's a 7.5W charger in the box. There's an 8MP rear shooter with autofocus and a 5MP selfie snapper. Four stereo speakers with Dolby Atmos certification are also on board along with a 3.5 mm jack. The model has a USB Type-C port, gyroscope, compass, light sensor, Hall sensor, and accelerometer. Processing power is based on a Unisoc Tiger 618 chipset with an octa-core 2.0GHz CPU. It is paired with 3GB or 4GB of RAM and 32GB, 64GB, or 128GB of storage. The latter can be expanded. There's an LTE version of the model with a single SIM card - the Samsung Galaxy Tab A8 LTE, and a Wi-Fi-only version - Samsung Galaxy Tab A8 Wi-Fi. Each runs on Android 11 with OneUI 3.1.1 on top including Samsung TV Plus and various features. 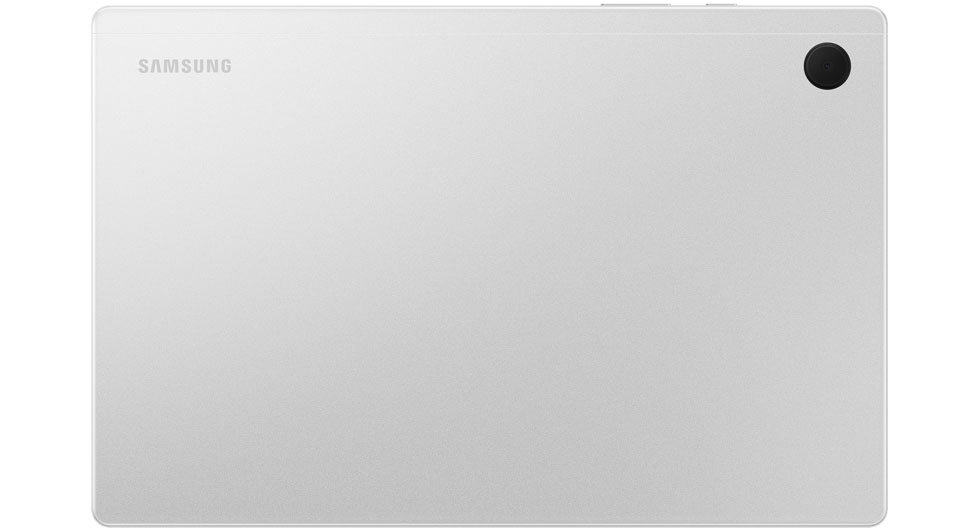 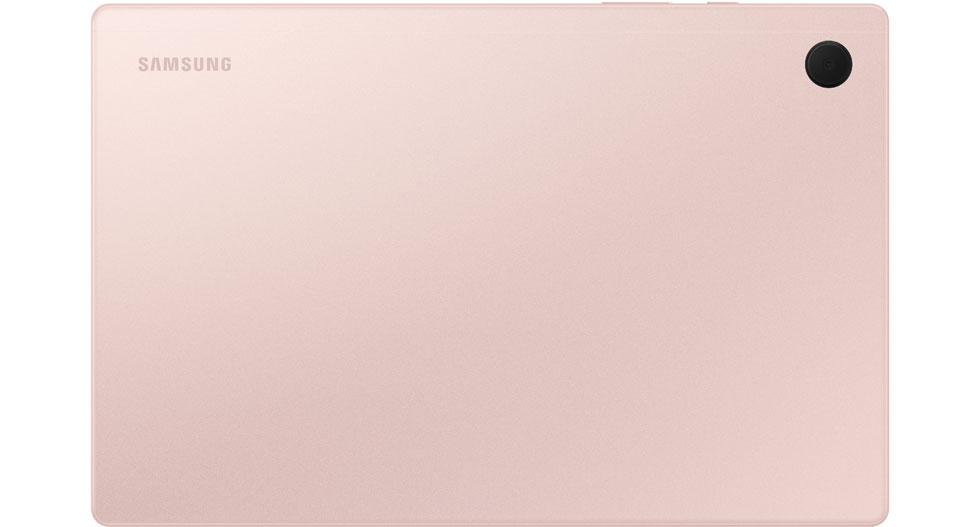 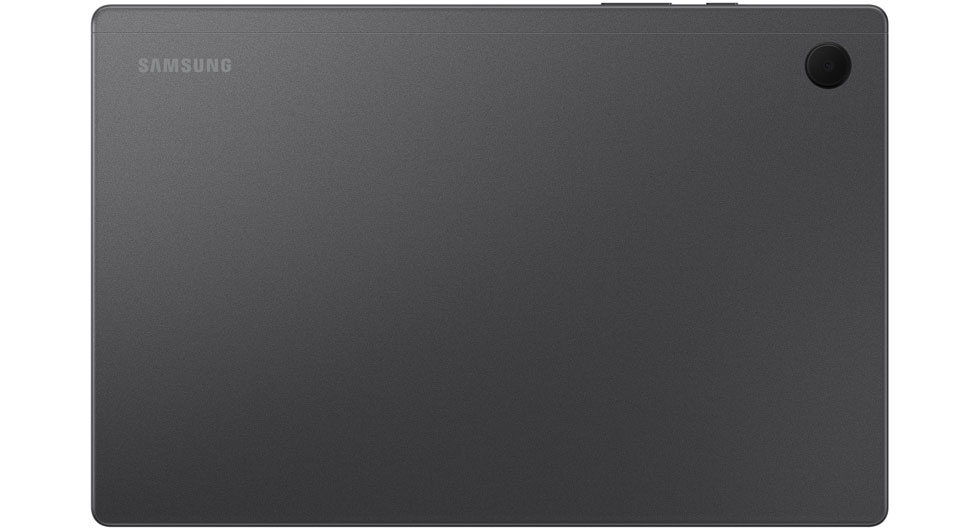 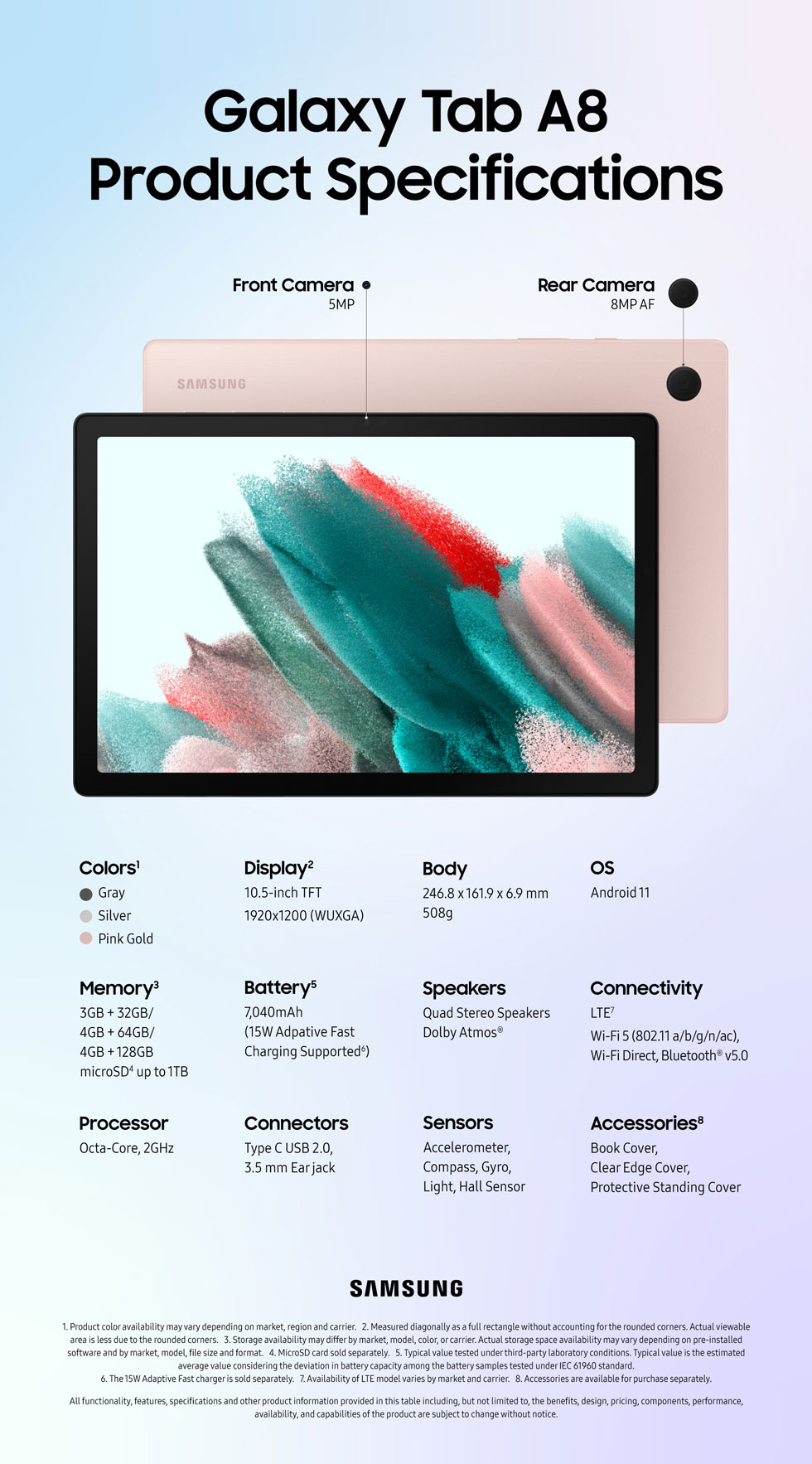 Samsung teases the Galaxy S22 series, will introduce it in February

Samsung Electronics has launched an official teaser for the upcoming Galaxy S22 series confirming the Unpacked event will be held next month. The teaser was accompanied by an official address by Dr. TM Roh, President and Head of MX Business at Samsung Electronics. Here are some highlights of what he said. "At Unpacked in February 2022, we'll introduce you to the most noteworthy S series device we've ever created."...

Samsung announced its new premium mobile processor, the Exynos 2200. This is a freshly designed mobile processor with a powerful AMD RDNA 2 architecture-based Samsung Xclipse graphics processing unit (GPU). With the most cutting-edge Arm-based CPU cores available in the market today and an upgraded neural processing unit (NPU), the Exynos 2200 will enable the ultimate mobile phone gaming experience, as well as...

Samsung India introduces the Galaxy Tab 8 for the local market

Samsung India today announced the launch of the Galaxy Tab A8 with an all-new design, impressive large screen, bigger battery, and ultimate audio experience. Galaxy Tab A8 is the most powerful Tab A Series device for learning, entertaining, connecting, and more. The Galaxy Tab A8 comes with an expanded 10.5-inch screen with a slim bezel and a 16:10 common aspect ratio. The result is an 80 percent screen-to-body...

Last year Samsung brought the Galaxy flagship experience to even more fans with a new addition to the S series – the Galaxy S20 Fan Edition. Designed with fan feedback and equipped with the premium features that matter most to Galaxy fans, the S20 FE became an instant hit. Now Samsung is once again welcoming new users to the S series with the powerful new Samsung Galaxy S21 FE. Packed with select fan-favorite...

The Samsung Galaxy S21 FE 5G has appeared on the Samsung AE support page unveiling its colorways and design. The smartphone with model code name SM-G990E/DS will be available in White, Lavender, Cream, and Black colors. The device is expected to launch in January in India and its price will be around EUR 649 and EUR 699 for the 128GB and 256GB versions, respectively.

The Elec reports that Samsung Display ordered equipment for its new OLED production line called A4E. This line will use Gen 6 (1500 x 1850 mm) substrates to manufacture small OLED panels for smartphones. The A4E line will be assembled at Samsung Display's plant at Asan, South Korea. The expected monthly capacity from the line is 30,000 substrates. The first equipment order is for 15,000 substrates and costs 1...

Samsung will hold another Galaxy Unpacked event on October 20

In a week's time, Samsung will hold another launch event dubbed Galaxy Unpacked Part 2. Next Wednesday, October 20, the event will be streamed on Samsung’s YouTube channel beginning at 10 a.m. ET.

The global smartphone display panel market posted a revenue of $21 billion in H1 2021, according to the Strategy Analytics Handset Component Technologies service report. According to Strategy Analytics research, the smartphone display panel market witnessed a double-digit revenue growth as Samsung Display led the market with 48% revenue share followed by BOE Technology with 15% and Tianma Microelectronics with 8% in...

The Samsung Galaxy M53 5G has been unveiled in India . The device will go on sale on October 2nd and there's a "launching soon" page on Amazon India. Available in black and blue colors, the plastic body is adorned with a 6.7-inch FHD+ Super AMOLED display with a 120Hz refresh rate. The device is based on a Snapdragon 778G chipset paired with 6GB/8GB of RAM and 128GB of storage. The battery has a capacity of 5000 mAh...

The Samsung HP1 is a new ISOCELL image sensor for mobile devices that combines ultra-high resolution with fast autofocus for high-end low-light performance. Based on Samsung's 0.64μm pixels, the ISOCELL HP1 is the world’s first 200-megapixel (MP) image sensor. It comes with Samsung's new 4×4 hybrid pixel-binning technology, which allows it to adjust its pixel layout to suit the shooting environment, and is powered...