The latest research from Counterpoint's Market Monitor Service shows that the global smartphone market is on the path of recovery after it was severely hit by the avalanche of lockdowns around the world. The main reason for this is the lifting or easing of lockdown conditions which enabled exports and imports not only of end-conusmer products but also of components. The main drivers are the Chinese and Indian markets, while the US and Europe marked a more modest bump.

Apple is fourth holding 11% of the global smartphone market. It has a 7% YoY decrease but an 11% QoQ increase in shipments. Oppo and Vivo are fifth and six, each with 8% market share. Realme registers the biggest QoQ growth - 132%. Its YoY growth is 45%. Still, the brand is quite small with 4% market share thanks to the India market. 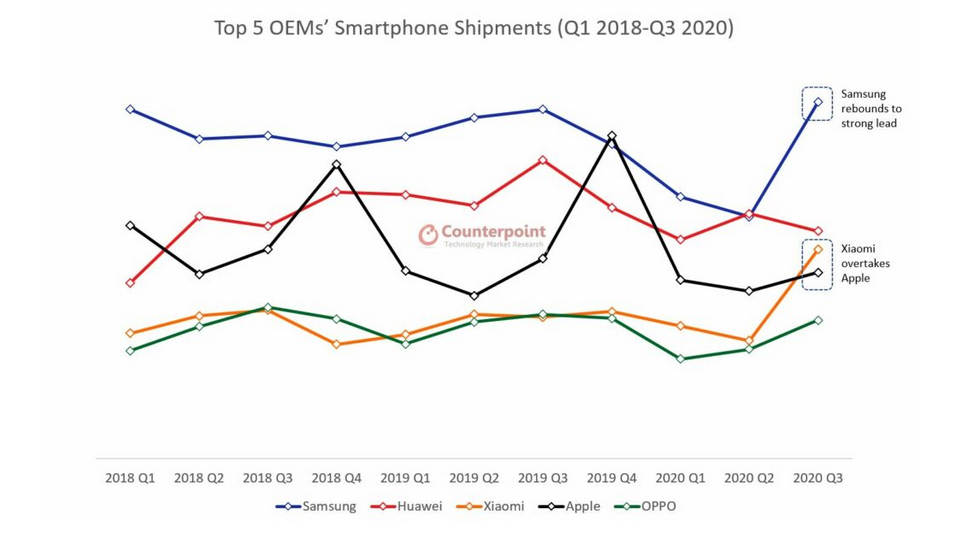 Vivo has launched a new budget smartphone from its Y series in India. The Vivo Y1s has a 6.22-inch IPS display with an HD+ resolution (720 x 1520) and is powered by a 4030 mAh battery that does not support fast charging. Under the hood, a MediaTek Helio P35 (MT6765) ticks paired to 2GB of RAM and 32Gb of storage. The camera department is really basic with a single 13MP rear camera and a 5MP front-facing snapper. A...

During its innovation day event, Oppo has unveiled an impressive concept smartphone dubbed Oppo X 20201. The device test a new display concept that uses a stepless flexible OLED display that can be scrolled. Its minimum diagonal size is 6.7 inches and the maximum diagonal size is 7.4 inches. At the core of this solution stands Oppo's self-developed roll motor powertrain paired with a dual matrix embedded clutch...

Xiaomi has just unveiled the Redmi K30 S. In its essence, this is the Xiaomi Mi 10T but with slightly modified specs to suit the Chinese market. The Redmi K30 S has a 6.67-inch IPS TruColor screen with an FHD+ resolution. The screen is flat and offers a 144Hz refresh rate, 240Hz touch sampling rate. The display supports Adaptive-Sync technology and HDR10+. Processing power is based on a Snapdraon 865 chipset with an...

Vivo is quite active this week. Yesterday, it announced its entrance into the European and UK markets, and today, it launched two new smartphones for the Chinese one. These are the iQOO U1x which we already informed you about and the Vivo Y3s. The Y3s is based on a MediaTek Helio P35 (MT6765) chipset paired to 4GB of RAM and 128GB of expandable storage. The smartphone is powered by a 5000 mAh battery with 10W...

iQOO U1x is the latest model from Vivo's iQOO series. The device is equipped with a 5000 mAh battery with 18W fast charging support. It is based on a Snapdragon 662 chipset and has a 6.51-inch display with an HD+ resolution. The camera department consists of a 13MP main shooter, a 2MP macro unit, and a 2MP depth-sensing lens. On the front, there's an 8MP shooter for selfies with an f/1.8 aperture. The iQOO U1x is...