Xiaomi India presented a trio of budget smartphones from the Redmi 11 Prime series running on MIUI 13 based on Android 12. Let's begin with the Redmi 11 Prime 5G. It is based on a Dimensity 700 chipset paired with 4GB/6GB of RAM and 64GB/128GB of storage. Power is supplied by a 5000 mAh battery with 18W fast charging support and a 22.5W charger in the box. On the front, there's a 6.58-inch IPS display with an FHD+ resolution, a 90Hz refresh rate, and a waterdrop notch for the 5MP selfie snapper with an f/2.2 aperture. The front is protected by Corning Gorilla Glass. On the back, there's a dual camera combo with a 50MP main shooter with an f/1.8 aperture and a 2MP depth-sensing unit. The Redmi 11 Prime 5G is fitted with a side-mounted fingerprint sensor, a triple-slot SIM tray, a 3.5 mm jack, and a USB Type-C sensor. It will be available in silver, black, and green colors priced at INR 12999 for the 4GB+64GB version and INR 14999 for the 6GB+128GB variant. The launch date is set for September 9th. 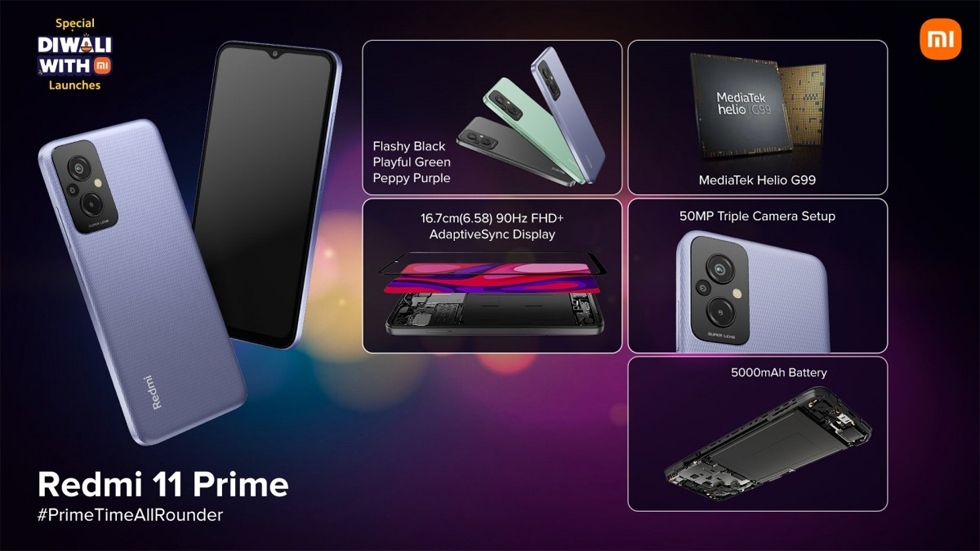 The next one is the Redmi 11 Prime 4G. It has the same 6.58-inch display as its 5G sibling but the waterdrop notch houses an 8MP selfie camera. The rear cameras on the back are also the same and there's a third unit added - a 2MP macro lens. The battery is also the same but the chipset is different - there's a Helio G99 SoC under the hood paired with 4GB/6GB of RAM and 64GB/128GB of storage. The smartphone has a single 1.5W speaker. The Redmi 11 Prime 4G is available in green, purple, and black colors and is priced at INR 12999 for the 4GB+64GB variant and INR 14999 for the 6GB+128GB version. There's no exact launch date.

Finally, there's a very cheap and simple model - the Redmi A1. It runs on clean Android 12 and is based on a Helio A22 chipset with 2GB of RAM and 3GB of built-in memory that can be expanded. The 5000 mAh battery is retained but there's a Micro-USB connector for up to 10W charging. The camera department comprises a 5MP selfie snapper, an 8MP main rear shooter, and a 2MP depth sensor. The 6.52-inch IPS display on the front offers an HD+ resolution. This model will go on sale on September 9th available in black, blue, and green colors. Its price is set at INR 6499.
Xiaomi Redmi Note 11R is presented in China

The Xiaomi Redmi Note 11R is the 18th model from the Redmi Note 11 lineup. It is a re-badged POCO M4 5G with an 8GB RAM option and a single storage option - 128GB. The smartphone runs on MIUI 13 based on Android 12 and is based on a Dimanesity 700 chipset with dual 5G support. There's a dedicated slot for a microSD card. On the front, there's a 6.58-inch IPS display with an FHD+ resolution and a 90Hz refresh rate...

Xiaomi Civi 2 has been just unveiled in China. This elegant smartphone is very light and thin. It is only 7.23 mm thick and weighs 171.8 grams. The golden 58° curve on the front and back offers an improved handheld experience by providing a firm grip. The front is adorned with a 6.55-inch AMOLED display with an FHD+ resolution, a 120Hz refresh rate, a 240Hz touch sampling rate. The display supports true 10-bit gray...

The Xiaomi MIX Fold 2 debuted today featuring premium specifications in every aspect of a smartphone. First, it boasts a new, in-house developed micro waterdrop hinge that employs various cutting-edge technologies to deliver a powerful yet enjoyable experience. The new design enabled Xiaomi to create an extremely thin foldable smartphone. When it's folded, it is only 11.2 mm thick and when unfolded - it is a mere...