The Realme Q5i has just been launched in China with prices starting at CNY 1199 for the 4GB+128GB version and CNY 1299 for the 6GB+128GB version. The built-in storage is UFS 2.2 type and can be expanded. There's also a RAM expansion technology on board for up to 5GB of additional RAM. The smartphone is based on a MediaTek Dimnesity 810 chipset and packs a 5000 mAh battery supporting a 33W fast charge. The Realme Q5i is built around a 6.58-inch FHD+ display with a 90Hz refresh rate, 180Hz touch sampling rate, 600 nits of peak brightness. An 13MP main camera, dual speakers with Hi-Res audio certification, and a side-mounted fingerprint sensor complete the list of the most noteworthy specs and features of the model. The available colors include blue and black. The smartphone runs on Android 12 with realme UI 3.0 on top. 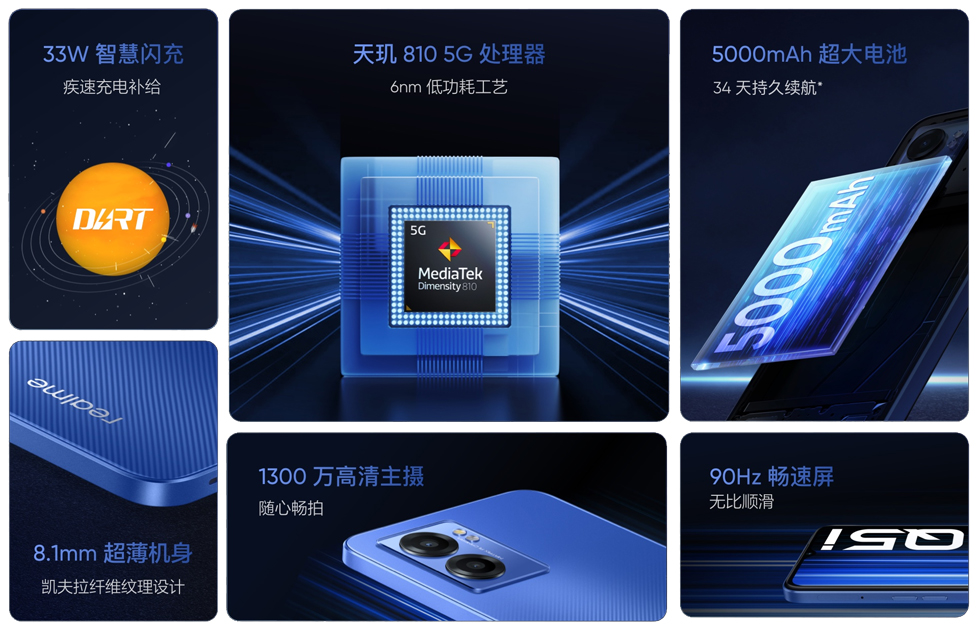 The Realme GT Neo3 Naruto Limited Edition was announced in China today. It is the same in terms of specifications as the Realme GT Neo3 with a 4500 mAh battery and 150W fast charging but has a specific Naruto-themed UI, body, and package design. The smartphone features a Dimensity 8100 chipset that offers a 3.2GHz CPU and a hexa-core Mali-G610 GPU. They are paired with MediaTek's APU 5.0 technology, GT Mode 3.0, AU...

Realme has also unveiled the Realme 9 5G Speed Edition which offers some powerful features. For starters, the device is fitted with a 6.6-inch display with an FHD+ resolution and a 144Hz refresh rate that can be adapted in 6 levels depending on the content you're viewing on the screen. Ultimately, this ensures optimal performance and increased power efficiency. The display is HDR10 certified, has 600 nits of...

The Realme 9 5G has just been announced featuring the industry's first ripple holographic design which uses six nano-layer films which spread the UV-nano gel imprinting evenly. The model is available in Stargaze White and Meteorite Black colors. The smartphone is built around a 6.5-inch IPS display with a FHD+ resolution and 90Hz refresh rate. Power is supplied by a 5000 mAh battery which is fitted in an 8.5 mm thin...

Realme has just unveiled the global versions of the Realme GT2 Pro and the Realme GT2. With minor differences in the network bands supported, these are generally the same smartphones unveiled earlier in January. Both smartphones have dual stereo speakers, 5G connectivity, in-display fingerprint sensors, NFC, run on Android 12 with realme UI 3.0 on top. The Realme GT2 Pro is built around a 6.7-inch Optic AMOLED...

Realme Narzo 50 is announced in India, goes on sale on March 3rd

Realme Narzo 50 has been announced in India and will go on sale in the local market on March 3rd via Amazon India. For comparison, the Narzo 50A and 50i are sold via Flipkart. The new smartphone has a 66.-inch IPS display with FHD+ resolution, 120Hz refresh rate with 6-level adaptation depending on the content displayed, 180Hz touch sampling rate. A MediaTek Helio G96 chipset ticks under the hood with a 2.05GHz...

The Realme 9 Pro and the Realme 9 Pro+ were unveiled today featuring upper-mid-range specs and Android 12 with realme UI 3.0 out of the box. The Realme 9 Pro+ is based on a MediaTek Dimensity 920 chipset paired with 6GB or 8GB of RAM. The built-in storage is in two variants - 128Gb and 256GB. The front is adorned with a 6.43-inch AMOLED display with an FHD+ resolution and 90Hz refresh rate. A punch hole in the...

The Realme GT 2 Pro receives a placeholder on Realme's website

Realme has created a placeholder for the upcoming Realme GT 2 Pro. The smartphone is due to be unveiled on December 20. The brand teased the device to arrive with three interesting features - using eco-friendly materials, improved communications, and improved photography - most probably an under-display front camera among all else. The device will be based on the Snapdragon 8 Gen 1 chipset. It is also rumored to...