Today Honor has also unveiled the Honor X30i. This beautiful smartphone is available in Titanium Empty Silver, Rose Gold, Magic Night Black, and Charm Sea Blue. The slim body (7.45 mm) houses a 4000 mAh battery with 22.5W fast charging support and is adorned with a 6.7-inch IPS display with a resolution of 1080 x 2388 pixels. The device is based on a MediaTek Dimensity 810 chipset with two Cortex-A76 cores ticking at 2.4GHz and six A55 cores clocked at 2GHz. The chipset is paired with 6GB/8GB of RAM and 128GB/256 of storage. The camera department features a 48MP primary shooter with an f/1.8 aperture, a 2MP macro lens with an f/2.4 aperture, and a 2MP depth sensor with an f/2.4 aperture. For selfies, Honor has provided an 8MP camera with an f/2.0 aperture. The Honor X30i runs on Android 11 with Magic UI 5.0 in top. It supports dual-band Wi-Fi 802.11ax, Bluetooth 5.1, etc. The model has a side-mounted fingerprint sensor embedded in the power button, a USB Type-C port, and a 3.5 mm jack. The The Honor X30i is priced as follows: 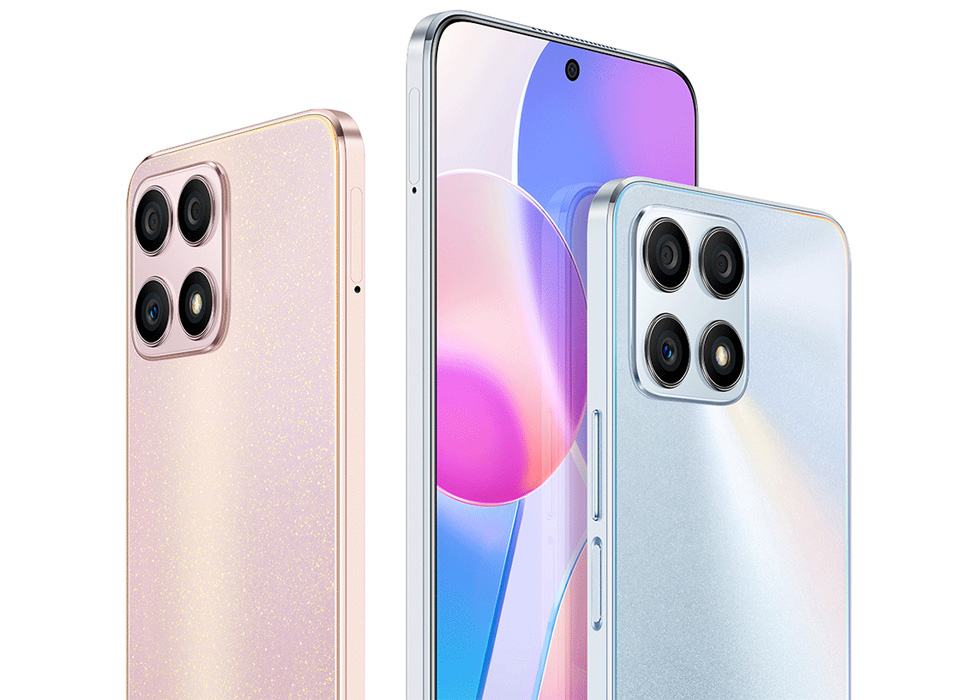 The Honor X30 Max 5G has just been unveiled featuring a 7.09" IPS display using an RGBW panel. The screen is TUV Rheinland certified for low blue light. Its peak brightness levels reach 780 nits and the unit is said to cover an unspecified percentage of the DCI-P3 color space. HDR10 certification is also mentioned. The smartphone is powered by a 5000 mAh battery with 22.5W fast charging support. Despite the beefy...

Honor today announced the global availability of the Honor 50 at launch events in multiple markets around the world. The device is equipped with GMS and features Qualcomm's Snapdragon 778G Mobile Platform. In addition, its stunning design and innovative vlogging capabilities raise the benchmark for smartphones in this category. With the rapid growth of short videos, young people have increasingly turned to vlogging...

On October 28, Honor will unveil the X30 series, which comprises the Honor X30 Max 5G and the Honor X30i 5G. The "Max" will feature a big display and beefy battery of yet undisclosed capacity and will be equipped with a 3.5 mm jack, a USB Type-C port, and a side-mounted fingerprint sensor, according to the official render. The Honor X30i 5G will have a thin and light body and three rear cameras.

The Honor Play5 Youth a.k.a. Vitality Edition has been launched in China. Available in Magic Night Black and Aurora Blue colors, the model packs a Dimensity 900 chipset ensuring 5G connectivity. It is paired with 8GB of RAM and 128GB/256GB of storage, while techs such as GPU Turbo X and Link Turbo X ensure stable connection and optimized performance during gaming. Indeed, gaming is also targeted via the big...

Honor has just unveiled the Magic3 series of flagship smartphones. The top-specced one is the Honor Magic3 Pro+. It is built around a 6.67-inch Flex OLED display with 89-degree curved edges, FHD+ resolution, 10-bit color bit depth, and a 120Hz refresh rate. An oval punch hole houses the 13MP front camera with a 100-free FoV and a 3D ToF sensor next to it. The rear camera department features five shooters. The main...

Honor today joined the Global CEO Tech Talk to share its vision for the future of smart and connected living in the age of 5G and AI. Benjamin Lim, former head of Reuters' Beijing office and chief correspondent for North Asia, served as moderator while George Zhao, CEO of HONOR Device Co., Ltd, Cristiano Amon, president and CEO of Qualcomm Incorporated, Sitao Xu, chief economist, and partner at Deloitte China and...

The Honor X20 SE is the latest offering by the brand for the Chinese market. This smartphone arrives in four colors with fancy names that are basically a white and violet gradient, pink gradient, jade green, and black. The body is plastic and is adorned with a 6.6-inch IPS display with an FHD+ resolution and a punch hole for the front camera. The selfie snapper uses a 16MP sensor and has an f/2.0 aperture. On the...