Vivo has given its audience a glimpse of the Vivo Apex 2020 which will be unveiled tomorrow. So far, it is known that its will have a 120Hz display and a periscope telephoto camera. The teaser shows a strongly 3D curved display and a 48MP main rear camera. The module above has a "5-7.5x optical zoom" sign. Moreover, it seems that this hand is a slider but that's not very clear from the teaser.

This will be the third concept smartphone from Vivo. The first was the APEX 2018 which had an OLED display with an in-display fingerprint sensor, Screen SoundCasting Technology that turns the whole display into a speaker - all firsts for the time being. The following year, the APEX 2019 demonstrated the company's capabilities in creating an all-glass smartphone with no holes and no frame. It also featured a full-screen fingerprint recognition. This means that you can unlock the device by touching anywhere on the screen. It also supports double finger entry at any position. The 2019 APEX also offered 5G support. Vivo is strictly keeping under wraps what it has been prepping for the APEX 2020. For sure, we will report back any information related to this concept smartphone which will definitely shape up a trend or two in smartphone development. 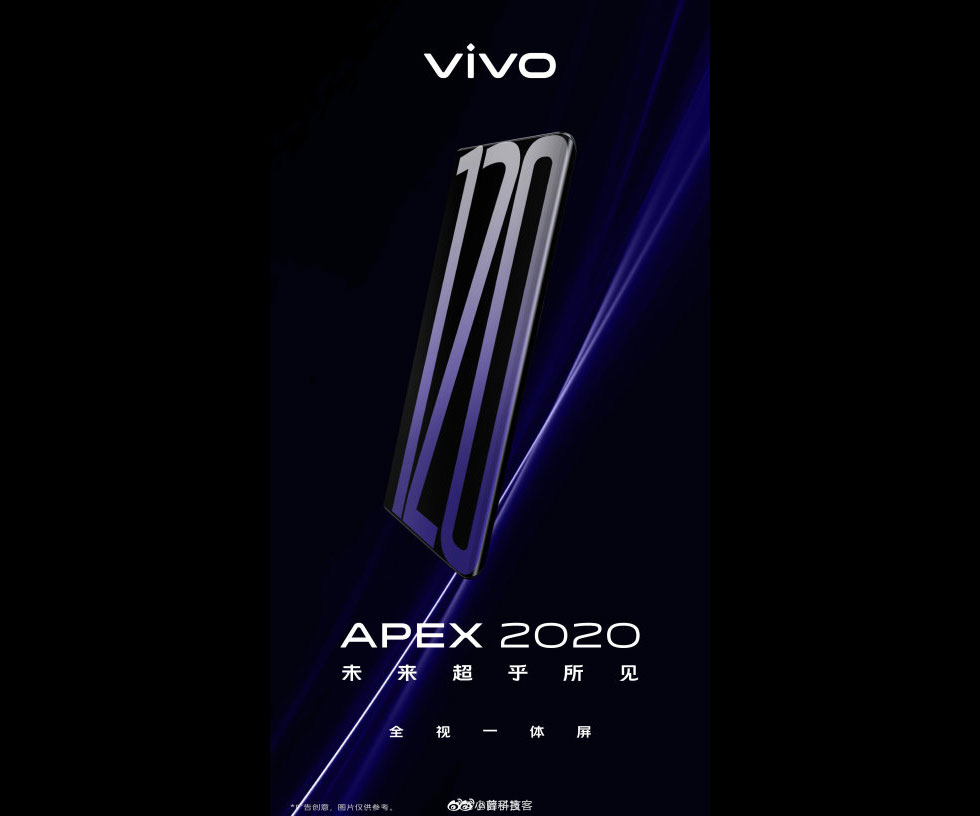 Vivo has unveiled the V21 series of smartphones today. It comprises three models - Vivo V21, Vivo V21 5G, and Vivo V21e. The first two models are identical. The only difference is that the 5G model offers 5G connectivity and faster 4G. Either way, the two smartphones are based on a Dimensity 800U chipset, have a 4000 mAh battery with 33W fast charging, and a 6.44-inch E3 AMOLED display with 90Hz refresh rate, FHD+...

Vivo has also unveiled the iQOO 7 Legend in India. It has the same display as the vanilla iQOO 7. In an addition to the in-display fingerprint sensor, there's a dual-control pressure sensing under the screen. Processing prowess is based on a Snapdragon 888 mobile platform with 8GB/12GB of LPDDDR5 RAM and 128GB/256GB of UFS 3.1 storage. This device has dual stereo speakers with a CS43131 independent Hi-Fi chip. A...

Vivo has unveiled the iQOO 7 in India. The smartphone features a 6.62-inch AMOLED display with an FHD+ resolution, 120Hz refresh rate, and 300Hz touch sampling rate. The peak brightness of the screen is 1300 nits. It is HDR10+ certified and has an Eye Care Display certification as well. Moreover, a dedicated display chip manages it. A Snapdragon 870 chipset ticks under the hood paired with 8GB/12GB of RAM and...

Vivo X60t goes official in China with a Dimensity 1100 chipset

Vivo has just unveiled the iQOO Neo 5. The smartphone has a gorgeous minimalist design with a flat front and rear surface. The glass and metal handset is available in Night Shadow Black, Cloud Shadow Blue, Pixel Orange colors. The front is adorned with a 6.62-inch AMOLED display with an FHD+ resolution, 120Hz refresh rate, 300Hz touch sampling rate, 105% NTSC coverage and HDR10+ certification. A small punch hole in...

This morning, Vivo teased the iQOO Neo 5 on iQOO's Weibo page, confirming that the device will arrive with a Snapdragon 870 mobile platform. Moreover, in terms of game visual effects, the device will use a hardware-level independent display chip to support "game frame insertion" and "stabilized frame rate" functions. According to the post, 1+1 is more than just 2, meaning this will offer better performance, lower...

Vivo will unveil the iQOO Neo 5 on March 16

Vivo has published on the official iQOO Weibo page that the new iQOO Neo 5 will be announced on March 16. This smartphone is expected to be based on a Qualcomm Snapdragon 870 chipset which houses a single 3.2GHz core, three 2.42GHz mid-cores, and four small 1.8GHz cores. An Adreno 650 handles the graphics. Its 3C certification (model code V2055A) confirmed 66W fast charging support. The battery will have a capacity...

Vivo has launched the Vivo S7t 5G in China. The smartphone is priced at CNY 2598 (USD 402) and has a single RAM+storage version - 8GB of LPDDR4X RAM and 128GB of UFS 2.1 storage. The only difference between this model and the original smartphone from the series - the Vivo S7 5G - is the chipset. While last year's model is based on a Snapdragon 765G, the Vivo S7t 5G is based on a Dimensity 820 SoC by MediaTek. All...