Blackview has released a couple of smartphones - one from the A series and another one from its much-praised BV series of rugged devices.

The Blackview A80 looks good but the hardware is dated. For starters, this smartphone is based on a MediaTek MT6737 chipset with 2GB of RAM and 16GB of storage. It is not a surprise that with that capacity of RAM and ROM the OS is Android 10 Go edition. The model has a 6.1-inch IPS display with an HD+ resolution (720 x 1520) and a 4200 mAh battery. The waterdrop notch on the front houses a 5MP selfie snapper, while the four rear cameras on the back are placed in a circular module and comprise a 13MP main unit with a Sony sensor, a 2MP lens, and two VGA snappers. Below them, there's a fingerprint sensor. The device is available in red, black, and blue colors and can be ordered from AliExpress for $100. 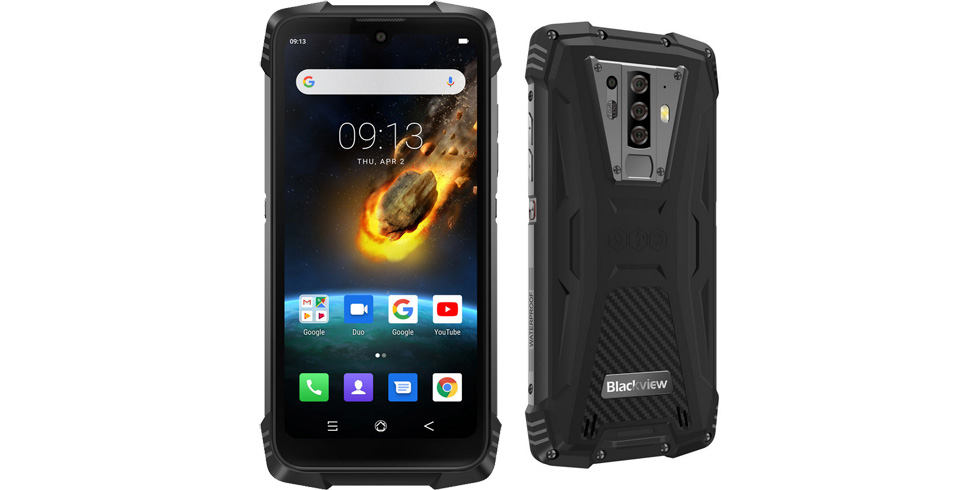 The Blackview BV6900 is a classic rugged smartphone but again with dated hardware. It is IP68, IP69K, and MIL-STD-810G certified and is based on a Helio P25 chipset. The latter is paired to 4GB of RAM and 64GB of storage. Power is supplied by a 5580 mAh battery that supports 18W fast charging and 10W wireless charging. The model features a 5.84-inch FHD+ display with Corning Gorilla Glass 5 for protection. The selfie camera is equipped with a 16MP Samsung sensor. The main shooter on the back has a 16MP Samsung sensor as well and is adjoined by three other cameras - an 8MP one and two VGA units. The smartphone has a USB Type-C port, supports NFC and runs on Android 9.0 Pie.
Blackview BV6300 Pro goes official with Helio P70 chipset, four rear cameras

Blackview BV9100 has joined the ranks of huge-battery smartphones. With its mammoth accumulator that has a capacity of 13000 mAh, it has only one direct rival in terms of a battery of that size - the Ulefone Power 5/5S. According to Balckview, the BV9100 has a standby time of 60 days. You can watch videos without interruption for 26 hours and play games for 24 hours without an additional charge. The 30W fast charger...

As planned, Blackview has announced the Blackview BV5900. Information on the manufacturer's website is scarce but some of the main specifications are unveiled. The BV5900 resembles a lot the Blackview BV6100. At least, both devices share the same 5580 mAh battery and the same MediaTek Helio A22 (MT6761) chipset with a 2GHz quad-core CPU. The device has a display with a waterdrop notch but no other details are...

Blackview has decided to update its very successful BV9600 Pro and BV9600 Plus with the Blackview BV9600. The three models are identical in terms of design, appearance and most of the specs, including the rugged qualities and certifications. The only differences are in the RAM, storage and chipset. The Blackview BV9600 is based on a Helio P70 chipset with 4GB of RAM and 64GB of storage, while the two older models...

Blackview has just announced its latest rugged smartphone - the BV9700 Pro. Early birds can get a 30% discount on the device when it goes on sale simply by signing up on the product's Indiegogo page. With a classic rugged apearance and a number of certifications for water and dust resistance, resistance to shock, drops, extremities (IP68, IP69K, MIL-STD-810G), Blackview BV9700 Pro also features air quality, air...

Blackview is expanding its most successful series of smartphones - the BV one, with the BV9600 Plus. This handset builds upon the achievements of the BV9500 Pro which it succeeds. First, the new model is adorned with a larger and better display - a 6.21-inch FHD+ AMOLED unit with narrow bezels and a Corning Gorilla Glass 5 for protection. Moreover, it is placed on top of a body that's only 9.8 mm thin - that's very...

The full set of features and specifications of Blackview BV9500 Plus are announced. The smartphone has a ruggedized body with a typical design for this class of devices. It has an IP68 and IP69K rating and covers the military MIL-STG-810G standard for resilience to drops, hits, etc. The smartphone packs a huge 10000 mAh battery from BAK and supports not only a 12V/2A fast charging but also QI wireless charging...

Blackview BV5800 Pro has just been announced sporting a 5580 mAh battery from BAK with wireless charging support and an IP68 certified ruggedized body that's resilient to drops, water and dust penetration. The device is equipped with a 5.5-inch HD+ IPS display protected by a Corning Gorilla Glass 3. It features two rear cameras, the main one being having a Sony IMX134 sensor interpolated to 13MP. There are a...