Xiaomi has unveiled its next-generation flagship devices - the Xiaomi 12 and Xiaomi 12 Pro. Both smartphones are based on Qualcomm's Snapdragon 8 Gen 1 chipset, with the vanilla version running on MIUI 12.5. The update to MIUI 13, which was also presented today, is scheduled for January. The Xiaomi 12 Pro arrives with MIUI 13 out-of-the-box.

The Xiaomi 12 is built around a 6.28-inch AMOLED display from Samsung with an FHD+ resolution and up to 120Hz refresh rate. There's an under-display fingerprint sensor and the whole front is protected by a Corning Gorilla Glass Victus. The rear shell is made of glass and sports a prominent camera island that houses a 50MP Sony IMX766 main sensor with a 1/1.56" optical format and a 2.0 μm pixel size. The camera is optically stabilized and is adjoined by a 5MP tele-macro unit with a 50 mm focal length equivalent plus a 13MP ultra-wide unit. Power is supplied by a 4500 mAh battery that supports 67W fast charging, 50W wireless charging, and 10W reverse wireless charging. All this is packed in a compact and elegant body that weighs only 180 grams. It is available in blue, black, and pink colors. The Xiaomi 12 is priced as follows: The Xiaomi 12 Pro features a 2K E5 AMOLED display with a 6.73-inch diagonal size, VRR from 1Hz to 120HZ. It uses a micro-Lens micro-prism technology and a second-generation LTPO backplane. The screen is Dolby Vision and HDR10+ certified. For an even more immersive experience, Xiaomi 12 Pro sports a four-unit stereo double-amplifier, adding two tweeters and two woofers. These are harman/kardon tuned and Dolby Atmos, Hi-Res certified. The Snapdragon 8 Gen 1 chipset is aided by a multi-layered cooling system. The battery has a 4600 mAh capacity but supports extremely fast charging - 120W, 50W wireless charging, and 10W reverse wireless charging.

The camera department comprises a 50MP Sony IMX707 main shooter with a 1/1.28" optical format and 1.22 μm pixels, OIS, and a 7-element lens. It supports CyberFocus - real time focus tracking for photos and videos. There's a 50MP telephoto unit with a 48 mm focal length equivalent, f/1.9 aperture, and 1.28μm pixels. Finally, there's a 50MP ultra-wide unit with a 14mm focal length equivalent. The punch hole in the display houses a 32MP selfie snapper. The Xiaomi 12 Pro is priced as follows: 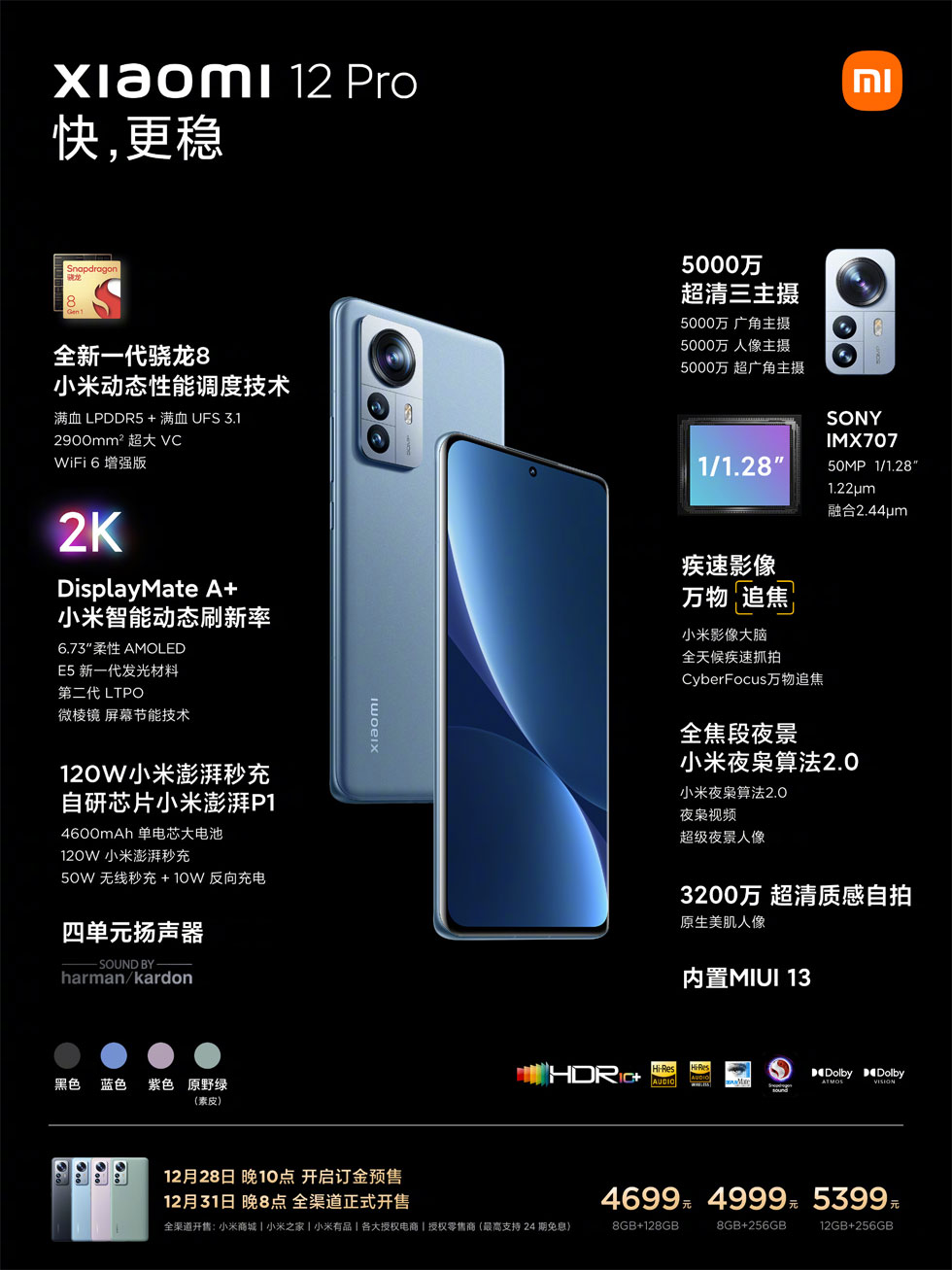