The Realme GT Neo3 Naruto Limited Edition was announced in China today. It is the same in terms of specifications as the Realme GT Neo3 with a 4500 mAh battery and 150W fast charging but has a specific Naruto-themed UI, body, and package design. The smartphone features a Dimensity 8100 chipset that offers a 3.2GHz CPU and a hexa-core Mali-G610 GPU. They are paired with MediaTek's APU 5.0 technology, GT Mode 3.0, AU Frame Stabilization Technology 2.0, and GPU Heterogeneous Rendering Technology for improved gaming. Additionally, the chipset is cooled down by a nine-layer heat dissipation system with an area of 39606 mm² including a 4129 mm² 3D-tempered VC. There are 6GB/8GB/12GB of LPDDR5 RAM on board and 128GB/256GB of UFS 3.1 storage.

The camera department features a 50MPO Sony IMX766 main shooter with an f/1.88 aperture, 6-element lens, 84.4° FoV. It is aided by OIS and adjoined by an 8MP ultra-wide camera with a 119.7° FoV, 5-element lens, an f/2.25 aperture. Finally, there's a 2MP macro lens. On the front, there's a 16MP Samsung S5K3P9 camera for selfies with an f/2.45 aperture. The front is adorned with a 6.57-inch AMOLED display with an FHD+ resolution, 120Hz refresh rate, 1000Hz touch sampling rate with smart sensing, and a dedicated display chip. The display uses a COP packaging technology and is protected by a Corning Gorilla Glass 5. It covers 100% of the DCI-P3 color space and support 10-bit color. The device is also fitted with dual stereo speakers with Dolby Atmos and Hi-Res Audio certification. The device supports Bluetooth 5.2, Wi-Fi 6, dual-SIM 5G connectivity, omni-sensing NFC. It runs on realme UI 3.0 based on Android 12. 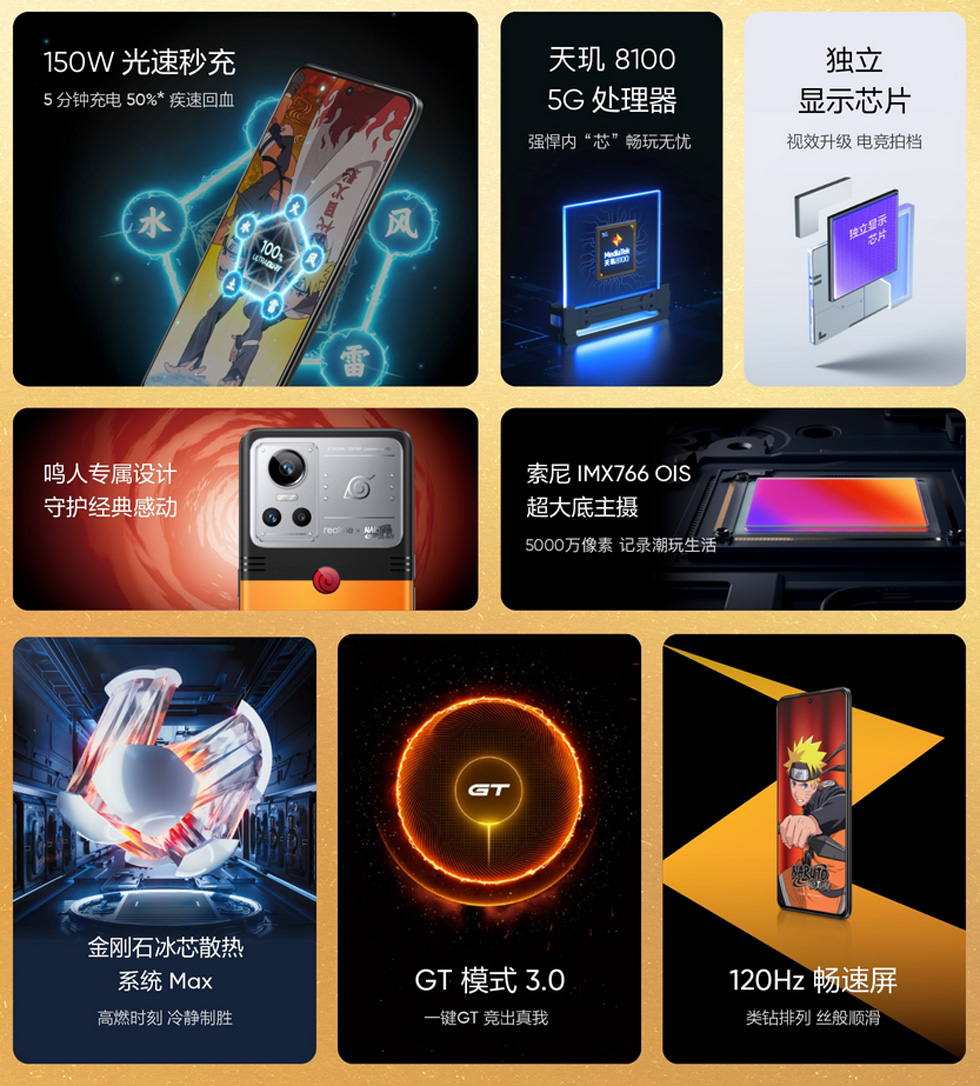 Realme Narzo 50i Prime has been unveiled today sporting entry-level specs that are very similar to those of the Realme C30. The new smartphone sports a 6.5-inch IPS display with an HD+ resolution. It is based on a Unisoc Tier T612 chipset with 3GB or 4GB of RAM and 32GB or 64GB of storage. Power is supplied by a 5000 mAh battery. The camera department is very simple - an 8MP rear shooter and a 5MP selfie snapper...

Realme India has introduced a very basic smartphone for the local market - the Realme C30. It is based on a Unisoc Tiger T612 chipset with a 2GHz octa-core CPU and a Mali-G57 GPU. There are 2Gb or 3GB of RAM and 32GB of storage that can be expanded. There's a dedicated slot for a microSD card. The camera department is more than modest - a single 8MP unit on the back with a 4-element lens and an f2.0 aperture plus a...

Realme Q5x is unveiled in China, will launch on June 23rd

Realme Q5x is a new 5G entry-level offering by Realme for the Chinese market. The device is priced at CNY 999 and is planned for a June 23rd launch. It is available in Ink Cloud Black and Star Blue colors. The only RAM+storage variant is 4GB and 64GB, respectively. It has a triple-slot tray for two Nano-SIM cards, each with 5G support, and a dedicated slot for a microSD card. Based on a MediaTek Dimensity 700...

Realme V20 5G has been unveiled in China. For the local market, the V series is the budget one, and indeed, in China, it costs CNY 999 which is roughly €142 or $148. The smartphone is quite ordinary - a 6.5-inch HD+ IPS display, a 5MP selfie camera, 13MP mai shooter, and a 5000 mAh battery with 10W charging. The most interesting thing about it is the MediaTek Dimensity chipset which ensures 5G connectivity. There...

The Realme GT Neo 3T was announced together with the global launch of the GT Neo3. The new model switches to a Snapdragon 870 chipset with 8GB of RAM and 128GB or 256GB of UFS storage. The chip is aided by a stainless steel vapor chamber cooling system. The model also ups the resolution of the main camera to 64MP, while the rest of the shooters remains the same - an 8MP ultra-wide unit with a 119-degree FoV, a 2MP...

The Realme Q5i has just been launched in China with prices starting at CNY 1199 for the 4GB+128GB version and CNY 1299 for the 6GB+128GB version. The built-in storage is UFS 2.2 type and can be expanded. There's also a RAM expansion technology on board for up to 5GB of additional RAM. The smartphone is based on a MediaTek Dimnesity 810 chipset and packs a 5000 mAh battery supporting a 33W fast charge. The Realme Q5i...

Realme has also unveiled the Realme 9 5G Speed Edition which offers some powerful features. For starters, the device is fitted with a 6.6-inch display with an FHD+ resolution and a 144Hz refresh rate that can be adapted in 6 levels depending on the content you're viewing on the screen. Ultimately, this ensures optimal performance and increased power efficiency. The display is HDR10 certified, has 600 nits of...

The Realme 9 5G has just been announced featuring the industry's first ripple holographic design which uses six nano-layer films which spread the UV-nano gel imprinting evenly. The model is available in Stargaze White and Meteorite Black colors. The smartphone is built around a 6.5-inch IPS display with a FHD+ resolution and 90Hz refresh rate. Power is supplied by a 5000 mAh battery which is fitted in an 8.5 mm thin...