It was about time for Blackview to release a smartphone from its BV series. The last model from this series was announced in December last year. Now, the brand is treating its fans to a big-battery rugged device dubbed Blackview BV7100. The smartphone is designed to withstand most environmental challenges and has an IP68, IP69K rating, and a MIL-STD-810H certification. It can survive a soak in water of up to 1.5 meters for up to 1.5 hours, drops from 1.5 meters, dust, extreme temperatures, etc. The body features metal, polycarbonate, and TPU. The front is adorned with a 6.583-inch IPS display with an FHD+ resolution that supports Glove Mode. There's a V-shaped notch for the 8MP Samsung S5K4H7 selfie camera. There's a 12MP Sony IMX362 main camera on the back with a 6-element lens, an f/2.0 aperture, and dual-pixel AF. An 8MP ultra-wide/macro camera with a 117-degree FoV and autofocus adjoins it. Finally, there's a 2MP depth sensor. The Blackview BV7100 is based on the 12nm Helio G85 chipset with a 2GHz GPU, 1GHZ GPU, and a big graphite cooling area. The SoC is paired with 6GB of LPDDR4X RAM that can be virtually expanded by 4GB and 128GB of eMMC 5.1 storage that can be expanded via the microSD slot. The device is powered by a 13000 mAh battery with 33W fast charging support. It runs on Android 12 with Doke OS on top and supports NFC, dual-SIM 4G LTE, dual-band Wi-Fi, etc. Available in green, black, and green colors, the device features a SUB Type-C port, a side-mounted fingerprint sensor, and a customizable button. It has been listed on AliExpress for almost a month but the launch date is set for September 14th when it will be available for a heavily discounted price of USD 180 (down by USD 120). 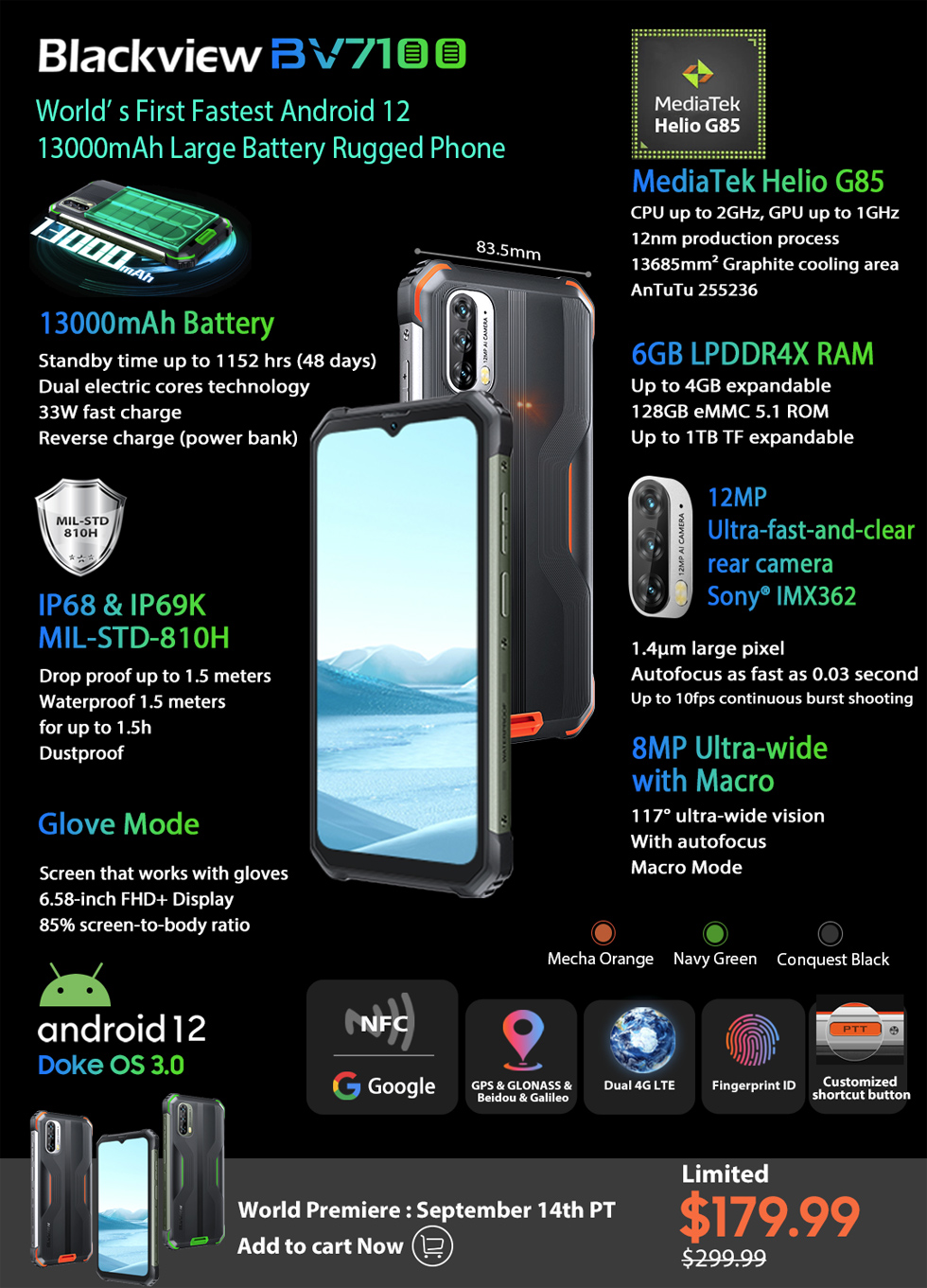 Blackview BV5200 is unveiled with a Helio A22 chipset, ArcSoft cameras

The Blackview BV5200 has been unveiled today with entry-level specifications. The smartphone has a classic rugged design with IP68, IP69K, and MIL-STD-810H certifications. It runs on Android 12 with Doke OS 3.0 on top and supports NFC, Bluetooth 5.0, and dual-band Wi-Fi 802.11ac. It is fitted with a USB Type-C port, a 3.5 mm headphone jack, and a side-mounted fingerprint sensor. The camera department comprises a...

It's been quite some time since Blackview released a smartphone from its BL series and quite some time it released a serious smartphone for that matter. To compensate for that, the brand releases two models - the Blackview BL8800 5G and the Blackview BVL8800 Pro 5G. The models are very much alike with the Pro version boasting a better set of cameras. Both models are based on a MediaTek Dimensity 700 chipset with 5G...

The Blackview BV8800 has made its worldwide debut sporting a 6.58-inch in-cell IPS display with an FHD+ resolution and a 90Hz refresh rate. It has a brightness of 480 nits. The device is based on a MediaTek Helio G96 chipset with 8GB of LPDDR4X RAM and 128GB of UFS 2.1 storage. The chipset's work under heavy loads is added by a liquid cooling system adopting a 3D copper pipe. An 8380 mAh battery with 33W fast...