Realme India has launched for the local market a trio of affordable smartphones. The first is the Realme C25, which has a 6.5-inch IPS display with an HD+ resolution and a waterdrop notch, where the 8MP front camera resides. On the back, there's a fingerprint reader plus a tri-camera module headed by a 13MP unit. The other two lenses are a 2MP unit for macro and another 2MP one for depth sensing. The device packs a beefy battery with a capacity of 6000 mAh. It supports 18W fast charging. Processing power depends on a Helio G70 chipset. The model runs on Android 10 with realme UI 1.0 on top. The Realme C25 is priced as follows: The Realme C21 has the same 6.5-inch HD+ IPS display and rear cameras. The front-facing camera is downgraded to a 5MP unit. The battery's capacity is decreased to 5000 mAh and the chipset is a Helio G35 one. The pricing of this model is as follows The Realme C20 is almost entirely the same as the C21. The only difference is the rear camera - on its back there's a single 8MP shooter. This smartphone has a single RAM+storage variant - 2GB+3GB and costs INR 6,999. 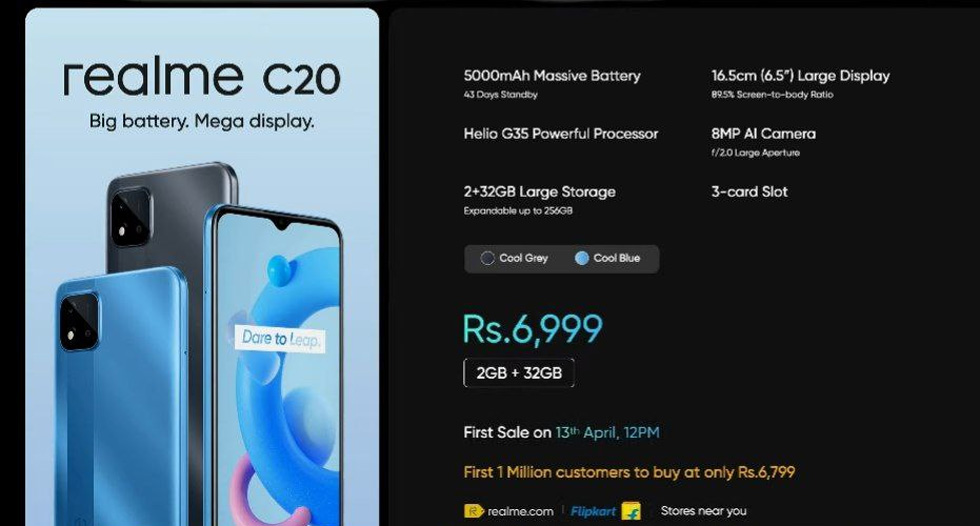 Realme has announced the Q3 series in China which comprises three models. The most interesting one is the Realme Q3 Pro 5G. This device is built around a 6.43-inch AMOLED display with an FHD+ resolution, 120Hz refresh rate, 360Hz touch sampling rate, 100% DCI-P3 color space coverage. Processing power and 5G connectivity depend on a Dimensity 1100 chipset with 8GB of RAM and 128GB/256GB of UFS 3.1 storage. It is...

Yesterday, the Realme 8 5G was announced in Thailand and today it had an official announcement in India. The device has a 6.5-inch IPS display with an FHD+ resolution, 90Hz refresh rate, and 600 nits of peak brightness. The body is available in black and blue colors. The camera department includes a 16MP front shooter with an f/2.1 aperture and a 5-element lens. On that back, there's a 48MP main shooter with an...