MediaTek has just announced its Dimensity 9200 chipset. It is based on TSMC's second-generation 4nm process that integrates 17 billion transistors. The new chip also uses the second-generation ArmV9 architecture with a pure 64-bit large-core CPU. It is the first chip to integrate the Immortalis-G715 Hardware Ray Tracing GPU and the first to be Wi-Fi 7 ready. Dimensity 9200 works with LPDDR5X RAM with 8533 Mbps speeds and is the first chipset to incorporate multi-cycle queue technology for accelerated UFS 4.0 memory. It also integrates an RGBW ISPP. Compared to Dimensity 9000, Dimensity 9200 offers CPU performance improvement by 25%, GPUY performance improvement by 32%, and power efficiency improvement by 41%. On AnTuTu, devices with this chip reach 1.26 million points, which makes it the current leader among flagship SoCs.

Dimensity 9200 has an octa-core CPU with a single 3.05GHz Cortex-X3 core, three 2.85GHz Cortex-A715 cores, and four 1.8GHz Cortex-A510 cores. There are 8MB of tertiary cache and 6MB of system cache. The graphics department is managed by an eleven-core Immportalis-G715 MC11 GPU. There's a 6th generation APU with 98% higher performance and 15% improvement in power efficiency. MediaTek's Hyper Engine 6.0 is also part of the package. The first smartphone to feature this powerful chipset will belong to the Vivo X90 series. 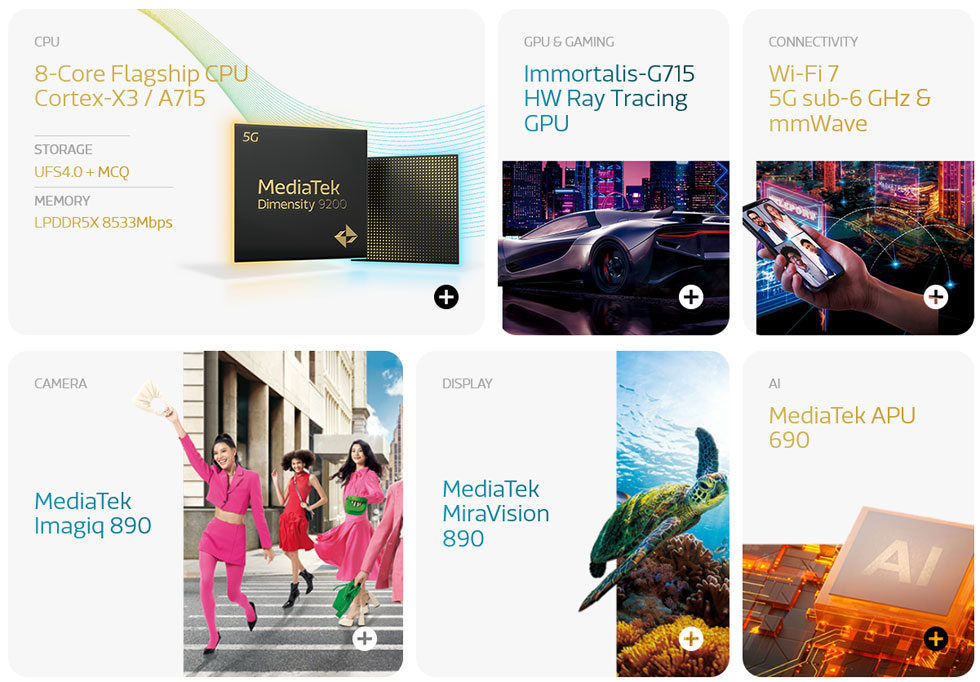 Vivo X90 and Vivo X90 Pro are finally official. The two devices have a lot in common. For starters, they both feature a 3D curved 6.78-inch AMOLED display with a QHD+ resolution (1260 x 2800 px), a 120Hz refresh rate, HDR10+ certification, and 10-bit gray depth support. Each has a 32MP selfie camera residing in a punch hole in the top-center of the display with an f/2.5 aperture, 24 mm focal length equivalent, and...

MediaTek has presented its latest mid-range chipset, which comes to succeed the Dimensity 920 - the Dimensity 1080. Compared to its predecessor, the new chip is capable of supporting cameras with larger resolutions - 200MP against 108MP. There's also a minor increase in CPU clock speed with the two big cores being clocked to 2.6GHz. All the rest remains the same as on the Dimensity 920, including the 6nm production...