The Asus Zenfone 9 has been just unveiled continuing the brand's attempts to establish a niche for flagship smartphones that offer a very compact form factor without compromising on performance. The model's tagline is by no chance "Compact size, Big Possibilities." It retains the footprint of the previous Zenfone generation while offering upgrades and improvements in all aspects. For starters, the device is built around a 5.9-inch Super AMOLED display with an FHD+ resolution, a 120Hz refresh rate, and HDR10+ certification. It is protected by a Corning Gorilla Glass Victus. There's a punch hole in the top left corner of the screen for the 12MP Sony IMX663 selfie camera retained from the Zenfone 8. It supports dual-pixel PDAF and 4K video recording.

The camera department on the back features two shooters - a 50MP Sony IMX766 main camera with an f/1.8 aperture and 6-axis gimbal stabilization. The latter is said to be three times more effective than simple OIS. Among all else, the main camera supports 8K video recording with EIS and 2x lossless zoom when set to shoot 16MP photos. The second rear camera uses a 12MP Sony IMX383 behind an ultra-wide lens with dual PDAF and macro photography support. In terms of audio, the Asus Zenfone 9 is fitted with two stereo speakers - a 7-magnet one at the bottom and a 3-magnet one at the top. Each is powered by a Qualcomm Aqstic WSA8835 amplifier along with Qualcomm hardware with Dirac tuning resulting in four audio styles and a 10-band equalizer.

The Zenfone 9 has a slightly larger battery with a capacity of 4300 mAh and 30W fast charging but you can also choose slower charging that's easier on the battery - 18W and 10W. Processing power is assigned to a Qualcomm Snapdragon 8+ Gen 1 chipset with three LPDDR5 RAM + UFS 3.1 storage combinations - 8GB+128GB, 8GB+256GB, and 16GB+256GB. Built-in memory cannot be expanded. The chipset is aided by a VC liquid cooling system. There's a side-mounted fingerprint sensor embedded in the Power button which also offers additional functions. For example, with simple swipes, you can open notifications, refresh websites, go to the home/end of web pages, navigate in media, etc. The frame of the device is made of aluminum alloy, while the rear shell is made of a polymer that's tougher than plastic and glass. The model is IP68 rated for water and dust resistance. The price of the Zenfone 9 starts at EUR 800 for the base 8GB+128GB version. 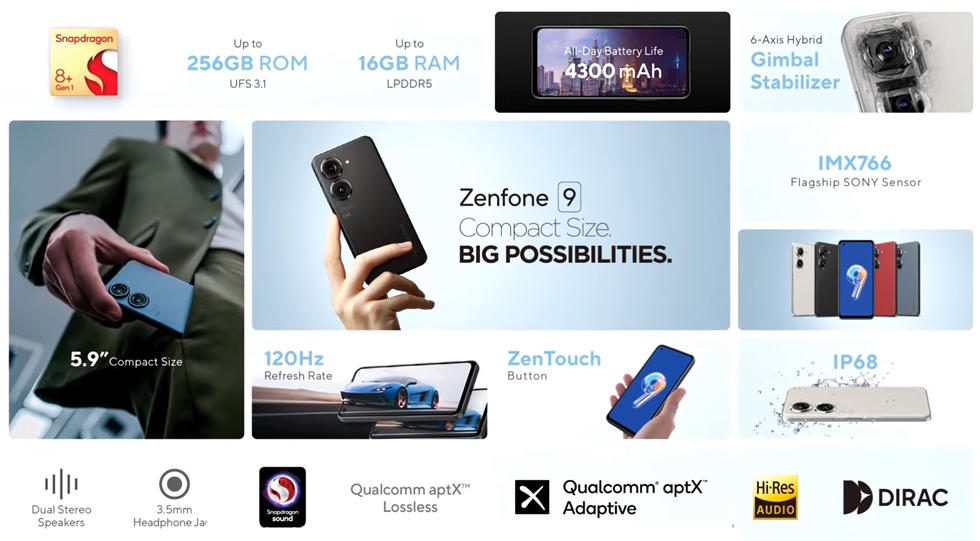 Asus has just unveiled the ROG Phone 6 and the ROG Phone 6 Pro. Both smartphones are based on Qualcomm's Snapdragon 8+ Gen 1 Mobile Platform. However, upgrades do not stop at providing the latest hardware. The guys from Republic Of Gamers have gone many steps further in analyzing gaming behavior and providing intelligent cooling solutions, so gamers enjoy the best performance out of this latest hardware. According...