Oppo will unveil the Oppo Reno7 series on November 25th. However, the brand couldn't help but announce its cooperation with Sony on the introduction of the new Sony IMX709 super-sensitive cat's eye camera that will debut on the Reno7 series. For starters, this sensor uses an RGBW color array. That is, it adds a white component to the standard RGB structure. In this way, the sensor is able to capture more light (60% increase) and at the same time noise reduction is improved (35% better). As a result, photo shooting in poorly lit environments should be drastically improved. Moreover, for the first time image algorithms are written directly into the sensor hardware. Pixel isolation technology is used to avoid signal crosstalk between neighboring pixels. Compatibility with multiple chip platforms reduces power consumption while improving processing efficiency.

As long as it concerns the other specs, rumor has it that the Oppo Reno7 will be based on a Snapdragon 778G chipset and will pack a 4500 mAh battery in a 7.59 mm thick body. The Oppo Reno7 Pro will be based on the Dimensity 1200-MAX, will support 65W super flash charging, and will be 7.45 mm thick. Of course, complete details will be shared in a couple of days during the official Oppo Reno7 series announcement. 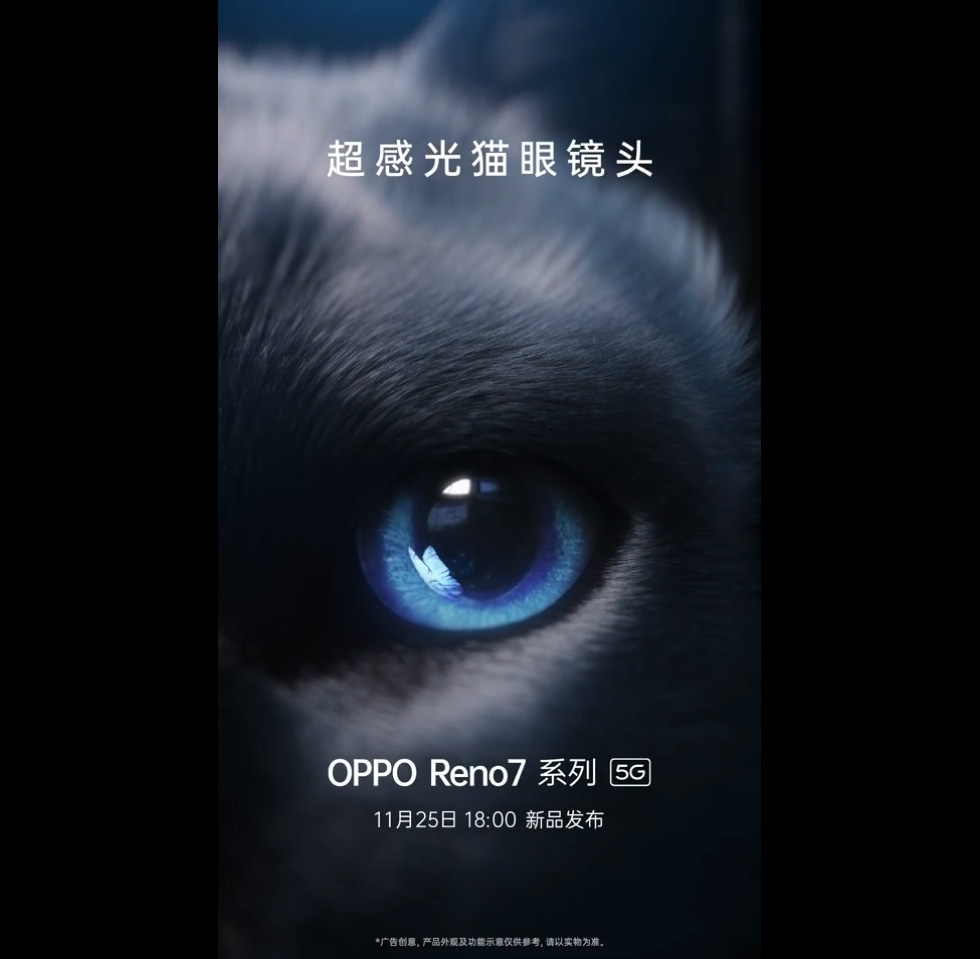 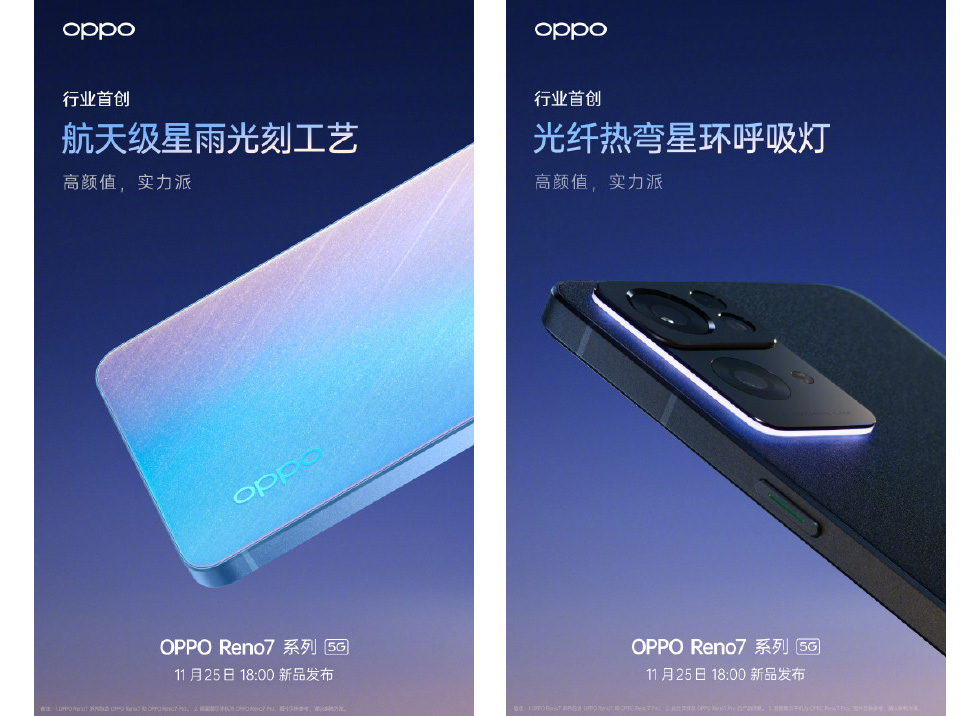 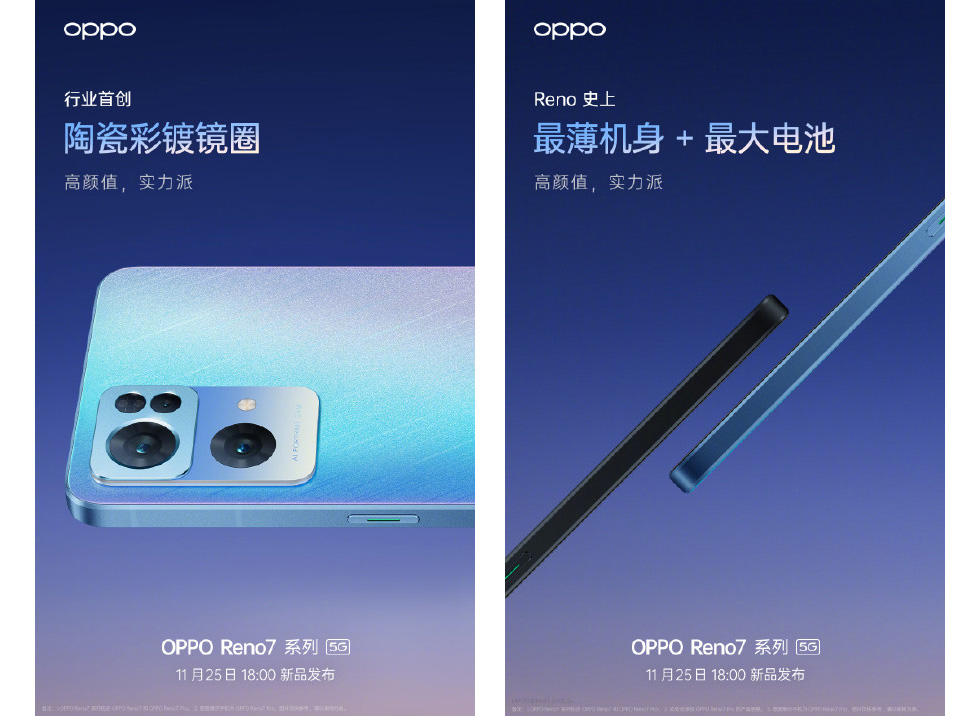 Today Oppo unveiled the Reno7 series of 5G smartphones. The vanilla Oppo Reno7 is built around a 6.43-inch AMOLED display with an FHD+ resolution and a 90Hz refresh rate. Power is supplied by a 4500 mAh battery with 60W fast charging. The camera department of the model features a 32MP IMX709 selfie snapper, which was explained in detail prior to the series presentation, and three rear shooters comprising a 64MP main...

The Oppo A93s 5G is announced in China

Oppo China has announced the Oppo A93s 5G for the local market. It is identical to the Oppo A93 5G in everything but the chipset. While the earlier model packs a Snapdragon 480 SoC, the A93s is based on a MediaTek Dimensity 700 one. Available in three colors - black, blue, and a gradient one, the device features a 6.5-inch FHD+ IPS display with a 90Hz refresh rate and a typical brightness of 480 nits. The static...

Oppo has launched the Oppo Reno6 Z 5G in Vietnam. The device is built around a 6.4-inch AMOLED display with an FHD+ resolution, 60Hz refresh rate, and 180Hz touch sampling rate. The body is available in dark gray and light blue colors. It houses a Dimensity 800U chipset that ensures 5G connectivity. There are 8GB of LPDDR4X RAM and 128GB of UFS 2.1 storage on board. A 4310 mAh battery keeps the lights on and...

OnePlus and Oppo are merging

Oppo has unveiled the Reno6 series today in China. Let's begin with the top model - the Oppo Reno6 Pro+ which is based on a Snapdragon 870 chipset and is powered by a 4500 mAh battery with 65W fast charging support. The smartphone is built around a 3D curved 6.55-inch AMOLED display with an FHD+ resolution and 90Hz refresh rate, 1100 nits of peak brightness and 100% DCI-P3 color space coverage. Its camera department...

Oppo has launched another smartphone from the Reno5 series. The Oppo Reno5 Z 5G with model code CPH2211 is currently available in a number of Asian countries. It has a 6.43-inch AMOLED display with a resolution of 1080 x 2400 pixels, 90Hz refresh rate, 135Hz touch sampling rate in normal mode, and 180Hz touch sampling rate in gaming mode. The display offers a normal brightness of 430 nits and a peak brightness of...

Well, Oppo has unveiled the Find X3 Neo and Find X3 Lite, indeed. Even though they did not receive a proper presentation, these smartphones do deserve attention. The Oppo Find X3 Neo has a 6.5-inch AMOLED display with FHD+ resolution 90Hz refresh rate, HDR10 certification. Processing power will depend on a Snapdragon 865 chipset with 12GB+256GB of RAM and storage capacity. It is powered by a 4500 mAh battery with...

Oppo focused mostly on the Oppo Find X3 Pro during its press conference today but it has also launched another model from the series, which deserves our attention. Unlike the rumored Find X3 Neo and Lite, which were seriously downgraded, the real Oppo Find X3 is a worthy successor of the Find X2 and is no less interesting than its Pro sibling. Actually, it offers the same design, footprint, display, cameras and...

Oppo has just unveiled the Oppo Find X3 Pro that features a metal and glass body that's IP68 rated and has a futuristic design. It is adorned with a 6.7-inch LTPO AMOLED display with a resolution of 1440 x 3216 pixels (QHD+) and a variable refresh rate from 5Hz to 120Hz. The touch sampling rate is 240Hz. When coupled with Oppo's O-Sync display Hyper Response Engine, the synchronization speed between the display and...

The Oppo F19 Pro+ and Oppo F19 Pro have been just announced. The two smartphones are identical in most ways. Both are equipped with a 6.43-inch AMOLED display offering a 60Hz refresh rate and an FHD+ resolution. Corning Gorilla Glass 5 protects the screens which also have punch holes for single 16MP selfie cameras. In addition, each of the smartphones features a 48MP OmniVision OV48B main shooter with an f/1.7...

WinFuture.de has once again leaked the specifications and photos of interesting smartphones prior to their official announcement. This time, the Oppo Find X3 series is the subject matter. Without further ado, here they are. If the specifications turn out to be true, and 99% they will, we can assume that despite the fact that the Pro version gets the latest chipset, overall, the Oppo Find X3 series is definitely a...