The Oppo K10x was unveiled in China featuring upper mid-range specs and a very affordable price tag. The model is based on a Snapdragon 695 chipset with 8GB/12GB of LPDDR4X RAM and 129GB/256GB of UFS 2.2 storage. The chipset is aided by a Diamond smart cooling system for sustainable performance. The smartphone is powered by a 5000 mAh battery with 67W fast charging support. Its front is adorned with a 6.59-inch IPS display with an FHD+ resolution and 100% DCI-P3 color space coverage. The screen has a refresh rate of 120 Hz and a touch sampling rate of 240Hz. The typical brightness measures 480 nits and reaches a maximum of 600 nits. There's a punch hole in the top left corner of the display for the 16MP selfie camera. It has a 5-element lens with an f/2.0 aperture and a 79° FoV. On the back, there's a trio of shooters headed by a 64MP sensor sitting behind a 6-element lens with an f/1.7 aperture and a 79° FoV. The main camera is adjoined by a 2MP macro unit and a 2MP depth sensor. Each has a 3-element lens, an 88.8° FOV, and an f/2.4 aperture. The Oppo K10x is available in black an aurora-gradient colors. Its pricing is as follows: 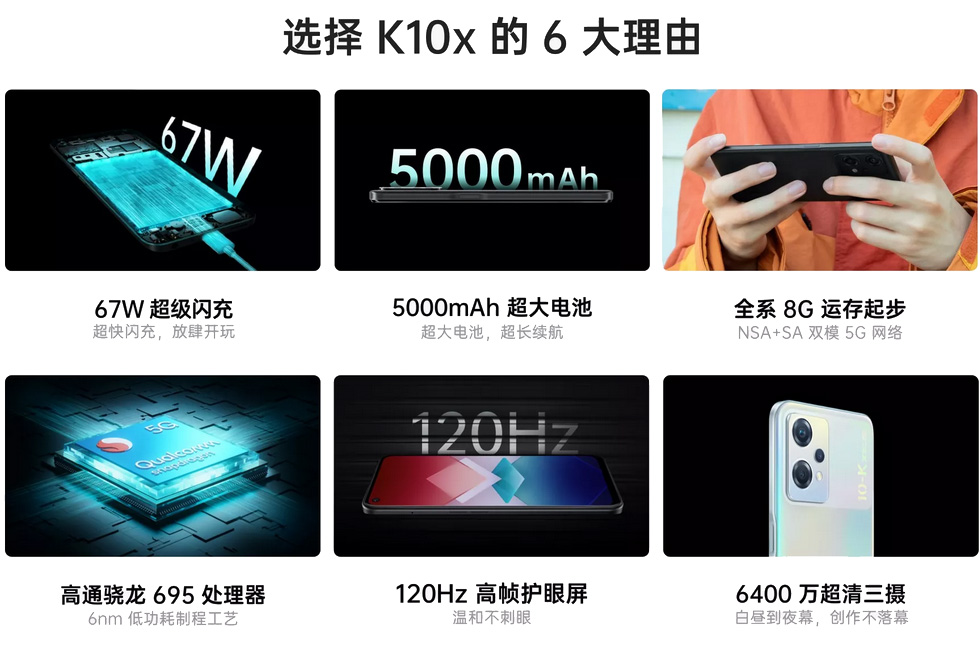 Oppo India has unveiled a 4G and a 5G F21 Pro. These are just re-named Oppo Reno7 4G and Oppo Reno7 Z 5G. The only difference between the India-bound models and the ones for the rest of the world, is that the India models don't have an NFC module. The Oppo F21 Pro 5G is a twin of the Reno7 Z 5G. It is built around a 6.43-inch AMOLED display with an FHD+ resolution, 60Hz refresh rate, and 180Hz touch sampling rate...

The Oppo Reno7 Z 5G (CPH2343) is launched in Thailand in two colors - Cosmic Black and Rainbow Spectrum. The model is built around a 6.43-inch AMOLED display with an FHD+ resolution, 60Hz refresh rate, 180Hz touch sampling rate. It covers up to 93% of the DCI-P3 space in Vivid Mode. The typical brightness is 430 nits with 600 nits of HBM. The camera department has a Dual Orbit Lights design with a 64MP primary...