Sharp has announced a quartet of new smartphones in Japan. All belong to the Aquos series and will be launched in the winter. All of them support dual-band Wi-Fi 802.11ac, Bluetooth 5.1, and have USB Type-C ports. They are also IP65/IP68 certified for water and dust resistance. 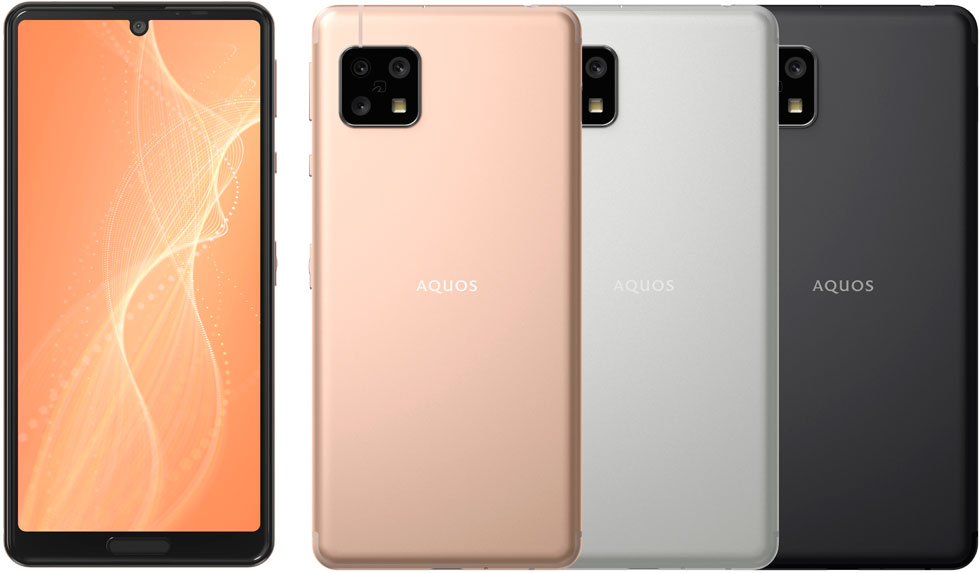 The Sharp Aquos Sense4 is a very compact smartphone with a 5.8-inch IGZO display. It offers an FHD+ resolution (1080 x 2280) and has a front-mounted fingerprint sensor - a capacitive unit placed on the chin. The model runs on Android 10 and is based on the 2.3GHz octa-core Snapdragon 720G chipset paired to 4GB of LPDDR4X RAM and 64GB of UFS 2.1 storage. Power is supplied by a 4570 mAh battery. The camera department includes an 8MP front-facing unit with an f/2.0 aperture and three rear shooters. The main one packs a 12MP sensor and has an f/2.0 aperture, 83-degree FoV, 24 mm focal length equivalent. It is adjoined by a 12MP ultra-wide snapper with a 121-degree FoV, 18 mm focal length equivalent, an f/2.4 aperture. Finally, there's an 8MP telephoto snapper with a 45-degree FoV, 53 mm focal length equivalent, and an f/2.4 aperture. 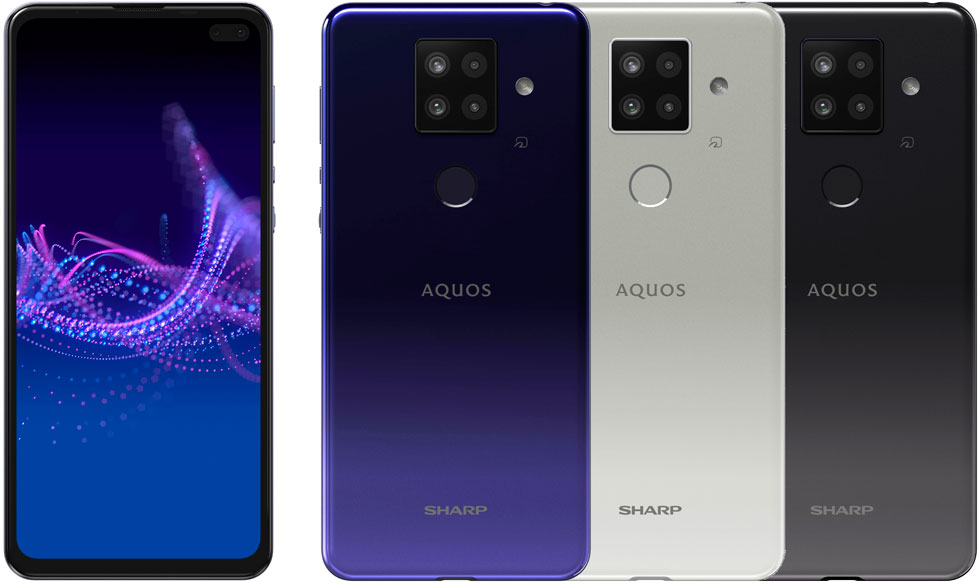 The Sharp Aquos Sense4 Plus offers a a lot more than the Sense4. It features a larger, 6.7-inch IGZO display with a resolution of 1080 x 2400 pixels. The screen provides 90Hz refresh rate and 240Hz touch sampling rate. On the back of the device, there's a fingerprint rearder and a quad-camera module. The latter includes a 48MP primary shooter with an f/1.8 aperture, 79-degree FoV, 25.3 mm focal length equivalent. There are also a 5MP ultra-wide snapper with a 115-degree FoV, a 2MP macro unit, and a 2MP depth-sensing lens. On the front, there are two cameras for selfies - an 8MP main unit and a 2MP depth-sensing one. A 4120 mAh battery keeps the lights on, while processing power is based on a Snapdragon 720G chipset with 8GB of RAM and 128GB of built-in memory. This smartphone also features stereo speakers and runs on Android 11. 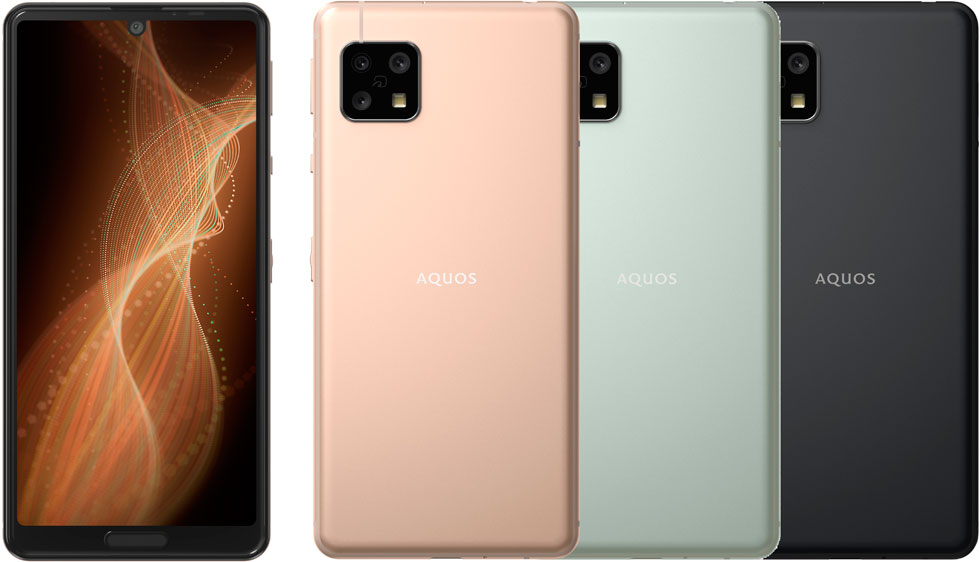 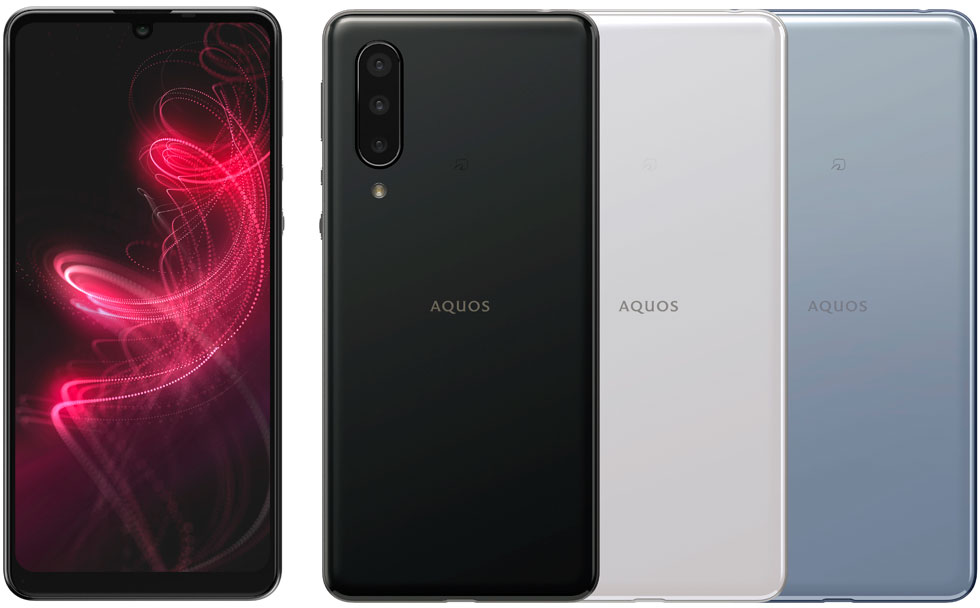 The Sharp Aquos zero5G Basic is an Android 10 smartphone based on a Snapdragon 765G chipset for dual-mode 5G connectivity. It is available with 6GB and 8GB of RAM as well as with 64GB and 128GB of built-in storage. The front is adorned with a 6.4-inch OLED FHD+ display with a 120Hz refresh rate and an in-display fingerprint sensor. A 4050 mAh battery powers the device. The front camera features a 16MP sensor with an f/2.0 aperture. On the back, there are three shooters including a 48MP primary one, a 13MP wide-angle unit with a 125-degree FoV, an 8MP telephoto camera with a 30-degree FoV.
Sharp will release the Aquos R5G to market on June 18

The Sharp Aquos R5G is Sharp's first 5G smartphone. The company has announced it will release the smartphone to market on June 18. The model has a 6.5-inch Pro IGZO display with a resolution of 1440 and 3168 pixels, a peak brightness of 1000 nits and HDR enhancer feature. Under the hood, the Snapdragon 865 chipset ticks paired with 12GB of LPDDR5 RAM and 256GB of UFS 3.0 storage. The 5G smartphone will also offer...

Sharp has unveiled that it will take part in the CES 2020 next month. It will display a number of products, including smart home units combined by Sharp's idea of AI IoT (AIoT as it has branded it), various innovative display solutions - transparent displays, 120-inch 8K display, etc. In addition to all this, Sharp will also exhibit a 5G smartphone and a 5G router. Both products will be pre-production versions and...

The Sharp Aquos Sense3 Plus goes on sale in Japan

Sharp has announced the Aquos Sense3 series on September 25 and as usual, it starts rolling out the models at the end of the year. Today the company announced the release of the Aquos Sense3 Plus, which will happen on December 25. The smartphone arrives with a 6-inch IGZO display, 1080 x 2220 resolution and a Snapdragon 636 chipset. There are 6GB of LPDDR4X RAM on board and a choice of two storage capacities - 64GB...

Sharp has announced the Android One S7 with Android 10, Snapdragon 630

Sharp has just announced a lovely smartphone for the Y!Mobile network in Japan. The Sharp Android One S7 is regrettably available for Japan only. This is a very compact handset as it measures only 70 mm in width and 147 mm in height. The sturdy body is also lightweight with an IPX5/IPX8 rating for water resistance and IP6X rating for dust resistance. The handset also has a MIL-STD-810G certificate for shock...

The Sharp Aquos Sense3 series of smartphones is official

On September 25, Sharp unveiled a trio of smartphones from its new Sense3 series, together with the Aquos Zero2. The base model is the Aquos Sense3. It features a 5.5-inch IGZO display with a resolution of 1080 x 2160 pixels. Power is supplied by a 4000 mAh battery, while performance relies on a Snapdragon 630 chipset paired to 4GB of RAM and 64GB of storage. The camera department includes a 12MP main shooter with...

Sharp has announced a trio of new smartphones, the most interesting one of which is the Aquos Zero2. This smartphone features a 6.4-inch OLED FHD+ display with a 240 Hz refresh rate. Actually, Sharp was the first company to offer 120 Hz displays on smartphones and not it is also the first to offer a 240 Hz refresh rate. The press release explains that the display uses a technology that inserts a black frame after...

Sharp has announced the Aquos R3 in Japan. The smartphone has a full screen with two notches - one on top for the front camera and one at the bottom for a capacitive fingerprint sensor. The display is a new-generation IGZO one that should offer richer and more precise colours. The unit is brighter, yet more power efficient compared to the display used on the Aquos R2. It supports 120Hz refresh rate and Dolby Vision...

Sharp unveiled the Aquos R2 Compact today and indeed, the handset seems to be quite compact compared to modern full-screen smartphones. The handset is only 64 mm wide and 131 mm high. It features a significantly smaller display compared to the 6-inch trend lately. The device has a 5.2-inch IGZO screen with an FHD+ resolution (1008 x 2280 pixels) and a 120Hz refresh rate. It is protected by a 2.5D curved Corning...

Sharp announces its first smartphone with an OLED screen in Japan, meet the Aquos Zero

Today Sharp has announced the Aquos Zero in Japan - its first smartphone with an OLED display. The handset was just teased at the IFA in Berlin a month ago and today all the specs are unveiled. For starters, Sharp Aquos Zero is built around a 6.2-inch OLED display with a QHD+ resolution and DCI-P3 colour space coverage, HDR and Dolby Vision support. In addition, this is advertised as the lightest smartphone in its...

More than a month ago, there was a leak that Sharp will re-enter the European smartphone market and now this is a fact. At the IFA 2018 in Berlin, Sharp announced that it will launch three new models. The first one is Sharp Aquos D10 - a re-named Aquos S3, which is built around a 5.99-inch FHD+ display and features a 12MP+13MP dual rear camera setup with optical zoom. The selfie shooter packs a 16MP sensor and...

Sharp will enter the European market with the Sharp B10, Aquos C10 and Aquos D10

At the IFA Berlin 2017 SHarp announced its intentions to enter the European market by the spring of 2018, however it did not manage to do so. Recently, the German website HandyFlash published the information about two Sharp smartphones: Sharp B10 and Aquos C10. The B10 features a 5.7-inch HD+ display, a 1.5GHz octa-core CPU, 3GB RAM, 32GB storage, two 13MP cameras, a 3840 mAh battery. It will run on Android 7.0...

Sharp has made the Aquos S3 High Edition official. The device retains the same 6-inch IGZO display with an FHD+ resolution from the previous model. It covers 135% of the sRGB colour space. However, the model is based on the Snapdragon 660 chipset instead of the Snapdragon 630. The RAM and storage are also higher, measuring 6GB and 128GB, respectively. Power is supplied by the same 3200 mAh battery, which in the High...

According to Taiwanese media Sogi, Sharp will release an upgraded version of the Aquos S3 later this month. The classic version of the model was announced in April this year and boasts a Snapdragon 630 chipset with 4GB of RAM and 64GB of storage. The upgraded version will pack a Snapdragon 660 mobile platform, 6GB of RAM and 128GB of internal memory plus support for the new Qi wireless charging. All the rest will be...