Xiaomi is currently unveiling the POCO X3 Pro. The smartphone is based on the Snapdragon 860 chipset and is the first in the world to do so. The speaker said this might be the last higher mid-range chipset with up to 4G connectivity for a while. It features an octa-core CPU and an Adreno 640 and reaches 491K points in AnTuTu. The chipset uses LiquidCool Technology 1.0 Plus for more reliable performance under increased stress. It is paired to UFS 3.1 storage that's 198% faster than UFS 2.1 in writing. You can get up to 256GB of storage that can be expanded with up to 1TB. There's up to 8GB of LPDDR4X RAM. Power is supplied by a 5160 mAh battery ensuring 2 days of autonomy. It offers 11 hours of gaming, 117 hours of music, 18 hours of video playback, and 6.5 hours of 1080p video recording. The battery supports 33W fast charging to charge from 0 to 100% in 59 minutes.

The POCO X3 Pro features a 48MP Sony IMX582 main shooter with an f/1.79 aperture. There's a 119-degree ultra-wide-angle camera with an 8MP sensor and an f/2.2 aperture. A 2MP macro unit and a 2MP depth-sensing unit are also available. The front-facing unit has a 20MP sensor. In terms of design, the model has the POCO reflective chroma design and the finish line design that's improved with a dual texture on the rear shell. It gives a matte finish the shuns off fingerprints. The available colors include Phantom Black, Metal Bronze, and Frost Blue. On the front, there's a 6.67-inch FHD+ display with 120Hz refresh rate and 240Hz touch sampling rate. The DynamicSwitch is there to adjust the refresh rate according to the content to optimize battery life. The screen is protected by a Corning Gorilla Glass 6.

The POCO X3 Pro features a pair of stereo speakers - the same ones found on the POCO X3 NFC. A Z-axis linear motor, IR blaster, NFC support, and a headphone jack are all present onboard the smartphone. It is priced as follows: The device will go on sale on March 24. 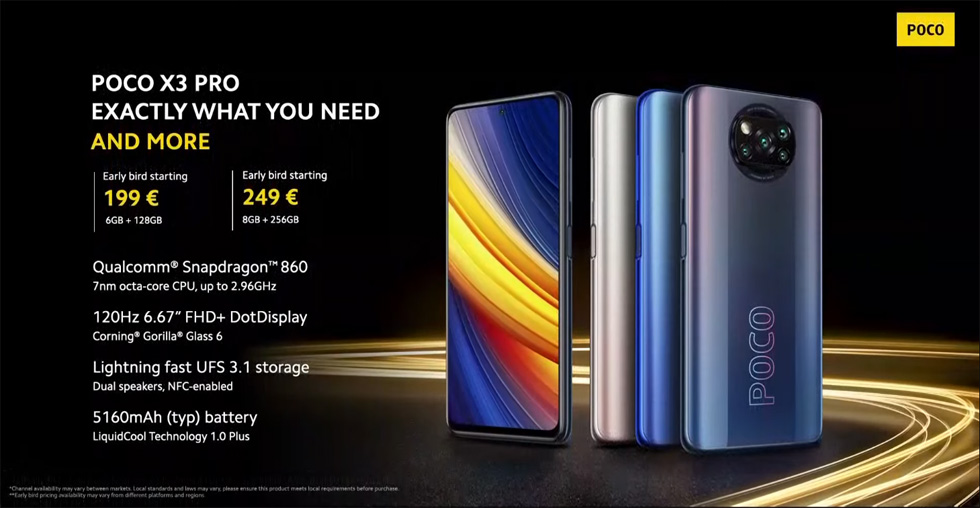 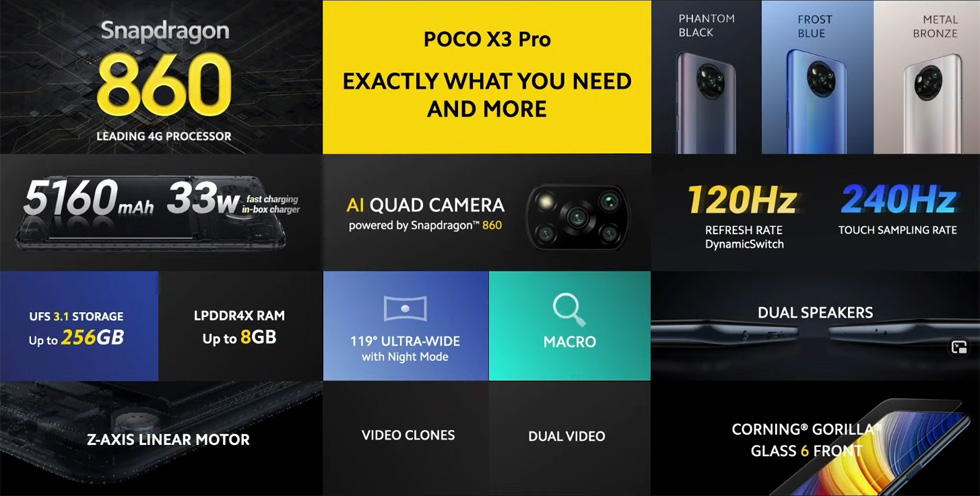