The Asus ROG Phone 3 is finally here and sure, it does not disappoint. True to its nature, the Asus ROG brand does offer a device that's entirely focused on delivering immersive gaming experience. Moreover, it is an upgrade over the previous generation - the ROG Phone 2.

The Asus ROG Phone 3 features a 6.59-inch AMOLED display with an FHD+ resolution, HDR and HDR10+ certification, TÜV Rheinland certification for flicker-free and low blue light. It offers 144Hz refresh rate and 270Hz touch sampling rate. The response time is 1 ms and the touch latency is 25 ms. The peak brightness of the display is 1000 nits and Asus advertises DeltaE<1 color precision. The display panel coves 113.3% DCI-P3, 108.8% NTSC, and 153.7% sRGB color spaces. It supports 10-point multitouch and glove touch. The screen is protected by a Corning Gorilla Glass 6. The battery has a capacity of 6000 mAh and supports up to 30W fast charging as well as 10W reverse wired charging.

The Asus ROG Phone 3 is equipped with a Snapdragon 865 Plus chipset that is paired to 12GB or 16GB of LPDDR5 RAM and UFS 3.1 type of storage that measures 512GB. The GameCool 3 cooling system in ROG Phone 3 uses an advanced 3D vapor chamber and a large heat sink that are precisely located to eliminate hotspots. The cooling system is incredibly effective at removing heat during full-speed operation via its specially designed vents. This comprehensive cooling system allows ROG Phone 3 to easily sustain peak performance during heavy gaming sessions, eliminating throttling to give you an expert edge against the competition. The AeroActive Cooler 3 clip-on external cooling fan delivers increased airflow to hotspots on the casing, particularly the area around the CPU and 5G chip. It can lower the surface temperature by up to 4°C, but it's still incredibly compact and connects easily to the side-mounted port.

The AirTrigger 3 system introduces a brand-new way to interact with your ROG Phone 3, using motion sensor that allows you to control the action by simply tilting the phone for totally intuitive gaming. The ultrasonic touch sensors - located on the long edges of ROG Phone 3 - can be assigned to any in-game action for a console-like experience. The touch sensors now support more gestures, including slide, swipe and inner / outer button detection.

The camera department of the Asus ROG Phone 3 includes a 24MP front-facing camera inherited from the previous generation ROG Phone. However, the rear setup sees a significant upgrade. It is headed by a 64MP Sony IMX686 shooter with an f/1.79 aperture, 6-element lens, 26.6 mm focal length equivalent to a 35 mm film. It is adjoined by a 13MP ultra-wide angle shooter with a 125° FoV, 11 mm focal length equivalent to a 35 mm film, f/2.4 aperture. Finally, there's a 5MP macro shooter with an f/2.0 aperture. The main camera can shooter 8K videos at 30 fps, 4K videos at up to 120fps, etc. The whole setup is aided by a 3-axis electronic image stabilization, on-lens PDAF, dual LED lights, etc.

The Asus ROG Phone 3 is the first to omit the headphone jack but offers two USB ports instead. The bottom one is USB-C 2.0 and the side-mounted one is USB-C 3.1. The device supports 5G NSA and SA bands. Please note that it has an "A Version" and a "B Version" in terms of network bands support. Dual-band Wi-Fi 6, Bluetooth 5.1 with aptX Adaptive, NFC, a wide range of satellite positioning systems are supported as well.

In the box, the Asus ROG Phone 3 is adjoined by an AeroActive Cooler 3, an Aero Case, USB-C to USB-C cable, USB-C to 3.5mm headphone jack adapter. The model is priced as follows: Asus has also unveiled the Asus ROG Phone 3 Strix Edition - a budget version of the above-described model which uses a Snapdragon 865 chipset instead and has less RAM and storage - 8GB and 256GB, respectively. It is priced at €799. 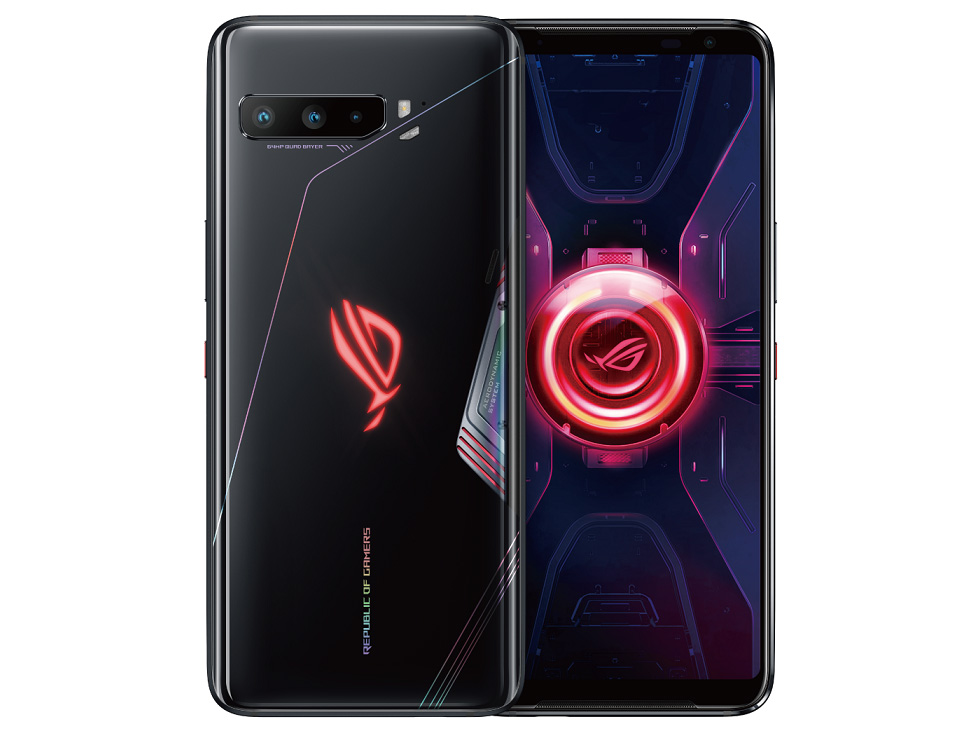 The Asus ROG Phone II has been listed on TENAA with two model codes - ASUS_I001DA and ASUS_I001DB. Hence, the main specs are completely revealed. The smartphone has a hefty weight of 240 g and seems quite thick at 9.78 mm depth. It is 170.99 mm high and 77.6 mm wide, which means it will be bulky. The front is occupied by a 6.59-inch OLED display with an FHD+ resolution and a 120Hz refresh rate. It is complemented by...

ROG Phone 2 with Snapdragon 855 Plus appears on Geekbench

The ROG Phone 2 by Asus is the first smartphone to get the new Snapdragon 855 Plus. It has now appeared on Geekbench codenamed ASUS_I001DC. Its single-core score is 3616 points and the multi-core score is 11103 points. The version in question has 12GB of RAM as well. Compared to the OnePlus 7 Pro and the Xiaomi Mi 9 which are equipped with a Snapdragon 855 chipset, the performance is almost the same. The Mi 9 has...

The ROG Phone 2 might be unveiled on July 23rd

A new poster by Asus on Weibo unveiled that the Taiwanese giant will hold a ROG Day on July 23rd. While the poster does not explicitly state that the ROG Phone 2 will be announced, it is very likely that it will be unveiled together with other ROG products such as motherboards and peripherals. The poster bears Tencent's logo as well hinting at a collaboration between Asus and the publisher of the mobile gaming hit...

Asus will launch the Zenfone 6 in India as Asus 6z

Due to the official prohibition of using the Zenfone brand in India, Asus will launch its latest flagship in the country under the name of Asus 6z. The Zenfone brand in India belongs to the Indian company Telecare Network India Pvt Ltd. The India-specific name of the model has been unveiled by Flipkart, which exclusively sales it in the country. The device will be launched on June 19th. Asus 6z features a 6.4-inch...