Vivo India has just unveiled for the local market the V23 series comprising the Vivo 23 and the Vivo V23 Pro. Both smartphones have metal frames with Fluorite AG glass rear shell in Stardust Black and Sunshine Gold color. The latter can change its color to a blue-green gradient if left to direct sunlight for 5-6 minutes. Both devices run on TunTouch OS 12 based on Android 12.

The Vivo V23 has a flat front and rear and is built around a 6.44-inch AMOLED display with an FHD+ resolution and a 90Hz refresh rate. There's a big notch on the front housing a 50MP eye autofocus selfie camera with an f/2.0 aperture and an 8MP ultra-wide angle selfie unit with a 105-degree FoV, f/2.28 aperture. They are aided by a dual-tone spotlight. On the back of the handset, there's a 64MP primary shooter with an f/1.89 aperture, an 8MP ultra-wide lens with an f/2.2 aperture, and a 2MP super macro unit with an f/2.4 aperture. The Vivo V23 is based on a MediaTek Dimensity 920 chipset with 5G connectivity, 8GB/12GB of RAM, and 128GB/256GB of storage. Power is supplied by a 4200 mAh battery with 44W fast charging. This model is priced as follows: The Vivo V23 Pro has a 3D curved front and back and a slightly larger display - 6.56 inches in diagonal. The AMOLED panel has an FHD+ resolution and a 90Hz refresh rate. The front camera department is the same, including the dual-tone spotlight. On the back, the main camera is upgraded to a 108MP unit, while the ultra-wide and super macro cameras remain the same. The chipset is also a more powerful one - a MediaTek Dimensity 1200 with the same choice of RAM and storage capacities. The battery is slightly larger with a capacity of 4300 mAh and again, 44W fast charging support. 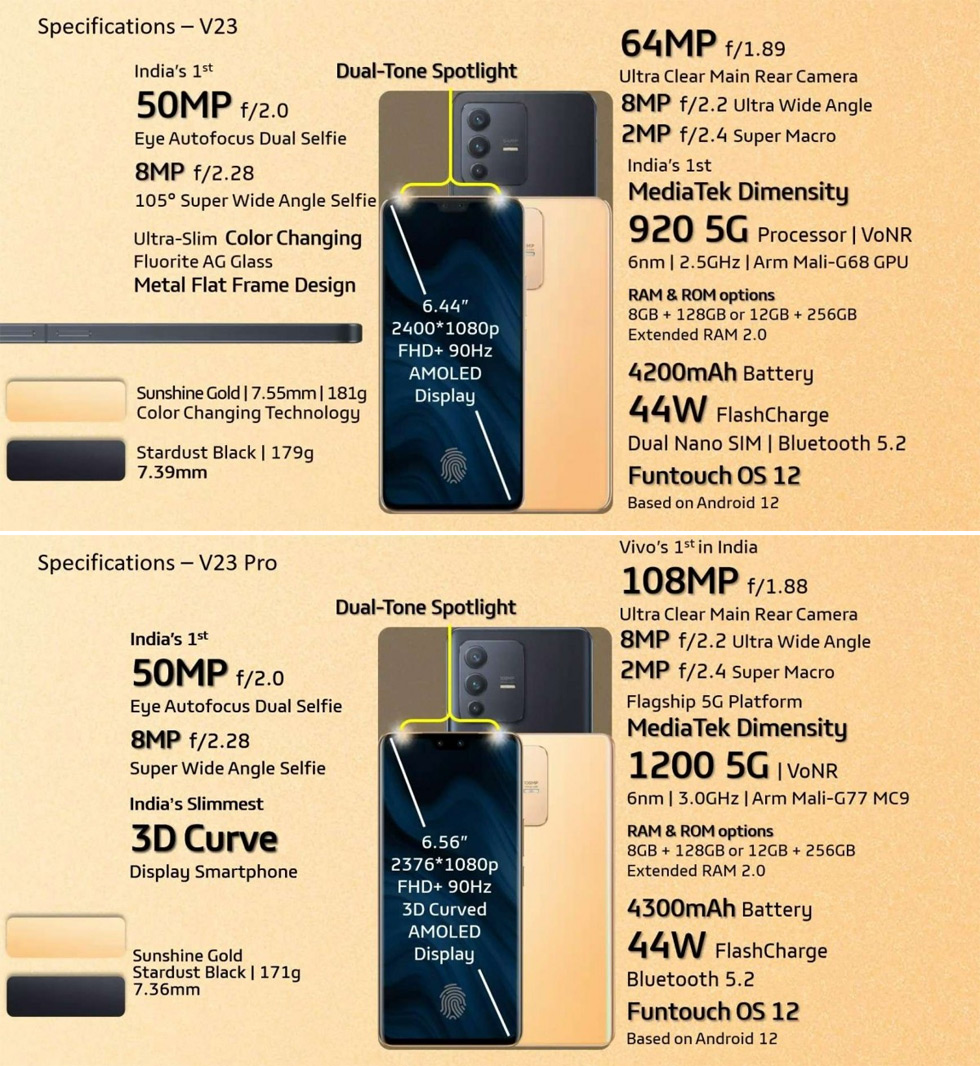 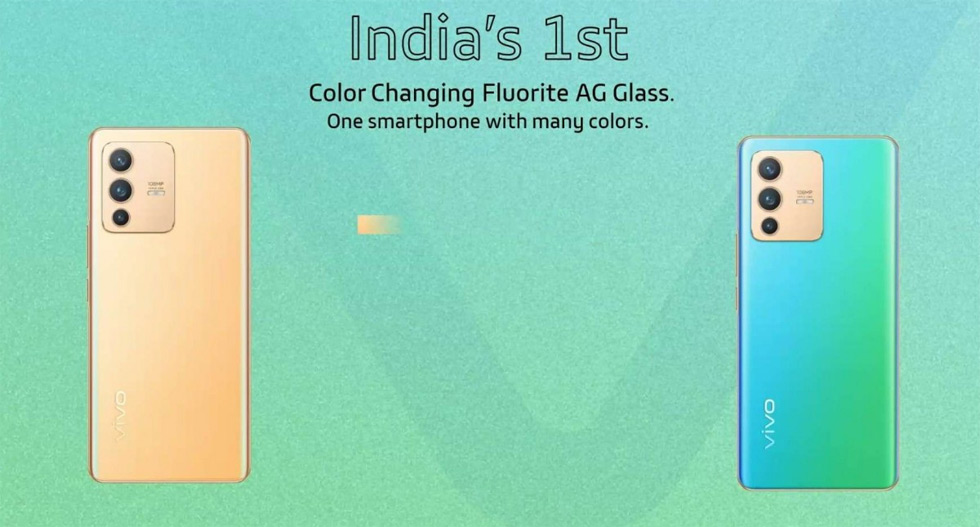 The Vivo Y55 5G is launched in Taiwan

Vivo continues launching smartphones for various South-East Asia markets that do not differ a lot from each other. The latest addition to its Y series is the Vivo Y55 5G for Taiwan. This smartphone is very similar to the Vivo Y55s 5G announced in China a month ago. The new model has the same 6.58-inch IPS display with an FHD+ resolution, the same 8MP front-facing camera with an f/1.8 aperture, the same 50MP main...

Vivo has unveiled the S12 series in China betting on 5G Dimensity chipsets and the new OriginOS Ocean based on Android 11 for both models comprising the series. Let's begin with the vanilla Vivo S12. This smartphone with model code V2162A has the same display as its predecessor - the Vivo S10. A 6.44-inch FHD+ AMOLED unit with a 90Hz refresh rate, 3M:1 contrast, and 98% NTSC coverage adorns the front of the device...

Vivo has presented the iQOO Neo 5S and the iQOO Neo 5 SE. Both models are the first to run on OriginOS Ocean based on Android 11. The iQOO Neo 5S is based on a Snapdragon 888 chipset paired with 8GB or 12GB of LPDDR5 RAM and 128GB or 256GB of UFS 3.1 storage. It has a 6.62-inch AMOLED display with an FHD+ resolution and a 120Hz refresh rate, just like the vanilla Neo 5. The battery is a dual-cell unit with a total...

The iQOO V2131A which is deemed to be the upcoming iQOO Z5x has received TENAA certification. According to the agency's listing, the smartphone is built around a 6.58-inch display with and FHD+ resolution and a 120Hz refresh rate. Power is supplied by a 5000 mAh battery with 44W fast charging while processing power depend's on MediTek's Dimensity 900 chipset. It is paired with 6GB/8GB of RAM and 128GB/256GB of...

The iQOO Z5 has just been unveiled in China. The new model brings several upgrades over its predecessor - the iQOO Z3. For starters, there's a larger display - a 6.67-inch unit with an FHD+ resolution and an IPS panel. It has a 120Hz refresh rate, a TÜV Rheinland Low Blue Light and HDR10 certification, DC Dimming, 1500:1 contrast. Second, the smartphone is based on a newer chipset. Namely, the Qualcomm Snapdragon...

Vivo has announced the three smartphones from the X70 series for China. The vanilla model - Vivo X70 carries over the same display from the Vivo X60 - a 6.56-inch AMOLED unit with an FHD+ resolution and a 120Hz refresh rate. However, it is based on a Dimensity 1200 chipset with 8GB/12GB of LPDDR4X RAM and 128GB/256GB of UFS 3.1 storage. Power is supplied by a 4400 mAh battery with 44W fast charging. The camera...

Vivo has presented its first in-house developed Image Signal Processor (ISP) - the Vivo V1. The brand confirmed it will power the Vivo X70 series, which is due to be announced this Thursday. According to Vivo, this ISP chip has a very low power consumption, yet it efficiently aids the GPU and DSP by executing parallel processes of complex calculations at high speed. The company has further optimized the write and...

Vivo has just introduced the iQOO 8 and iQOO 8 Pro, the first powered by Qualcomm's Snapdragon 888 Mobile Platform and the second - by Snapdragon 888 Plus, each device running on OriginOS based on Android 11. The iQOO 8 Pro is built around an E5 OLED LTPO display by Samsung. It has a resolution of 1440 x 3200 pixels and a VRR from 1Hz to 120Hz. The screen also supports 10-bit color bit depth (1.07 billion colors)...

Vivo India launches the Vivo Y72 5G, this time with a Snapdragon 480 chipset

Vivo is launching sequences of smartphones that do not differ a lot from each other. This is the case with the Vivo Y53s 5G which is the Vivo Y52s (t1 edition) but with a 64MP main camera instead. In all else, the two models are identical. There's a 6.58-inch IPS display with an FHD+ resolution, 90Hz refresh rate, and a 1500:1 static contrast ratio. A 5000 mAh battery with an 18W charger keeps the lights on. A...

Vivo is continuing to offer variants of smartphones that are already announced. The latest device is the Vivo Y70t for China. This smartphone is a variant of the Vivo Y70s which was announced 12 days ago. The brand didn't even bother to change the model codes and both are designated as V2002A. The two devices have identical footprints, batteries, displays, chipsets. Each is powered by a 5000 mAh unit with an 18W...

iQOO Neo5 Lite has been unveiled today sporting a Snapdragon 870 chipset. The smartphone is equipped with a 6.57-inch IPS display with FHD+ resolution and 144Hz refresh rate. A punch hole in the top right corner of the screen houses the 16MP selfie snapper, while on the back of the handset vivo has provided a 48MP main shooter, an 8MP ultra-wide camera, and a 2MP macro unit. The iQOO Neo5 Lite is powered by a 4500...