Today, Honor has also presented the Magic Vs duo. It comprises the vanilla Honor Magic Vs with model code FRI-AN00 and the Honor Magic Vs Ultimate Edition with model code FRI-AN10. Both devices are based on the Snapdragon 8+ Gen 1 Mobile Platform. The vanilla version is available with 8GB/12GB of RAM and 256GB/512GB of storage, while the Prestige Edition arrives with 16GB of RAM and 512GB of built-in storage. Both models are running on MagicOS 7.0 based on Android 12 and are powered by a 5000 mAh battery with 66W fast charging.

The main difference between the Honor Magic Vs and theHonor Magic Vs Ultimate Edition is in the design. The vanilla version is available in Bright Black, Burning Orange, and Azure Blue colors. The Prestige Edition has a Bright Black and a Phoenix Feather Gold color version with the latter having a special finish. The prices of the models are as follows: 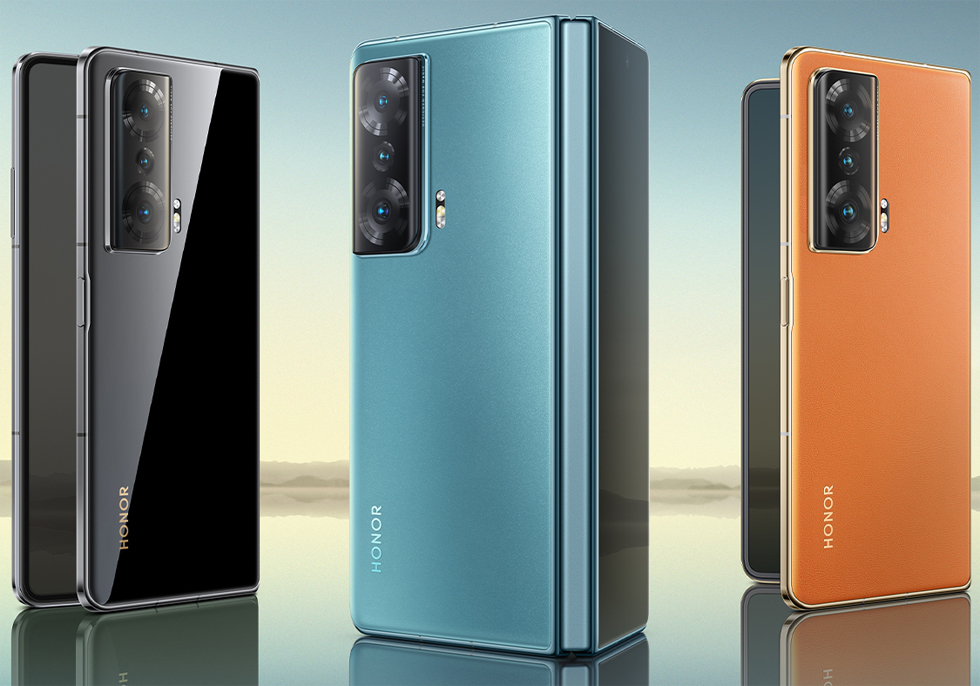 Honor Play 40 Plus with model code RKY-AN00 has been launched in China. This smartphone packs a 6000 mAh battery with 22.5W fast charging support. Yet, it manages to keep a slim waistline - 8.27 mm. It is also relatively lightweight at 196 grams. The available colors include black, silver, blue, and purple. The front is occupied by a 6.74-inch HD+ display with a 90Hz refresh rate and TUV Rheinland Eye Safety...

Honor has revealed in China the Honor X40 GT. The smartphone with model code ADT-AN00 runs on Android 12 with Magic UI 6.1 on top. Its processing power is based on a Snapdragon 888 chipset paired with 8GB/12GB of RAM and 256GB of built-in memory. The chipset is aided by a 16300 sq.mm. cooling system comprising a 4001 sq.mm heat pipe. A 4800 mAh battery keeps the lights on and supports 66W fast charging. The front of...

Honor has released an affordable 5G smartphone in China - the Honor Play 6C. The model is equipped with a 6.5-inch IPS display with an HD+ resolution and a 90Hz refresh rate. The waterdrop notch houses a 5P selfie camera with an f/2.2 aperture. The main camera uses a 13MP sensor behind an f/1.8 lens. It is adjoined by a 2MP depth sensor. The smartphone is powered by a 5000 mAh battery with 22.5W fast charging...

Honor Play 20a has been launched in China priced at CNY 999 (USD 139). The new handset runs on Android 12 with Magic UI 6.1 on top. It is powered by a 5000 mAh battery with 10W charging support. Processing power depends on a Helio G85 chipset paired with 6GB of RAM and 128GB of expandable storage. The device is built around a 6.517-inch IPS display with an HD+ resolution. There's a waterdrop notch for the 5MP...

The Honor X6 has been fully unveiled today. This model has exactly the same footprint and display as the Honor X8 5G. Hardware-wise, they are different. The new smartphone is based on a MediaTek Helio G25 chipset paired with 4GB of RAM and 64GB/128GB of storage. The latter can be expanded with up to 1TB. The display is a 6.5-inch IPS unit with an HD+ resolution and a waterdrop notch for a 5MP selfie camera. On the...

Honor X40 is unveiled in China with a Snapdragon 695 chipset, 120Hz AMOLED display

The Honor X40 was unveiled in China today featuring a 6.67-inch AMOLED display with an FHD+ resolution and a 120Hz refresh rate. The display also delivers 300 Hz touch sampling rate and supports 1920 Hz pulse with modulation. In addition, the screen is able to reach 800 cd/m² in high brightness mode and is TUV Rheinland Low Blue Light Certified. It has a 3D curved edge with a 45-degree angle. An under-display...

Honor 70 and Honor Pad 8 are unveiled for Europe

The Honor X40i is a new mid-ranger for the Chinese market. This smartphone has a very thin and lightweight body available in four lovely colors with a beautiful design of the dual camera module on the back. The 7.43 mm thin body houses a 4000 mAh battery that supports 40W fast charging. A Dimensity 700 chipset ticks under the hood providing 5G connectivity. The camera department includes an 8MP selfie snapper and a...

Honor took the stage yesterday to unveil the Honor 70 series which comprises three models. Let's begin with the top one - the Honor 70 Pro+. This smartphone features a 6.78-inch display with a 10-bit gray depth, 120Hz refresh rate, 1920Hz Pulse Width Modulation, and an FHD+ resolution. The display has a top-centrally positioned punch hole for a 50MP selfie camera with a 100° FoV and an in-display fingerprint sensor...

The Honor Play 30 goes official in China with a Snapdragon 480+ chipset.

In October last year, Honor presented the Honor Play 30 Plus. Today in China, the brand presented the Honor Play 30. This is an entry-level 5G smartphone with a 6.5-inch HD+ IPS display, 5000 mAh battery, and Snapdragon 480+ chipset. It has 4GB/8Gbn of RAM and 128GB of storage. The model is available in black, beige, blue, and gradient colors. There's a single 13MP main camera on the back and a 5MP selfie snapper on...

The Honor Magic4 Lite has been silently launched in Europe with a Snapdragon 695 chipset. It has a single RAM+storage version of 6GB+128GB and no memory card expansion option. It also runs on Android 11 with Magic UI 4.2 on top. There's a 6.8-inch IPS display with an FHD+ resolution and a 120Hz refresh rate. The battery's capacity measures 48000 mAh and 66W fast charging is supported. The camera department includes...

Honor has unveiled the Magic 4 series in China comprising three models. The vanilla one is called Honor Magic4 and is built around a 6.81-inch OLED display with a resolution of 1224 x 2664 pixels, 1-120H adaptive refresh rate, 360 Hz touch sampling rate, 10-bit color, 1000 nits of peak brightness, and MEMS. It also uses an LTPO backplane with 1920MHz PWM dimming. Additionally, the 12MP selfie camera offers a 100°...