For the presentation of the iPhone 13 series, Apple started with the iPhone 13 and the iPhone 13 mini. They share the same design and features, the mini simply packs all this in a smaller form factor. Both models have the same sleek, flat-edge design known from the past few years with an aluminum alloy body and Ceramic Shield for the display. IP68 rating for water and dust resistance has also been mentioned. Both models are also available in pink, blue, midnight, starlight, and product red colors. The Super Retina XDR displays of the iPhone 13 and iPhone 13 mini are the same as last year's models but offer 28% higher brightness - up to 800 nits typical levels and 1200 nits of peak brightness. The new thing is the A15 Bionic chip, which is manufactured after the 5nm production node with nearly 15 billion transistors. It houses a 6-core CPU with 2 high-performance and 4 high-efficiency cores for up to 50% faster performance than the one of the leading competition. There's a 6-core GPU for up to 30% faster graphics compared to the leading competition. There's also a new 16-core Neural Engine capable of processing 15.8 trillion operations per second. The main camera of the devices uses a new 12MP sensor with 1.7 um pixels, an f/1.6 aperture, 26 mm focal length, 7-element lens, 100% Focus Pixels. It also offers advanced video features such as Rack Focus in Cinematic Mode that locks the focus on a moving object. Cinematic Mode shoots in Dolby Vision HDR. Moreover, the iPhone 13 and iPhone 13 mini offer better battery life with 2.5 hours and 1.5 hours more than the iPhone 12 and the iPhone 12 mini, respectively. The iPhone 13 mini starts at USD 699 and the iPhone 13 starts at USD 799 with the base-level storage measuring 128GB. A 256GB and a 512GB variant is also available. 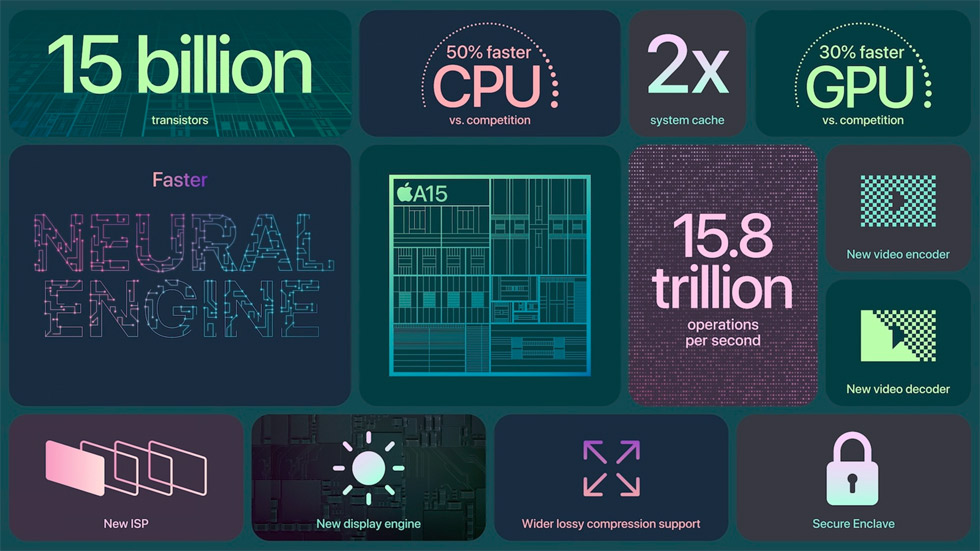 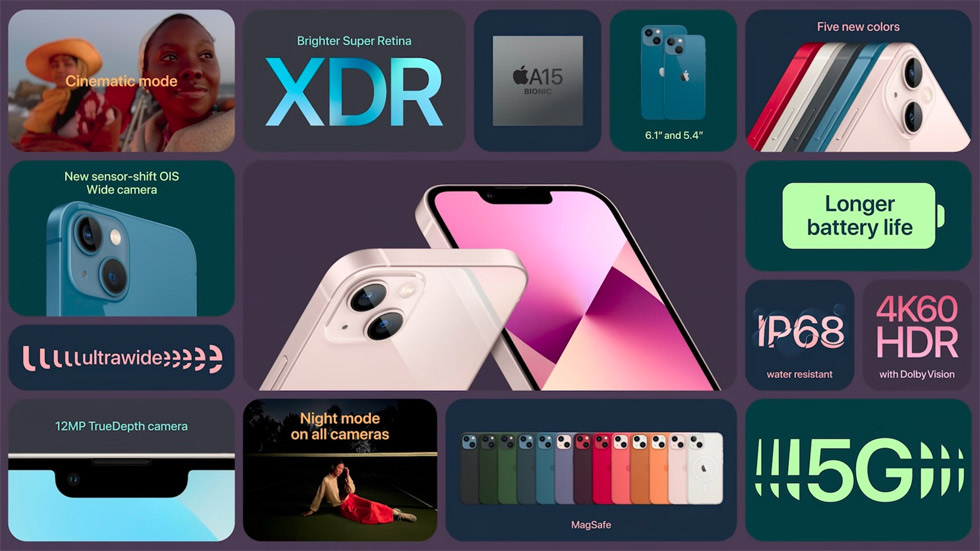 For the iPhone 13 Pro and the iPhone 13 Pro Max are now introduced featuring a custom finish that's resistant to abrasion and corrosion. It has four finishes - sierra blue, gold, silver, and graphite. The new design feature is again the 20% smaller TrueDepth camera just like on the smaller iPhone 13 models. In addition, the A15 Bionic chip on the Pro models features a 5-core GPU instead of a 4-core one. The displays for this year's model offer ProMotion with a 10Hz-120Hz variable refresh rate (VRR). For the first time, Apple introduces macro shooting and all rear cameras also support Night Mode. The rear cameras include a 77mm telephoto unit for up to 6x optical zoom, a main wide camera, and an ultra-wide unit. The video features include Cinematic Mode with a switching focus, Dolby Vision HDR shooting. Later this year, ProRes video will be introduced for professional video editing within the camera app. Batteries are larger as well with the iPhone 13 Pro Max lasting 2.5 hours more than the iPhone 12 Pro Max. This model starts at USD 1099 and the iPhone 13 Pro starts at USD 999. Apple also adds a 1TB storage option. 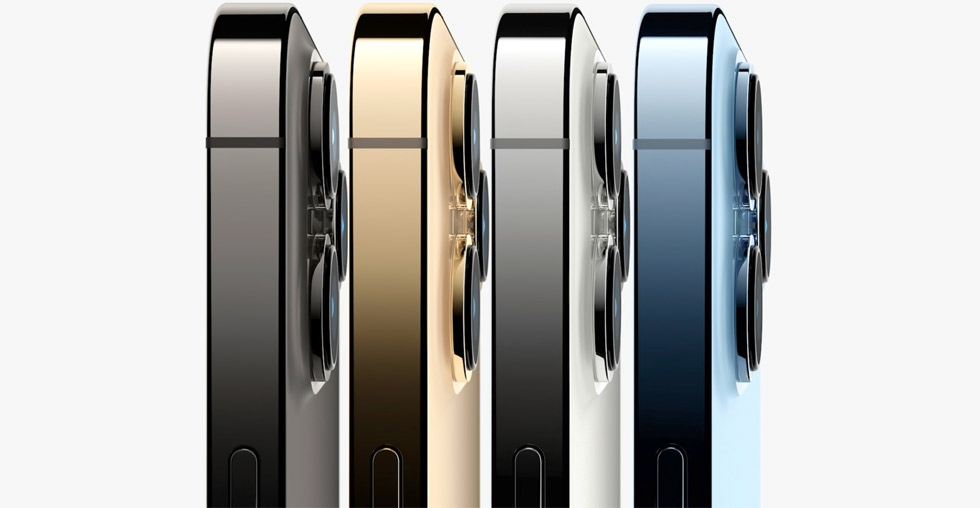 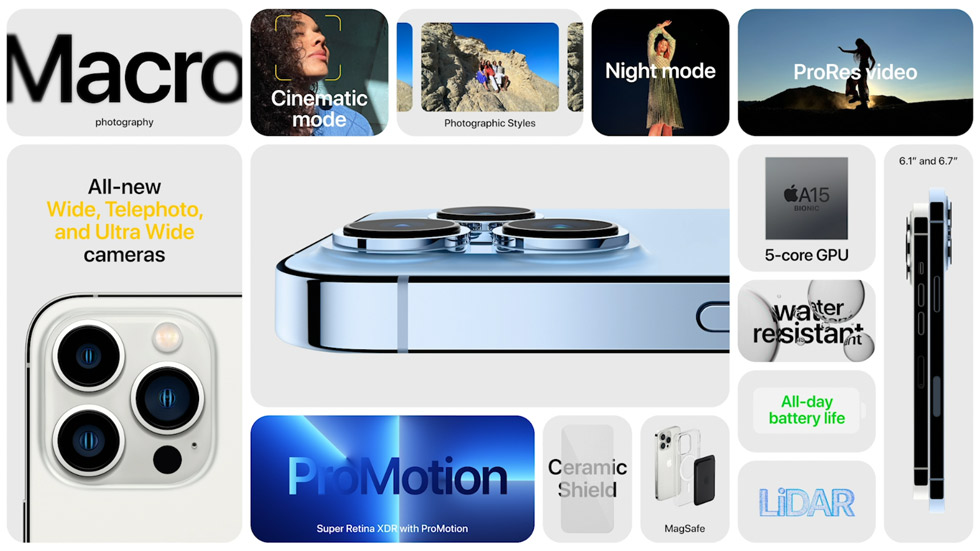 Apple jas just unveiled the new iPad and iPad mini. The 2021 Apple iPad features an A13 Bionic chip offering 20% faster performance in CPU, GPU, and Neural Engine. It also features an upgraded ISP for better photos. The front camera packs a 12MP sensor and a lens with a 122-degree field of view with Center Stage. Center Stage automatically detects people and moves the frame to follow them. This feature is supported...

Apple today previewed iPadOS 15, with new features that take advantage of the unique capabilities of iPad, helping users be more productive and taking the versatility of iPad even further. iPadOS 15 introduces a multitasking experience that is even more intuitive, making features like Split View and Slide Over easier to discover, easier to use, and more powerful. Notes goes systemwide with Quick Note, and offers new...

Apple today announced the most powerful and advanced iPad Pro ever. The addition of the Apple-designed M1 chip delivers a massive leap in performance, making iPad Pro the fastest device of its kind. The iPad Pro 12.9 (2021) features a new Liquid Retina XDR display that brings extreme dynamic range to iPad Pro, offering a stunning visual experience with more true-to-life details to the most demanding HDR workflows...