The MediaTek Dimensity 9000 leads the industry by embracing leading-edge TSMC N4 (4nm-class) production – the most advanced and power-efficient chip-making process ever. The Dimensity 9000 uses new Armv9 architecture CPUs to deliver unparalleled performance. Its octa-core CPU includes an Arm Cortex-X2 that bursts to epic 3.05GHz, while new LPDDR5X memory makes data immediately available, eliminating the wait to give immediate responsiveness in any app, whatever you’re doing. The CPU houses a single ultra-core - ARM Cortex-X2 clocked at 3.05GHz, three super cores - ARM Cortex-A710 clocked up to 2.85GHz, and four efficiency cores - ARM Cortex-A510. The SoC supports LPDDR5X RAM with up to 7500 Mbps speed. The Dimensity 9000 is also the world's first chipset to use the ARM Mali-G710 MC10 graphics processor, the industry's 1st raytracing SDK using Vulkan for Android. It supports up to 180Hz FHD+ displays.

The Dimensity 9000 integrates the only 5G smartphone modem with 3GPP Release-16 standard technology into the chip, amplifying sub-6GHz performance to go faster and further than ever before. It supports 3CC Carrier Aggregation (300MHz) 7Gbps downlink – incredible peak performance exclusively from sub-6GHz and provides the world's first R16 UL Enhancement to support Tx switching for both SUL and NR UL-CA based connections. The modem is paired the new-generation power-saving enhancement suite - MediaTek 5G UltraSave 2.0. 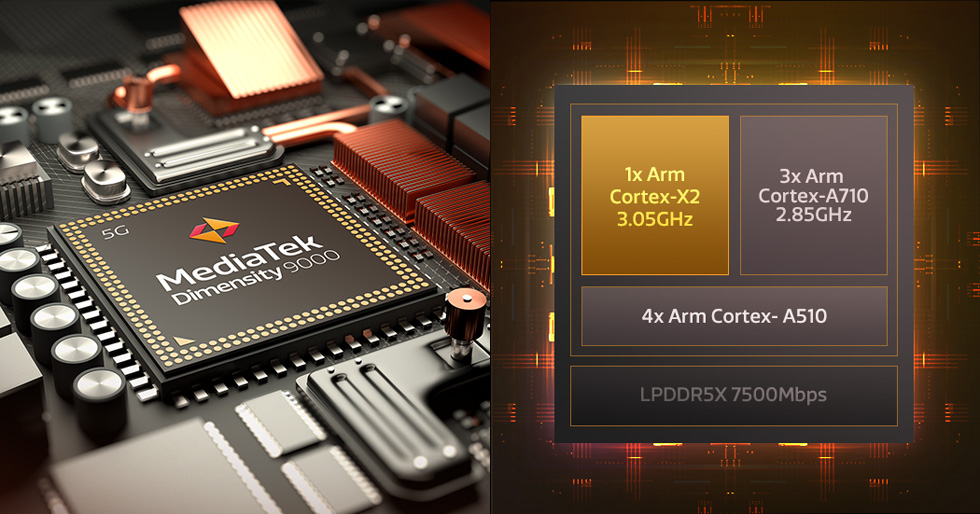 MediaTek announced two additions to its Helio G series: Helio G96 and Helio G88. The launch of these system-on-chips (SoCs) will give device makers the ability to provide powerful smartphone features with cutting-edge display and photography capabilities to bring intelligent mobile experiences to every customer. The MediaTek Helio G96 SoC ensures premium everyday user experiences with its support for 120Hz displays...

The latest 5G chipset from MediaTek is the Dimensity 900. Built on TSMC's 6nm process, this system-on-chip houses an eight-core CPU with two 2.4GHz Cortex-A78 cores and six 2GHz Cortex-A55 cores. The Arm Mali-G68 GPU features all the technologies of the bigger G88, but with a design optimized for power efficiency. Their work is complemented by a 3rd Generation MediaTek APU. Dimensity 900 supports LPDDR5/LPDDR4X RAM...

MediaTek Dimensity 1200 is unveiled based on the 6nm process, with a 3GHz CPU

MediaTek has not yet announced the Dimensity 700 (MT6833) chipset, yet Oppo has launched in China a new smartphone based on this system-on-chip - the Oppo A55 (PEMM00). It houses a 2.2GHz octa-core CPU and a 975MHz dual-core Mali-G57 GPU. The chipset is paired to 6GB of LPDDR4X RAM and 128GB of expandable storage. The smartphone has a 6.5-inch HD+ display with 480 nits brightness and 1500:1 static contrast ratio. It...

Ulefone Russia has teased on the social network VK (V Kontakte) the latest model from its successful Armor series. The upcoming Ulefone Armor 12 will be based on the newly announced MediaTek Dimensity 1200 chipset. The latter is a 6nm 5G system-on-chip with an octa-core CPU. It comprises of a single 3GHz Cortex-A78 core with 2X L2 cache, three 2.6GHz A78 cores, and four 2GHz Cortex-A55 cores. The graphics department...

MediaTek has presented two new 6nm chipsets - a first for the brand. The Dimensity 1200 SoC has an octa-core CPU comprising of a single 3GHz Cortex-A78 core, three 2.6GHz A78 cores, and four 2GHz Cortex-A55 cores. The graphics department is managed by an ARM Mali-G77 MC9 GPU. It supports FHD displays with up to 165Hz refresh rates and up to 200MP camera sensors. The Dimensity 1100 system-on-chip has an octa-core CPU...

MediaTek becomes the biggest smartphone chipset vendor in Q3 of 2020

The latest Counterpoint research in the field of the mobile chipset market shows that MediaTek has become the biggest smartphone chipset vendor in Q3 of 2020. This is a first for the brand. The main drive behind it is "MediaTek's strong performance in the $100-$250 price band and growth in key regions like China and India." Another reason is the gap created due to the US ban on Huawei. MediaTek was the first option...

MediaTek's latest 5G flagship chipset will be clocked up to 3.2 GHz

MediaTek's latest flagship system-on-chip will have a clock rate of up to 3.2 GHz. This information has been leaked today by Weibo blogger Digital Chat Station. The chipset will made after TSMC's 5nm or 6 nm process and will use a top Cortex-A78 core. Earlier, MediaTek said that its latest 5G flagship SoC will be released in Q1 of 2021 aiming for a pre-Chinese New Year release, which means we can expect it in...

MediaTek has announced the latest model from its Dimensity 5G chipsets - the MediaTek Dimensity 700 SoC. Built on the 7nm process, it is intended to provide 5G connectivity to mass-market, affordable smartphones. The Dimensity 700 supports displays with up to FHD+ resolution and 90Hz refresh rate, up to 64MP single cameras, etc. The chipset houses an octa-core CPU comprising of two Cortex-A76 cores clocked at 2.2GHz...