Infinix Zero Ultra is ready for market launch in India which is set for December 25th via Flipkart. The smartphone with model code X6820 features a 6.8-inch AMOLED display with an FHD+ resolution and a peak brightness of 900 nits. It offers a 120Hz refresh rate and a 360Hz touch sampling rate. The screen is TUV Rheinland certified for its low blue light properties and is protected by a Corning Gorilla Glass 3. It is 3D curved with a 71-degree curvature. The rear shell is also 3D curved and has a glass and leather option finish. The available colors include Coslight Silver and Genesis Noir.

The camera department of the Infinix Zero Ultra comprises a 32MP selfie camera with an f/2.0 aperture and three rear shooters. The main one sports a 200MP sensor behind an f/1.7 lens. It is adjoined by a 13MP ultra-wide camera and a 2MP depth sensor. There's a dual-LED flash on the front and a quad-LED flash on the back. An in-display fingerprint sensor, X-axis linear motor, and a USB Type-C port are also on board along with dual stereo speakers with DTS Surround Sound.

Infinix Zero Ultra is based on a MediaTek Dimensity 920 chipset with a 2.5GHz octa-core CPU and a quad-core Mali-G68 GPU. There are 8GB of LPDDR4X RAM on board and 256GB of storage that can be expanded with up to 256GB via a dedicated microSD card slot. Power is supplied by a 4500 mAh battery with 180W fast charging support. The smartphone runs on XOS 12 based on Android 12. It supports Bluetooth 5.0, Wi-Fi 6, and dual-SIM 5G. 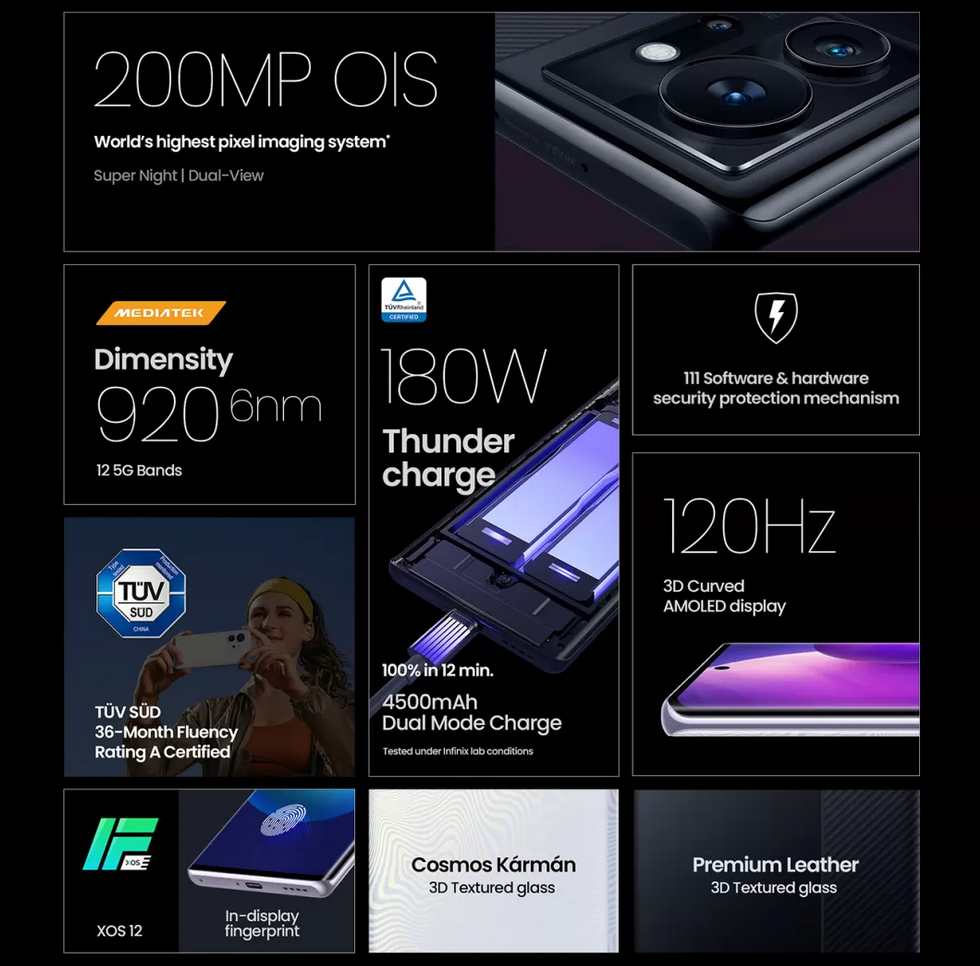 Infinix Zero 5G 2023 has been listed on the brand's website sporting a Dimensity 1080 chip with a 2.6GHz octa-core CPU and a Mali-G68 GPU. There are 8GB of RAM and 256GB of built-in storage with a microSD card slot for expansion. The smartphone boasts a 6.78-inch IPS display with a 120Hz refresh rate and 500 nits of brightness. Power is supplied by a 5000 mAh battery with 33W fast charging. The camera department...

Infinix has unveiled a couple of smartphones that are very similar - the Infinix Note 12 2023 and the Infinix Note 12i 2022. Both smartphones have almost identical footprints and color variants - white, black, and blue. The rear camera design is different but comprises one and the same cameras - a 50MP main shooter, an AI lens, a 2mp depth sensor, and a quad-LED flash. The selfie camera is different with a 16MP unit...

The Infinix Zero 5G with Dimensity 900 and a 6.78" FHD+ IPS display goes official

The Infinix Zero 5G has been announced today and happens to be the first 5G smartphone of the brand. For 5G connectivity, it relies on a MediaTek Dimensity 900 chipset paired with 8GB of LPDDR4X RAM and 128GB of UFS 3.1 storage that can be expanded with up to 256GB. The smartphone is fitted with a 6.78-inch IPS LTPS display with an FHD+ resolution and a 120Hz refresh rate. Power is supplied by a 5000 mAh battery...

Infinix has announced the Note 11 series and the most interesting smartphone from those is the Infinix Note 11 Pro. This device offers several upgrades over its predecessor - the Note 10 Pro which was announced back in May. For starters, the refresh rate has been increased from 90Hz to 120Hz, while the other parameters of the display are preserved - 6.95-inch diagonal size, IPS panel, FHD+ resolution (1080 x 2460...

Infinix and Lazada have partnered to launch the Infinix Hot 9 in South East Asia. The handset features a plastic body available in four colors - black, cyan, violet and green. On the back, there are four cameras and a rear-mounted fingerprint sensor. The main shooter packs a 16MP sensor with an f/1.8 aperture and a 5-element lens. The other three shooters have 3-element lenses. Two of them have 2MP sensor and the...