The Motorola Edge 30 Ultra is finally unveiled. The highlight of this smartphone is that it's the world's first to feature the 200MP Samsung ISOCELL HP1 image sensor. The sensor has a 1/1.22" optical format and uses 16-in-1 pixel binning. As a result, the camera delivers 12.5MP photos. There's also a 50MP shooting mode and a 200MP one. The camera is optically stabilized and uses an f/1.95 aperture. This camera is adjoined by a 50MP ultra-wide unit, and a 12MP Sony IMX663 telephoto camera. The punch hole in the display houses a 60MP OmniVision OV60a selfie camera. The display itself uses a 6.67-inch pOLED panel with an FHD+ resolution, a 144Hz refresh rate, and a peak brightness of 1250 nits. The Motorola Edge 30 Ultra is powered by a 4160 mAh battery with 125W ultra-fast charging support. It also supports 50W wireless charging. A Snapdragon 8+ Gen 1 chip ticks under the hood paired with up to 12GB of LPDDR5 RAM and up to 512GB of storage. The available colors of the model include Starlight White and Interstellar Black. Pricing starts at EUR 900. 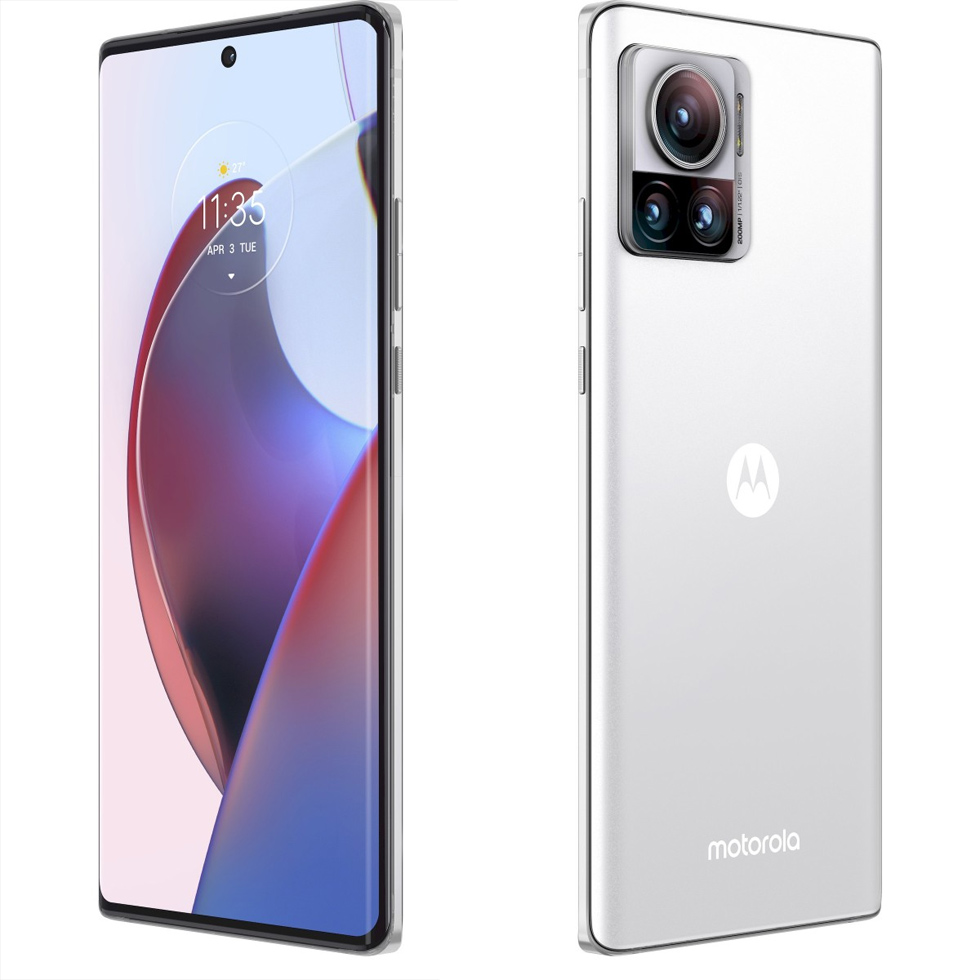 After the Motorola Edge 30 Ultra, the brand unveiled two other smartphones. The first is the Motorola Edge 30 Fusion which is built around a 6.55-inch pOLED display with an FHD+ resolution and a 144Hz refresh rate. The punch hole in the screen is the home of the 32MP selfie camera, while on the back there are three shooters - a 50MP main camera, a 13MP ultra-wide unit, and a 2MP depth sensor. The model is powered by...

The Motorola Edge 2022 has been unveiled featuring a Dimensity 1050 chipset with a 2.5GHz octa-core CPU and a tri-core Mali-G610 GPU. There are 8GB of RAM on board and 256GB of storage with no option for expansion. Power is supplied by a 5000 mAh battery with 30W wired, 15W wireless, and 5W reverse charging support. There's no charger in the box. The front is adorned with a 6.6-inch OLED display with an FHD+...

In addition to the Razr 2022, Motorola today unveiled another pair of smartphones in China - the X30 Pro and the S30 Pro. The Motorola X30 Pro features the Samsung ISOCELL HP1 sensor with a 200MP resolution, 1/1.22" optical format, and an f/1.95 aperture. The sensor uses 16-in-1 pixel binning and outputs 12.5MP photos by default. There's a separate mode for 50MP photos and another one for 200MP shots. The main...

Motorola Razr 2022 has been officially presented

A month ago, the design of the Motorola Razr 2022 was unveiled in China. Today, this foldable smartphone was presented in full. In many ways, it is improved compared to its predecessor. For starters, Motorola has created a new hinge that forms a pear shape when closing and achieves a no-gap closure. The top panel features a 2.7-inch gOLED outer display with a resolution of 800 x 573 px and a dual-camera setup with a...

Motorola Razr 2022 a.k.a. Razr 3 design has been officially presented

During an official event, Lenovo Mobile China presented the design of the upcoming Motorola Razr 2022. The third Razr will have a re-designed hinge, a more prominent external display, dual camera. According to the latest rumors, the smartphone will have a 6.7-inch pOLED inner display with a 120Hz refresh rate. The external display will have a higher, 3-inch diagonal size. The dual-camera setup will comprise a 50MP...

Motorola has unveiled a pair of smartphones in Brazil and is expected to hit other markets in Latin America, Asia, Europe, the Middle East, and India in the summer. The first model is the Motorola Moto G62 5G. It is based on a Snapdragon 480+ chipset paired with 4GB of LPDDR4X RAM and 128GB of storage. The latter can be expanded with up to 1TB using the microSD card slot in the hybrid, dual Nano-SIM tray. The device...

Motorola has launched the Moto G82 in Europe priced at EUR 330. The polycarbonate body is available in Meteorite Gray and White Lily colors and weighs 173 grams. It has an IP52 rating for protection against water splashes. The front is adorned with a 6.6-inch AMOLED display with an FHD+ resolution and a 120Hz refresh rate. A punch hole in the screen is the home of the 16MP selfie camera with an f/2.2 aperture. On...