Apple jas just unveiled the new iPad and iPad mini. The 2021 Apple iPad features an A13 Bionic chip offering 20% faster performance in CPU, GPU, and Neural Engine. It also features an upgraded ISP for better photos. The front camera packs a 12MP sensor and a lens with a 122-degree field of view with Center Stage. Center Stage automatically detects people and moves the frame to follow them. This feature is supported in FaceTime, Zoom, and other video apps. The new iPad features a True Tone display that adjusts the color temperature to match the surrounding environment. The iPad ships with iPadOS 15 and starts at just $329 for the 64GB version.

The 2021 Apple iPad mini features a 100% aluminum encloser. It is adorned with an 8.3-inch display and arrives in purple, pink, starlight, and space gray colors. It supports a wide color gamut, has an anti-reflective coating, and provides a typical brightness of 500 nits. The power button has an embedded fingerprint sensor. The iPad mini offers a 40% increase in CPU and an 80% increase in GPU performance. The Neural Engine is up to 2x faster. The iPad mini has a USB-C port instead of Apple's Lightning port. The cellular models support 5G with download speeds up to 3.5 Gbps. The 12MP camera arrives with an f/1.8 aperture, True Tone flash, enhanced ISP with Smart HDR, and can shoot 4K videos. The front camera is the same 12MP ultra-wide unit with Center Stage found on the classic iPad. Further, Apple has fitted the iPad mini with a new speaker system with stereo when you hold the device in landscape. The new iPad mini starts at $499. 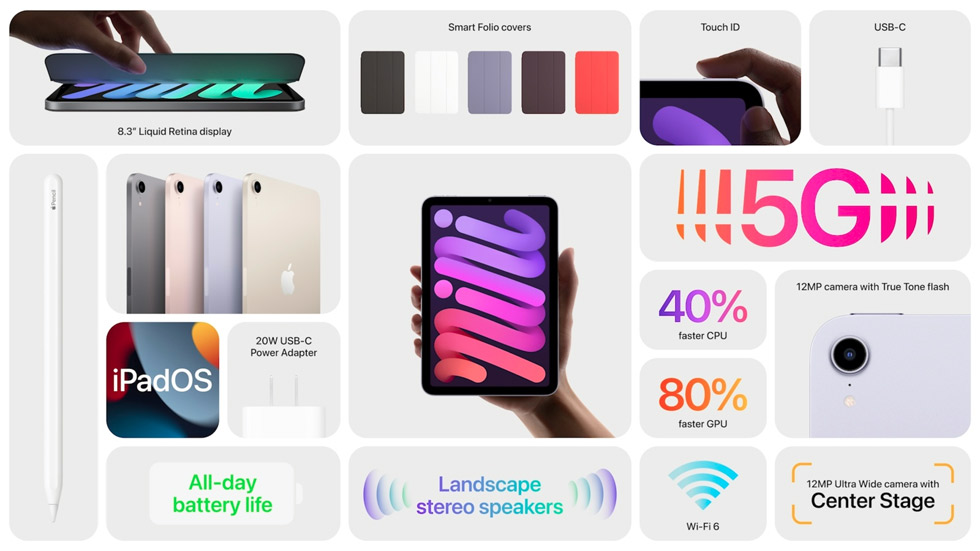 For the presentation of the iPhone 13 series, Apple started with the iPhone 13 and the iPhone 13 mini. They share the same design and features, the mini simply packs all this in a smaller form factor. Both models have the same sleek, flat-edge design known from the past few years with an aluminum alloy body and Ceramic Shield for the display. IP68 rating for water and dust resistance has also been mentioned. Both...

Apple today previewed iPadOS 15, with new features that take advantage of the unique capabilities of iPad, helping users be more productive and taking the versatility of iPad even further. iPadOS 15 introduces a multitasking experience that is even more intuitive, making features like Split View and Slide Over easier to discover, easier to use, and more powerful. Notes goes systemwide with Quick Note, and offers new...

Apple today announced the most powerful and advanced iPad Pro ever. The addition of the Apple-designed M1 chip delivers a massive leap in performance, making iPad Pro the fastest device of its kind. The iPad Pro 12.9 (2021) features a new Liquid Retina XDR display that brings extreme dynamic range to iPad Pro, offering a stunning visual experience with more true-to-life details to the most demanding HDR workflows...