Almost together with the WP13, which are currently reviewing, Oukitel has also unveiled the Oukitel WP15. The two smartphones are almost entirely identical in terms of specifications - a 6.52-inch IPS HD+ display with Corning Gorilla Glass, Dimensity 700 chipset with 5G connectivity, 8GB+128GB of RAM and storage, 48MP+0.3+2MP rear cameras and an 8MP front-facing camera. However, there's one big difference - the Oukitel WP15 with monstrously huge 15600 mAh battery. We suspect it uses two cells to achieve that. The bad news is that still uses an 18W charger meaning it will take hours to replenish it. On the other hand, it will take days to deplete such a battery, so we guess this is the "sacrifice" one must make to own a rugged 5G smartphone with a 15600 mAh battery - the biggest on a smartphone so far. The Oukitel WP15 will go on sale on August 23rd. Until then, you might want to enter the giveaway by visiting Oukitel's website (check the source link). It is already available for pre-order from AliExpress for USD 390. 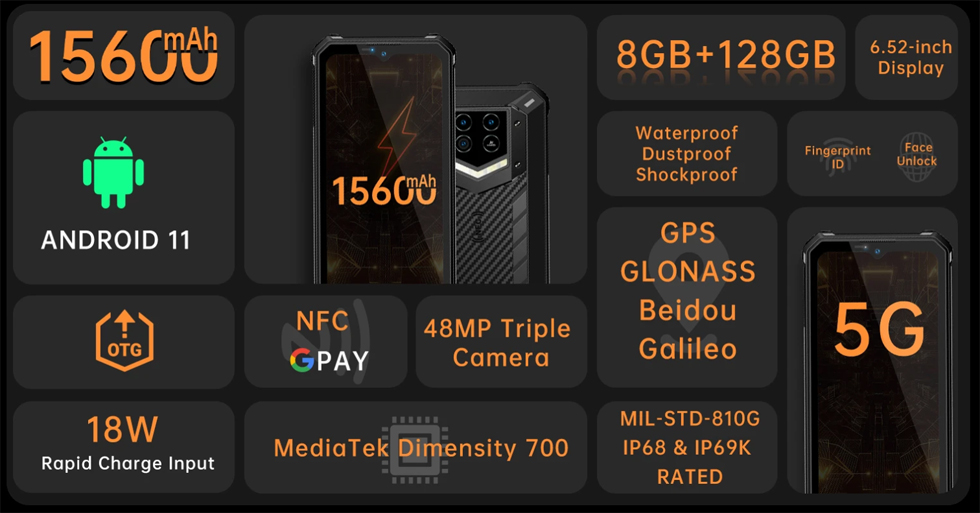 Our Oukitel WP13full review is now ready. As usual, we provide you with detailed information about every aspect of the smartphone, including various measurements, tests, lots of photos, graphs, comparison tables, and screenshots. If you want to acquaint yourself with this smartphone in detail, here are the separate pages from our in-depth review: Oukitel WP13 specifications and unboxing Oukitel WP13 design overview...

The Oukitel WP13 is finally here and it does not disappoint. This is a big device, which feels thinner and lighter than usual ruggedized smartphones. It runs on Android 11 with Oukitel's minor customizations. The model has a 6.52-inch IPS display with a resolution of 720 x 1600 pixels and a Corning Gorilla Glass for protection. The device is equipped with a side-mounted fingerprint sensor and an infrared...

Oukitel has released another budget smartphone priced at $99 and already available on AliExpress. The Oukitel C23 Pro is an entry-level smartphone with a plastic body available in green, black, and blue colors. It has a 6.5-inch IPS display with a resolution of 720 x 1600 pixels and an 8MP front-facing camera. On the back, there's a 13MP main shooter, a 2 MP macro unit, and two depth-sensing lens with unspecified...

The Oukitel WP10 5G is on pre-sale as of today, priced at USD 370. This affordable device offers not only the typical ruggedized qualities of a smartphone and dual-mode 5G connectivity but also a big battery. The 8000 mAh pack ensures reliable performance for two days of active use. The rugged body is adorned by a 6.67-inch in-cell IPS display with an FHD+ resolution. A MediaTek Dimensity 800 chipset is responsible...

Oukitel has announced its first 5G smartphone, the rugged - Oukitel WP10 5G. This affordable device offers not only the typical ruggedized qualities of a smartphone and dual-mode 5G connectivity but also a big battery. The 8000 mAh pack ensures reliable performance for two days of active use. The rugged body is adorned by a 6.67-inch in-cell IPS display with an FHD+ resolution. A MediaTek Dimensity 800 chipset is...

Oukitel C21 has just been launched to the market with a special price of USD 90 (original USD 190) valid until August 24. This smartphone is based on a Helio P60 chipset with a 2GHz octa-core CPU, 4GB of RAM, and 64GB of storage. It has a 20MP front-facing shooter and four rear snappers - a 16MP primary camera, a 2MP depth-sensing unit, a 2MP macro lens, and a 2MP auxiliary lens. Power is supplied by a 4000 mAh...