Smartisan a.k.a. Hammer Technology (锤子科技) will hold a special event at the Beijing National Stadium - the Bird's Nest on May 15th. Luo Yonghao, founder and CEO of Smartisan, has already shared that the new smartphone dubbed Nuts R1 will be a revolutionary product. Recently, Wu Dezhou, Vice President of the product line and hardware research and development at Smartisan, disclosed some information about this upcoming model on his profile in Weibo. The post is quite lengthy but the most important accents are two. First, the so-called "flagship of the next generation" will be a high-end product and will be based on a Snapdragon 845 mobile platform. It will have a large screen-to-body ratio, greatly improved camera, wireless fast charging, AI features. The second thing is that the device will carry several innovations in terms of interaction. No specifics have been provided but netizens expect that the Nuts R1 will offer an advanced gesture control. 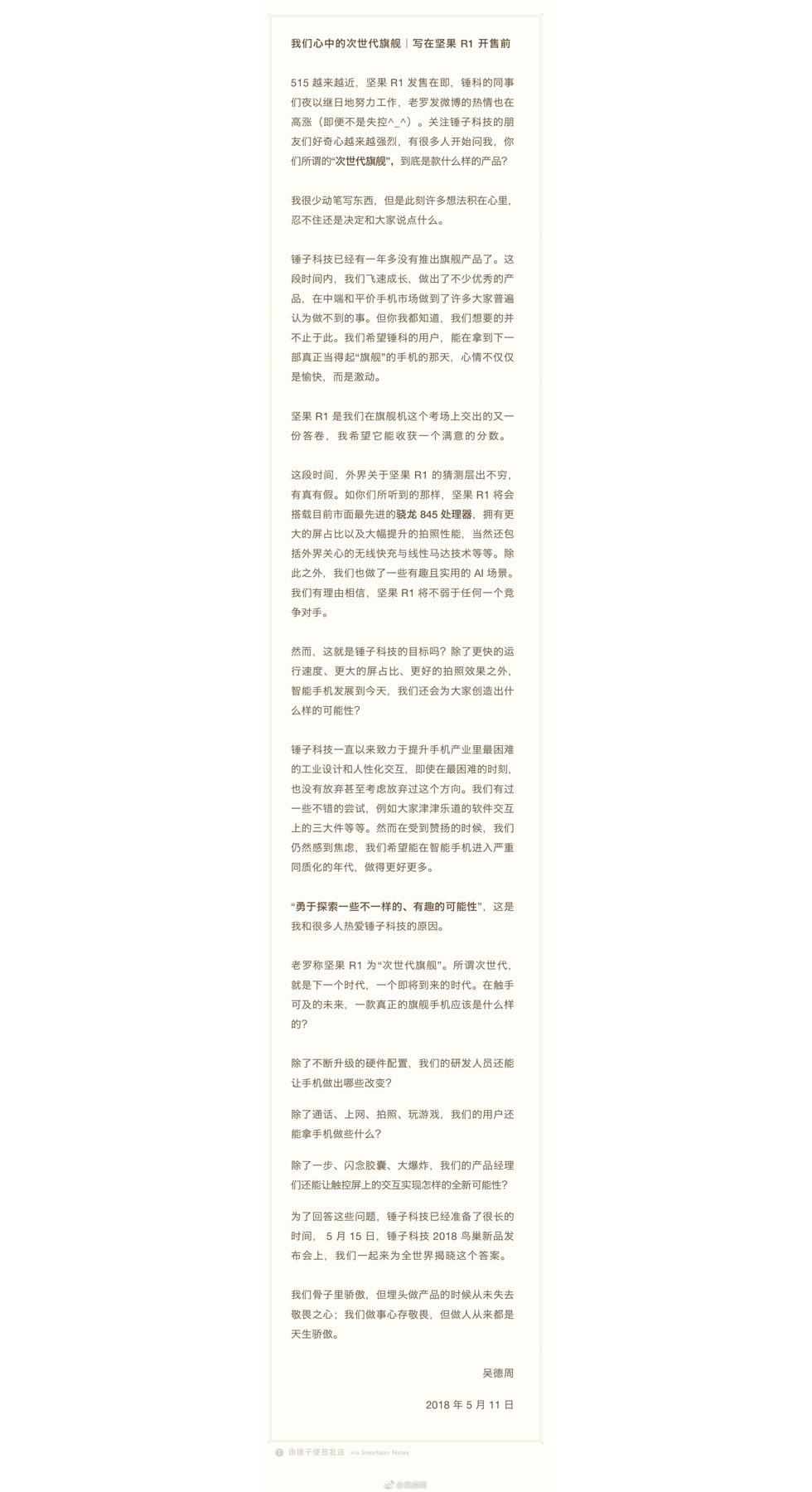 Smartisan has launched the Smartisan Nut R2 - a real flagship smartphone with a 6.67-inch AMOLED display with a resolution of 1080 x 2340 pixels. It offers 90Hz refresh rate, 500 cd/m² typical brightness, 800 cd/m² peak brightness, and 100% NTSC coverage. An in-display fingerprint sensor is provided as well. The device is powered by a 4510 mAh battery that supports 55W fast charging. Under the hood, a Snapdragon 865...

After more than a year of silence, Smartisan is back with a great new smartphone. The Smartisan Nut Pro 3 is built around a 6.39-inch AMOLED display with an FHD+ resolution. The display covers 100% of the sRGB and the DCI-P3 colour gamuts. It offers an ultra-low brightness of 2 nits and supports DC dimming. There's an in-display optical fingerprint sensor with fast unlock - 0.2 seconds. The camera department of the...

Smartisan Nut Pro 2S is announced, an unbelievable smatphone will be announced at the end of the year

Smartisan (Hammer Technology) has just unveiled the Nut Pro 2S. The device is based on a Snapdragon 710 chipset and is powered by a 3600 mAh battery with Quick Charge 3.0 support. They are packed in a very thin body - 7.15 mm in profile, available in four colours - glare red, glare blue, white and black. The black version retains the thin red horizon line the Nut Pro 2 has. It is graced by a FHD+ screen. The camera...

The Smartisan event at the Bird's Nest national stadium in Beijing has just begun. Today is the sixth anniversary of the establishment of Smartisan a.k.a. Hammer Technology (锤子科技). During this event, Smartisan will unveil its latest flagship smartphone - Nut R1 - that is said to change the industry for the next 8-10 years, according to Luo Yonghao, founder and CEO. The most important feature of this device is the...

Smartisan will unveil a new smartphone on May 15th

Smartisan is all set at unveiling a new smartphone on May 15th. The event will be held at the Beijing National Stadium in Beijing, China, at 19:30 local time. Most probably, this is the highly anticipated Smartisan R1, which will pack a Snapdragon 845 chipset and will run on Smartisan OS with a new artificial intelligence platform that's expected to provide a 200% increase in efficiency. At the IF 2018 Geek Park...

Smartisan Nut Pro 2 is finally official - half a year after the Nut Pro. Both actually don't have a lot in common. The new model has an 18:9 in-cell display (5.99 inches, FHD+ resolution) with a front camera (16MP sensor, f/2.2 aperture, AI beauty modes) and an earpiece above the unit. The chin is bare. The front and back of the device are covered with glass and in between, there's a metal frame with a thin red line...

Smartisan M1 and M1L are official with a Snapdragon 821 inside

Smartisan announced the M1 and the M1L, both of which are based on a Qualcomm Snapdragon 821 chipset with a 2.35GHz CPU and a 653MHz Adreno GPU coupled with 4/6GB of LPDDR4 RAM and 32/64G of UFS 2.0 memory. The models have a metal frame and their displays are covered with 2.5D curved glass. Smartisan M1 has a 5.15-inch FHD JDI display and a 3050 mAh battery, while Smartisan M1L features a 5.7-inch 2K display and a...

Smartisan T2 has been finally announced officially. Just like the previous model, the new Smartisan is carefully crafted and made of glass and aluminum alloy. The JDI IPS display has a 5-inch diagonal size and a 1080p resolution and is protected by a Corning Gorilla Glass 3 along with a 2.5D curved glass. It has a contrast ratio of 1000:1 and a 400 cd/m2 luminance. The 7.53 mm thin device packs a 2670 mAh battery...

Smartisan unveils its second smartphone - the Smartisan JianGuo a.k.a. U1

The Chinese start-up company has unveiled its second smartphone - the Smartisan JianGuo a.k.a. U1. The new model features some pretty good specifications, including a 5.5-inch 1080p IPS display, protected by a Corning Gorilla Glass 3, as well as a 64-bit Qualcomm Snapdragon 615 MSM8939 chipset with a 1.5GHz octa-core CPU and a 550MHz Adreno 405 GPU. The RAM capacity measures 2GB, while the internal memory has two...

Well, Smartisan T1 is now a fact. To cut the long story short, below we present the basic specifications of the smartphone. The PixelEyes display of the smartphone has a 4.95-inch diagonal size and a Full HD resolution, which results in a 445 ppi pixel density. The device is equipped with a Qualcomm Snapdragon 801 MSM8274AC SoC with a quad-core CPU clocked at 2.5GHz, an Adreno 330 3D CPU clocked at 578MHz, 2GB of...

The first Smartisan phone - Smartisan T1 - has received its network license and will be launched later today. It operates with Smartisan OS based on Android, which was released almost a year ago. The basic specifications of the smartphone include a 5-inch Full HD OGS display made by Sharp, a Snapdragon 801 SoC with support for 2G GSM and 3G WCDMA networks, 2GB of RAM, and 2750 mAh battery. Smartisan T1 also features...