Infinix has announced the Note 11 series and the most interesting smartphone from those is the Infinix Note 11 Pro. This device offers several upgrades over its predecessor - the Note 10 Pro which was announced back in May. For starters, the refresh rate has been increased from 90Hz to 120Hz, while the other parameters of the display are preserved - 6.95-inch diagonal size, IPS panel, FHD+ resolution (1080 x 2460 pixels). Secondly, the chipset has been changed to a MediaTek Helio G96 one with only one RAM+storage option - 8GB+128GB (LPDDR4X and UFS 2.2, respectively). The battery remains the same with a capacity of 5000 mAh and 33W fast charging support. The main rear camera remains also the same featuring a 64MP sensor. However, the auxiliary cameras are reduced by one and now comprise a 13MP telephoto and a 2MP depth-sensing one. On the front, there's a 16MP selfie snapper residing in a punch hole in the top center of the display. The a href="https://www.devicespecifications.com/en/model/2bfc57d3">Infinix Note 11 Pro is fitted with dual speakers with DTS audio, a 3D 9-layer graphene film for cooling, a side-mounted fingerprint sensor, USB Type-C port, and a headphone jack. It runs on Android 11 and is available in Mist Blue, Mithril Gray, and Haze Green colors. 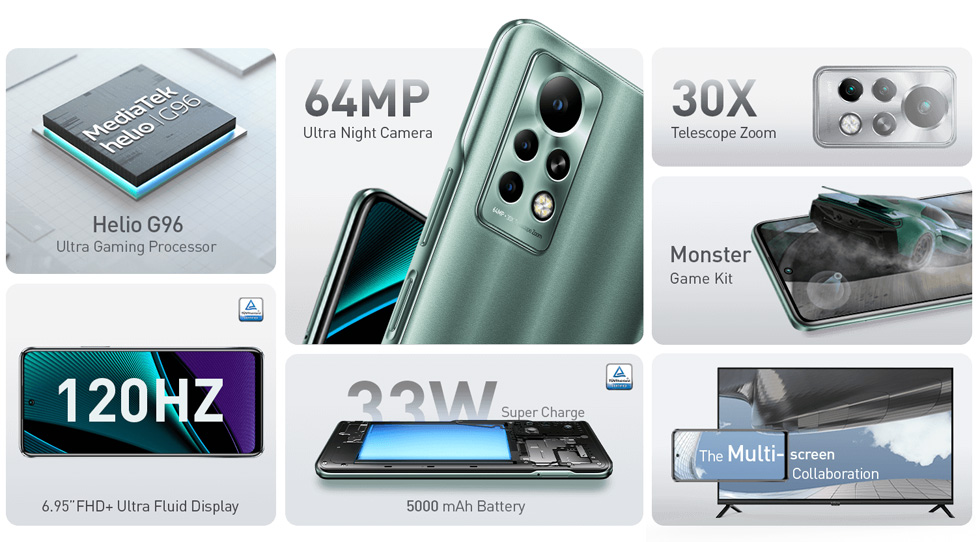 Infinix and Lazada have partnered to launch the Infinix Hot 9 in South East Asia. The handset features a plastic body available in four colors - black, cyan, violet and green. On the back, there are four cameras and a rear-mounted fingerprint sensor. The main shooter packs a 16MP sensor with an f/1.8 aperture and a 5-element lens. The other three shooters have 3-element lenses. Two of them have 2MP sensor and the...