Poco has just announced the Poco M3 - its first smartphone from the entry-level M series. For starters, the device is equipped with a 6000 mAh battery with an 18W fast charger and OTG support. Moreover, the battery has an increased lifespan to 1000 cycles at room temperature around 25 degrees Celsius. In addition, the Poco M3 features a 48MP main shooter, a 2MP depth sensor, and a 2MP macro camera. There are several software features for the camera such as Movie Frame, time-lapse, color focus, night mode. The front features a 6.53-inch display with an FHD+ resolution and around 90% screen-to-body ratio, which is one of the best in the entry-level market. The screen is protected by Corning Gorilla Glass. Processing power is based on a Snapdragon 662 chipset paired with 4GB of LPDDR4X RAM and up to 128GB of UFS 2.2 storage. The Poco M3 has a tri-tray slot for two Nano-SIM cards and a microSD card that can support up to 512GB of additional storage. The device is available in Power Black, Cool Blue, and Poco Yellow. The device weighs only 184 g even though it packs a 6000 mAh battery. The texture of the backshell resembles leather and does not attract fingerprints. Moreover, the smartphone is equipped with a USB-C port, 3.5 mm jack, IR blaster, side-mounted fingerprint sensor, dual stereo speakers. The Poco M3 costs as follows: For Black Friday on November 27 you can get them for USD 20 / EUR 20 less. 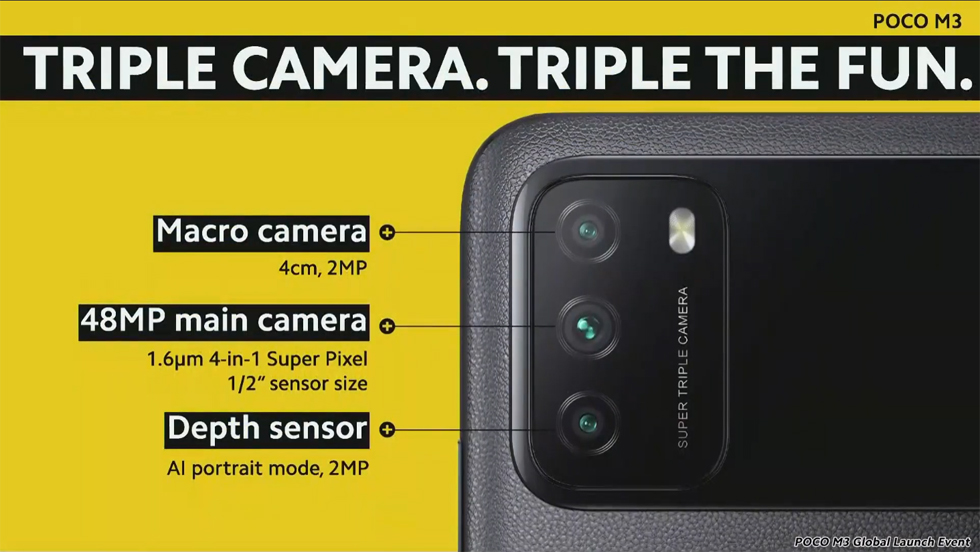 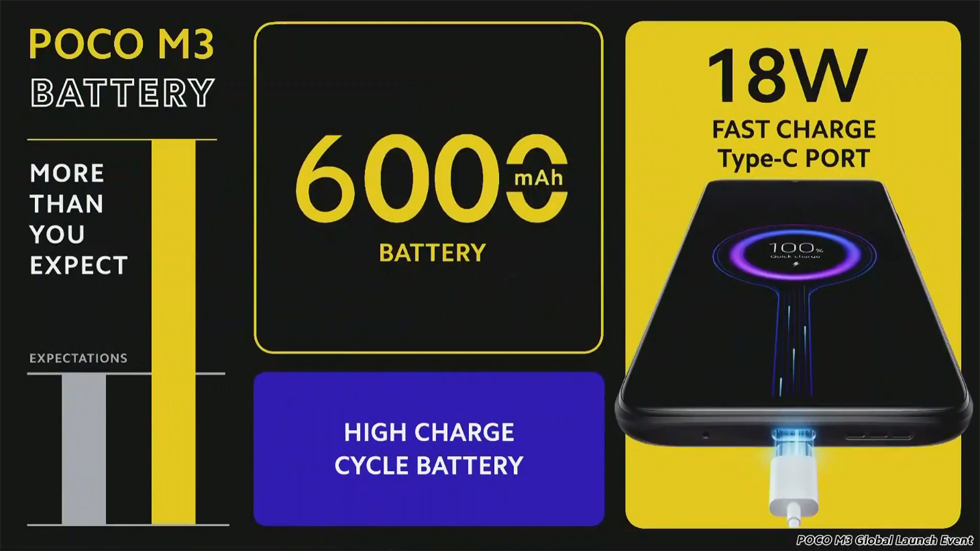 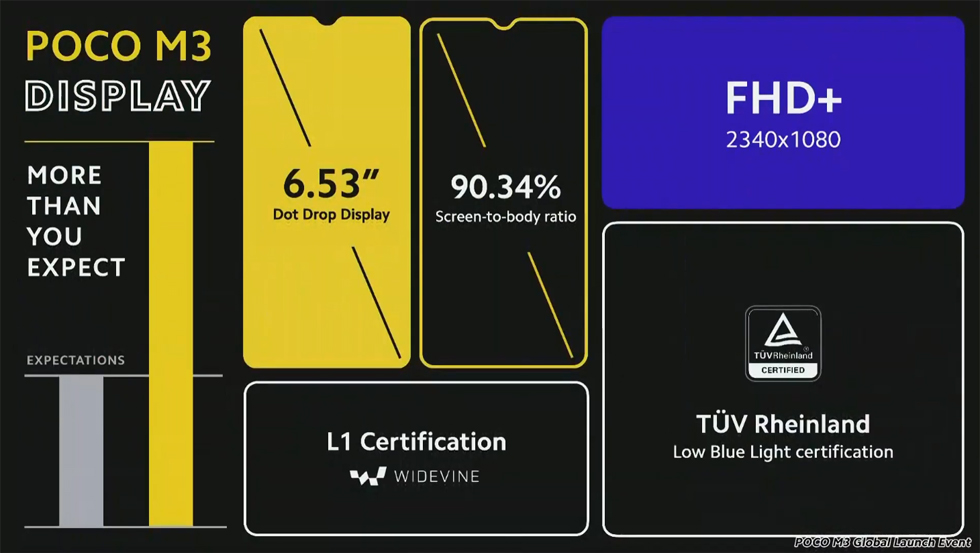 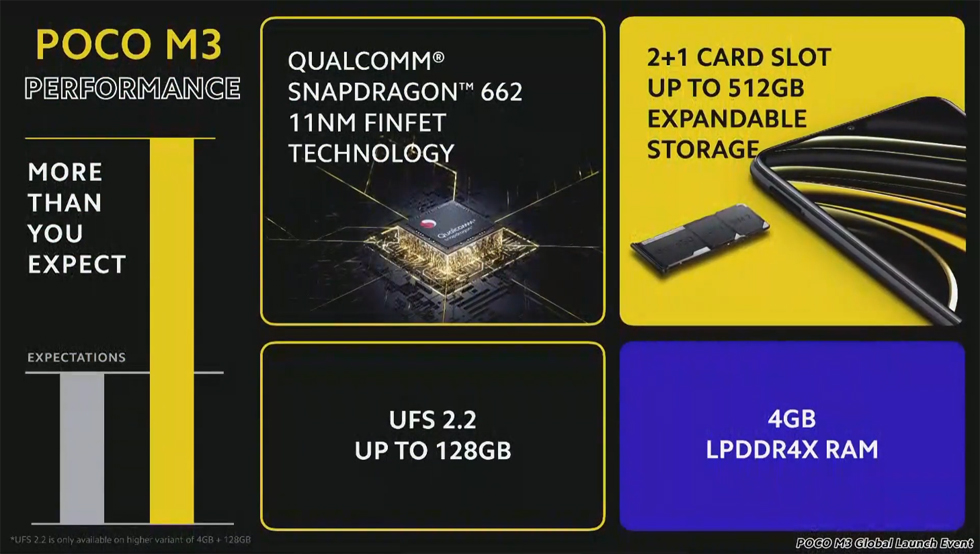 POCO C3 has been just unveiled via an online event. This smartphone has the footprint of the Redmi C9 except that it has a two-tone rear shell design. In more specific terms, this means that the top one-third of the rear shell is polished and the other two thrids are matte. The device evolves around a 6.53-inch HD+ display with a waterdrop notch for the 5MP selfie camera. On the back, there's a tri-camera module...

Poco confirms the Poco X2 moniker, the smartphone will be unveiled in 7 days

The Poco X2 moniker has been officially confirmed on the Poco India website. It also unveils that the official announcement of the smartphone is scheduled for February 4. The page suggests that the device will be powered by a Snapdragon chipset with a heat pipe cooling system. Most probably this will be a Snapdragon 730G platform. Poco X2 will also feature a 120Hz display, a 4500 mAh battery, a 64MP Sony IMX686 main...

Three weeks ago Xiaomi introduced the Poco F1 in India. Today via the Xiaomi India Twitter page it was confirmed that the device is certified splash resistant by P2i Labs​ - the global leader in liquid repellant nanotechnology. Hence, it can undergo every spills and splashes but don't immerse it in water. Meanwhile, Jai Mani, head of the products division at POCO Global said on Twitter that Poco F1/Pocophone F1 does...

Pocophone F1 goes global today with simultaneous events in Paris, Jakarta and Hong Kong. The specifications are already known, so we will focus on the pricing and availability of the model. In Hong Kong, the model will go on sale on August 30th with prices starting at HKD 2800 (€300) for the 6GB+128GB version. In Indonesia, the prices will be cheaper. The 6GB+64GB variant costs RP 4.4m (€260), the 6GB+128GB version...

Pocophone F1 will be globally announced on August 27th

Xiaomi India has just announced the Poco F1 in India. At the end of the presentation, it has been unveiled that Xiaomi will launch the model globally on August 27th with official events in Jakarta, Paris and Hong Kong. The global version will be named Pocophone F1 and should not differ in design, hardware and software from the Poco F1.

Xiaomi India is currently presenting the Poco F1. Evidently, Poco is created to compete directly with OnePlus as the whole presentation up to know contains examples and comparisons that compare the Poco F1 with OnePlus 6 and the new Poco UI with OxygenOS. Xiaomi explains perfectly well, why this new device is really fast. First, it is powered by a Snapdragon 845 chipset with AIE and liquid cooling system for steady...

Pocophone F1 a.k.a. Poco F1 by Xiaomi appears on Geekbench

Xiaomi will announce the Poco F1 in India tomorrow. This is the local-market name for the upcoming Pocophone F1. The device has appeared on Geekbench confirming it will be powered by a Snapdragon 845 chipset and firing up expectations that it will be the cheapest SD845 smartphone in the market. The device that has passed through the test also has 8 gigs of RAM. The model will have a 6GB+64GB variant as well...