Oppo A58 5G is now officially launched in China. This smartphone with a model code PHJ110 is based on a MediaTek Dimensity 700 chipset paired with 6GB/8GB of LPDDR4X RAM and 128GB/256Gb of UFS 2.2 storage. It is powered by a 5000 mAh battery with 33W SuperVOOC fast charging support. The device is built around a 6.517-inch IPS display with an HD+ resolution, a 90Hz refresh rate, 600 nits of peak brightness, 480 nits of typical one, and a Panda glass for protection. It features a V-notch for the 8MP selfie camera. On the back, there's a 50MP main shooter with an f/1.8 aperture, a 5-element lens, and a 77-degree FoV. It is adjoined by a 2MP depth sensor. Oppo A58 5G is fitted with a side-mounted fingerprint sensor, stereo speakers, a USB Type-C port, and a headphone jack. It runs on ColorOS 12.1 based on Android 12 and supports Bluetooth 5.3 and Wi-Fi 5. The 8GB+256GB version (the most expensive one) is priced at CNY 1699 (USD 234). 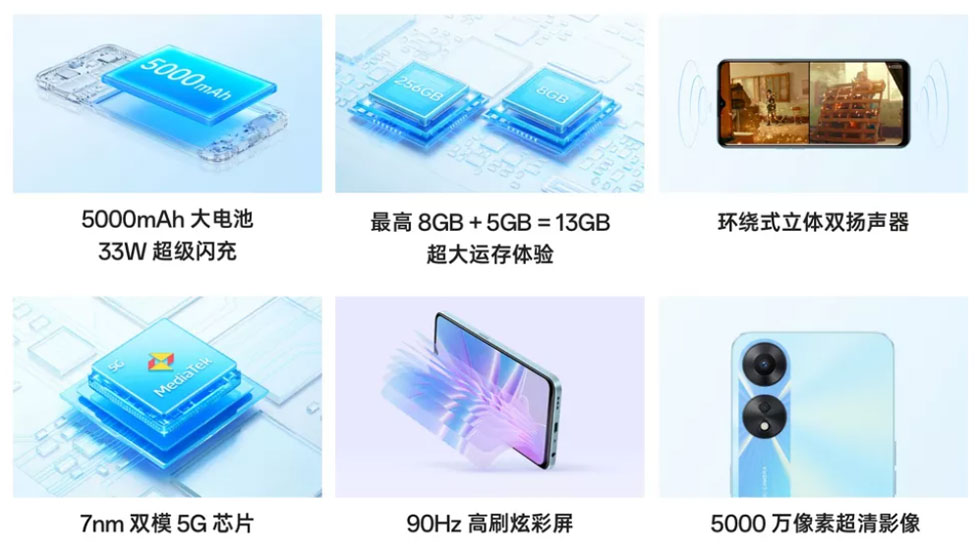 The Oppo K10x was unveiled in China featuring upper mid-range specs and a very affordable price tag. The model is based on a Snapdragon 695 chipset with 8GB/12GB of LPDDR4X RAM and 129GB/256GB of UFS 2.2 storage. The chipset is aided by a Diamond smart cooling system for sustainable performance. The smartphone is powered by a 5000 mAh battery with 67W fast charging support. Its front is adorned with a 6.59-inch IPS...