On November 28th, 360 officially released its first full-screen smartphone - the 360 ​​N6 Pro. However, the N6 sibling did not show up during this event. The president of 360 Li Kaixin has already clarified that these are two very good products and after many internal discussions, 360 has decided to hold a separate conference for the N6. Earlier today, the company has disseminated invites for the event that will be held on December 12th in Beijing. The invite hints two very important qualities in a smartphone - performance speed and long battery life. Yesterday, a 360 Mobile official shared "a picture to understand Snapdragon 630" hinting that the N6 will be powered by this chipset. In a week, all specifications of 360 N6 will be unveiled. 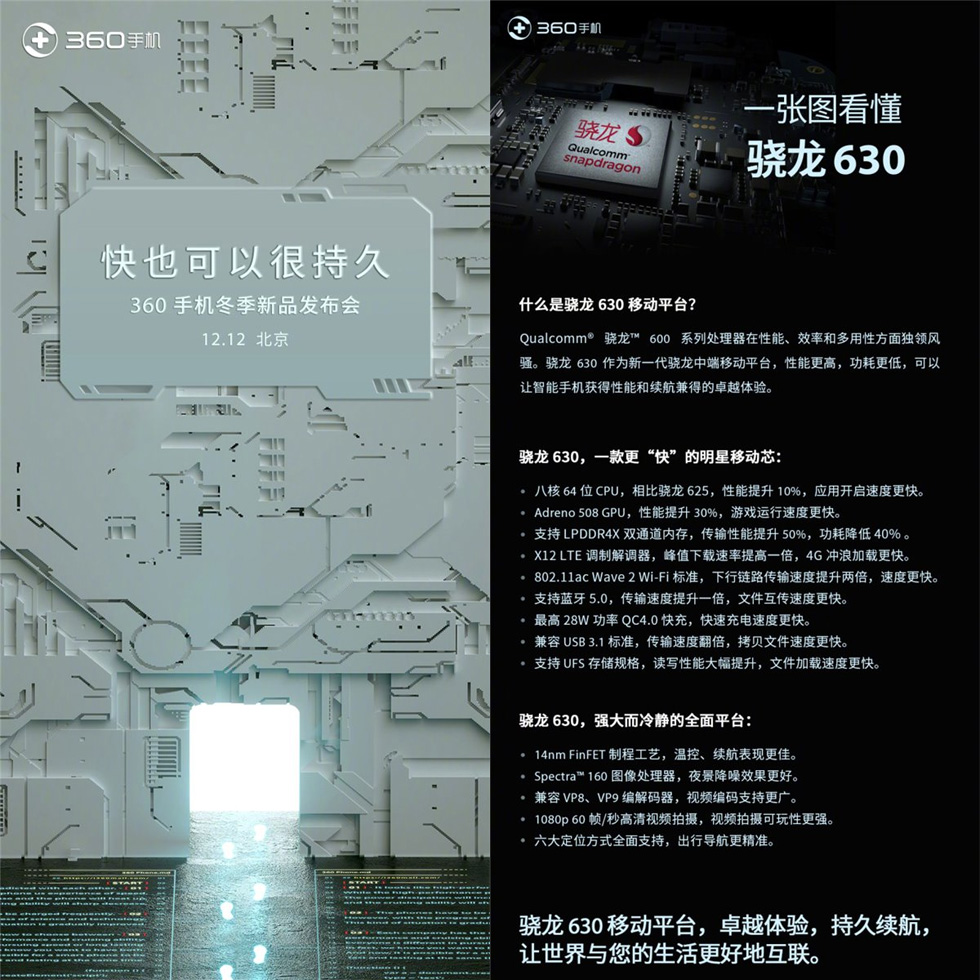 360 N7 is finally official as promised. It is based on a Snapdragon 660 mobile platform with a 2.2GHz octa-core CPU and an Adreno 512 GPU. The chipset is coupled with 6GB of LPDDR4X RAM and 64/128GB of internal memory that can be expanded with up to 128GB. The handset is topped by a 5.99-inch in-cell IPS display with an FHD+ resolution, 450 nits typical brightness, and a 1500:1 static contrast ratio. Above the...

Recently, 360 has announced the 360 N6 Pro - its first smartphone with a full screen, and it has chosen the present day to announce the N6 and N6 Lite. 360 N6 has a 5.93-inch display with an 18:9 aspect ratio and an FHD+ resolution. It takes up 82.9% of the total front surface of the device, according to the manufacturer, and employs a 2.5D curved glass. The model is based on a Qualcomm Snapdragon 630 SoC and the...

As promised, today 360 Mobile presented its latest flagship smartphone - the 360 N6 Pro. This is the company's first model with a full in-cell LTPS display - 18:9 aspect ratio, 5.99-inch diagonal size, FHD+ resolution. It is covered with a 2.5D curved glass which ensures a smooth transition to the metal frame. The back has a 2.5D curved glass cover as well, which due to the NCVM vacuum plating process has a...

The latest 360 flagship dubbed 360 N6 Pro will be announced on November 28th in Beijing. This will be the first full-screen smartphone of 360 and the display will be the main focus of the press conference as the "infinity pool" effect on the invitation suggests that. According to the latest rumours, the device will be equipped with a Snapdragon 660 chipset, 6GB of RAM, and 4000 mAh battery. Its price is expected to...

After visiting TENAA some time ago, the 360 F5 has been officially listed on the manufacturer's website. This an entry-level smartphone with a 5-inch IPS display that has an HD panel with a 2.5D Argon glass on top. Under the display a touch and pressure sensitive home button is positioned that includes a fingerprint sensor with 360-degree recognition. The screen graces a polycarbonate body, which houses a 2000 mAh...

An official poster from today unveils that 360 Mobiles (former Qiku) will hold a press conference in Beijing on February 22nd to present its latest smartphone - the 360 Mobiles N5. The rumoured specs of the upcoming device include 6GB of RAM, a 5.5-inch FHD screen, a 13-megapixel primary camera, a rear-mounted fingerprint sensor, metal body, and a Snapdragon 653 chipset. The battery's capacity is expected to be 3290...

Very similar to the Gionee M6 and Gionee M6 Plus, Qiku or 360 has announced the Q5 and Q5 Plus - smartphones with a bank-level (EAL 5+) security chipset that protects the devices at hardware level. 360 Q5 has a 5.5-inch AMOLED display with an FHD resolution and 100% coverage of the NTSC color space. The typical brightness is 350 nits and the screen utilizes a dynamic color adjustment technology. Power is supplied by...