Apple has just unveiled the iPhone 11 series of smartphones. The iPhone 11 features a dual-camera setup including a 12MP wide camera with OIS, 6-element lens, f/1.8 aperture and 100% Focus Pixel. The second shooter is a 12MP ultra-wide unit with a 120-degree angle of view, 5-element lens and an f/2.4 aperture. The software has been upgraded as well, including new portrait lighting, updated Night Mode, etc. You can shoot 4K videos at 60 fps, slow-motion and time-lapse videos with each of the cameras directly switching between the two from the interface. It supports Cinematic image stabilization and extended dynamic range. The cameras support next-gen HDR and are aided by a brighter LED flash. The front-facing camera is upgraded as well with a 12MP true depth sensor. At the core of the iPhone 11 is the A13 Bionic chip, which Apple said has the fastest CPU and the fastest GPU on a smartphone today. As long as it concerns battery life, the iPhone 11 offers an hour more than the iPhone Xr. The device is also water-resistant being capable to withstand immersion in water up to 2 m for 30 minutes. 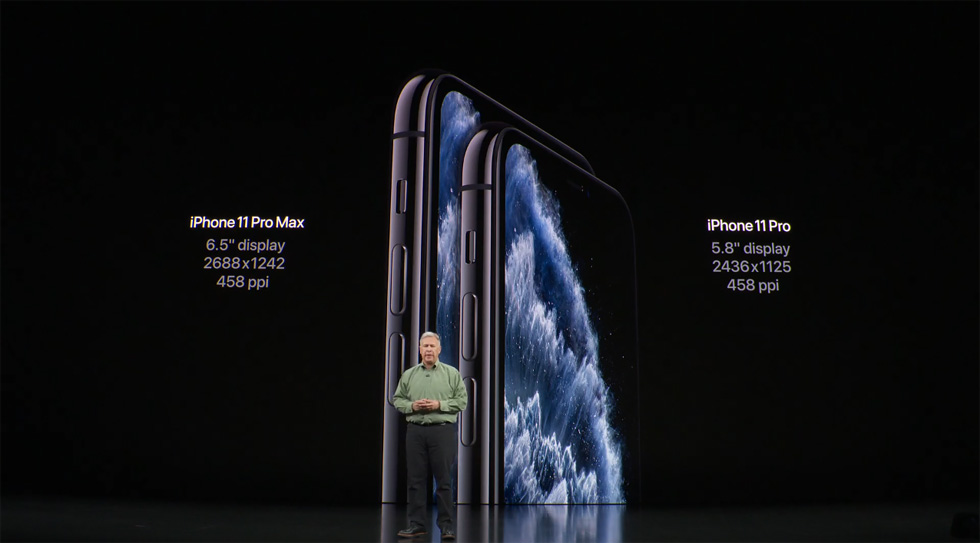 Now it's iPhone 11 Pro turn. The device arrives in two display sizes - 5.8 inches with a resolution of 1125 x 2346 and 6.5 inches with a resolution of 1242 x 2688 pixels. The larger model is called iPhone 11 Pro Max. The True Tone displays are equipped with OLED panels offering 2M:1 dynamic contrast ratio, HDR support, 1200 nits peak brightness. The units have oleophobic coating and support tap to wake. Of course, both units are also based on the A13 Bionic chip just like the base version. In addition, with the iPhone Pro you get 4 hours longer per day and with the iPhone Pro Max you get 5 hours more compared to the iPhone Xs.

The camera department of the Pro models features the same 12MP wide and the 12MP ultra-wide shooters provided on the base iPhone 11 but the Pro models have a 12MP telephoto unit as well. It offers 52 mm focal length, 6-element lens, f/2.0 aperture, OIS and Pixel Focus. Each of the three cameras shoots 4K videos at 60 fps.