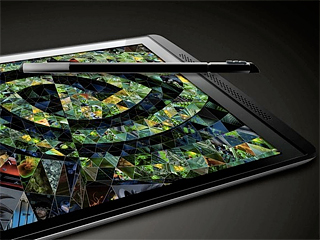 After several weeks of constant rumours and leakages, we finally see the NVIDIA Tegra Note announced. The tablet has gained much attention not only because it is the company's first tablet but also because it employs a different sales strategy. Instead of being rolled out to markets directly from NVIDIA, the Android powered device will be sold to different markets by partners of the company such as PNY, Oysters, ZOTAC, EVGA, GIGABYTE, XOLO and others.

The hardware of Tegra Note is designed by NVIDIA. It will run on a Tegra 4 SoC and will have a stylus. The IPS HD display has a 7-inch diagonal and 1280 x 800 p resolution. The internal storage is 16GB and may extended with a microSD card of up to 32GB. It sports a 5-megapixel camera at its back, which according to NVIDIA is revolutionary because of the powerful processing abilities of the Tegra 4 and several special features and apps. The battery is also said to be awesome with 10+ hours of HD video playback.

It is said that Tegra Note is a gaming tablet and some of its features really point to that. At present it is the “fastest 7-inch tablet” on the planet as NVIDIA says because of its powerful SoC with a quad-core Cortex-A15 CPU, a fifth core for battery saving, a 72-core GeForce GPU. It also has an impressive set of stereo speakers providing high-quality sound. NVIDIA TegraZone is the place, where all gamers will have access to games that are not available on other tablets.Kaynakça
Vivo, MediaTek, Intel withdraw from MWC 2020